Home  »  Newspaper Articles   »   Assad is already counting on soldiers still at school to fill the gaps left by 30,000 casualties – by Robert Fisk 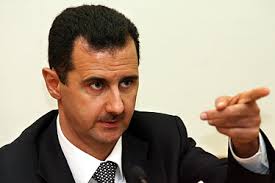 We were driving down the main road from Homs – fast, of course, as the Syrian war now requires – when, just outside the Damascus suburb of Harasta, a government soldier asked for a ride into town.

But this time, our guest was silent. We drove past acre after acre, mile after mile of suburban ruins, greater than I have seen before outside the capital. And then the soldier said to my driver: “I am one of four brothers, all in the army. The other three have been killed. I am the only one left.” One  out of four. I checked that I had heard him correctly. My driver repeated it. What  does that tell you about casualties in  Bashar al-Assad’s army?

We dropped the soldier off near the old Ottoman Hejaz railway station and carried on round Umayyad Square to the dark interior of the Sheraton Hotel. The moment I walked up to reception to tell them I was back, a huge explosion echoed across the empty marble lobby. An incoming mortar round from the rebels around Damascus. It crashed into the square, where three policemen lay in pieces. The suddenness and speed of this war  quickly wears you down.

An interview – long sought-after – swiftly becomes an obligation of annoyance at the end of a day in which you watch a MiG jet bomber as it races north to drop its ordnance on the Syrian army’s next rebel target at Rankoos, along the road from the town of Yabroud. Assad’s soldiers – with a plentiful legion of Hezbollah fighters from Lebanon – recaptured the town from their opponents last week.

But I meet a very old friend who knows pretty well just how the war fares. The government army has now lost more than 30,000 soldiers in three years – that’s more than a fifth of the total casualties of the conflict, most of whom are civilians if you believe those who oppose Assad. But the government in Damascus now calculates  that the next three years of military conscription will raise a new generation  of 20,000 extra soldiers.

There is something Douglas Haig-like about such calculations – adding up your reinforcements by counting soldiers who are still at school. But, in one sense, this is a war unlike any other.

There are intriguing hints that the conflict is changing. There are dozens of mini-ceasefires now, between the remains of the defectors of the fractured Free Syrian Army (FSA) and their former comrades in the government forces.

That’s one reason why the battle for Yabroud last week did not claim quite as many lives as Assad’s men would have us believe. When the army and Hezbollah captured Qusayr in the previous big battle along the Lebanese border, the rebels in Qusayr fled to Yabroud.

So when the government surrounded Yabroud, they were able to call up the rebels on their own mobile phones and talk to them – by name. Release the 13 Christian nuns held hostage there, the insurgents were told, and clear out of Yabroud  … and we’ll briefly hold our fire.

The Islamist defenders of Yabroud apparently executed several fighters who wanted to leave – but leave the defenders did, to live and fight again in the next battle-to-be at Rankoos. But the army won, and it is this increasingly formidable force – let us, of course, remember that the West claims war criminals are among them – that is the one institution in Syria upon which Assad must rely.

He knows it, too. When he visited the wreckage of Baba Amr in Homs, soldiers surrounded the President with the usual cries of self-sacrifice in the cause of Assad. But Assad himself immediately walked over to the state television crew and ordered them to cut the sequence from the evening news. This was the army’s victory, not his.

Only a few months ago, the Free Syrian Army was trying to find an accommodation with the regime, sending middle men to Damascus to talk to representatives of the President. But the government abandoned such contacts when the FSA decided to grab at the American offer of more arms at Geneva – a conference at which US diplomats expressed their displeasure not at the enthusiasm of Assad’s opponents for more weapons, but for their insistence on flying to Switzerland business class – all at the expense of the American taxpayer.

Among the Islamists opposed to Assad, there is now considerable debate – almost to the point of hostility – about their future activities. A new al-Qa’ida faction wants its people to leave Syria and go to fight in Yemen, which is far closer to Saudi Arabia and its oil fields and holy Muslim cities. This, it says, is far more relevant than squandering resources in the wilds of Syria and Iraq.

At the same time, new power relationships are congealing around Syria. President Rouhani has visited Iran’s old friend Oman, and Qatar is just – slightly – beginning to allow its suspicion and contempt for Saudi Arabia to outweigh its enthusiasm for the war against Assad. If it’s true that it paid $60m for the release of those nuns – clearing them out of the way of the Syrian government bombardment at Yabroud – then the Emir of Qatar was doing Assad a favour.

And not without reason. The Americans have abandoned the Syrian war as a lost cause. The US will leave the Gulf. They may well close most of their huge airbases in Qatar, leaving the Emir grimly exposed to the territorial greed of his Arab Gulf brothers. Who else to guard him – and Oman and the other small Gulf states – other than that former policeman of the Gulf, namely Iran?

With a Russian-Iranian-Qatari guarantee of “fair” elections in Syria – please hold your breath, readers – who better to rebuild Assad’s rubbled country than Iran and Russia, backed by Qatar’s wealth? Why, they could even invite the workers of Crimea to give them a hand…

As a student of linguistic garbage, I marvelled at last week’s Obamery. The world concentrated on his interview with a tin-pot San Diego channel – President Obama uses small-town media to avoid giving massive and boring interviews to The Washington Post, The New York Times, CNN and other crippled giants of American journalism.

So it was that we learnt, via Obama-speak, that “we are not going to be getting into a military excursion [sic] in Ukraine.” But it was not this Chamberlain-like determination which caught my eye. It was Obama’s follow-up threat to Vladimir Putin – totally ignored by the press or, when it was recorded at all, reported  without comment – that fascinated me.

“What we are going to do,” quoth Obama, “is mobilise all our diplomatic resources to make sure that we’ve got a strong international correlation that sends a clear message.”

Gadzooks! Achtung! All those mobilised correlations packed with clear-cut messages crashing down upon Russia! Surely the walls of the Kremlin will now come tumbling down.