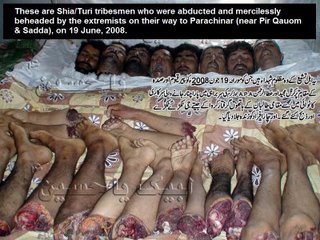 Related posts: Why are Pashtun nationalists mute on Deobandi ideology and identity of TTP-ASWJ terrorists? – See more at: https://lubpak.com/archives/306125

Role of Abdul Ghaffar Khan in the spread of Deobandi ideology in Pashtuns – See more at: https://lubpak.com/archives/306211

Abdul Nishapuri, the founder-editor of this blog, in a tweet asked, “Many, not all, of those who are protesting Pakistan army’s ‘massacre of Pashtuns’ in Waziristan were dead silent on Pashtuns of Parachinar!”

His question did not ruffle any feathers. No Pashtun nationalist or intellectual took it up. Why? The answer was provided by Abdul Nishapuri himself when no one else came forward: “The people of Parachinar aren’t given the status of full Pashtuns as they’re Shias”. Again, no one responded to Mr Nishapuri. No Pashtun refuted his claim by saying that Pashtun Shias are as much Pashtun as Pashtuns of any other persuasion.

Pashtun nationalism is one of the great myths created by both the Pashtun and the non-Pashtun. What is meant by Pashtun nationalism? The answer given all the time is: A Pashtun is a Pashtun as long as he (note: ‘she’ is always absent in this discussion) speaks Pashto. Apparently this is a broad definition. It certainly does not include the biological side of Pashtun ethnicity, if not race. But ethnicity is a problematic issue. There are a number of Syeds/Shahs and Awans who identify themselves as Pashtun and have been in the vanguard of the Pashtun nationalist posturings. Then there is the issue of Khattak versus Khan. Many Khans will unhappily react if called “Khattak”. Thus, language is more potent a symbol than ethnicity when it comes to the Pashtun identity.

But still the issue of Pashtun nationalism remains problematic, and this editorial in no way claims to be able to straighten it out. Being an editorial, it is more of a viewpoint open to falsification than a piece of conclusive research. But hopefully, it can make a few relevant points. We want to begin with the question: What lies at the foundation of nationalism? In other words, where does nationalism come from?

If we consider views of credible theorists of nationalism, we find interesting points. Anthony Smith claims that nationalism is a result of a group’s reaction to modernity. Ernest Gellner stakes his claim on industrialisation. Benedict Anderson argues that it is capitalism and the print media which are at the basis of nationalism. But if we take a look at Bacha Khan’s Pashtun-nationalist movement in the 1930s, we find that all these factors were missing in the Pashtun society of that time. Even to this day, only a city like Peshawar can claim to have some of these factors in operation. The rest of the KPK is more or less a continuation of the past.

There is another view widely subscribed by Pashtun and non-Pashtun researchers that despite Bacha Khan’s movement, the roots of Pashtun nationalism goes back Khushal Khan Khattak (1613–1689). It was against the anti-Pashtun policies of the Emperor Aurengzeb that Khushal Khan Khattak (both Khan and Khattak!) raised a voice in order to unify the Pashtun.

From the brief discussion above, two points emerge. First, the frameworks of the theorists of nationalism are inadequate, and we need a new framework to understand Pashtun nationalism. Second, what is claimed to be Pashtun nationalism is not nationalism but something else. One fact which supports the latter view is that Pashtun nationalism, if there is such a thing, has no territorial claims. In the past, Bacha Khan raised voice for Pashtunistan, but now his own party, the ANP, headed by his grandson subscribes to nothing of this sort. It must be noted here with some emphasis that Bacha Khan was not a nationalist. A nationalist looks ahead. But Bacha Khan was merely an idealist who looked back at the past and regretted its loss. Whatever he thought about the Pashtun of his time, it was done in nostalgic terms. Here is a sample of his ‘nationalistic’ views,

Food used to be simple and because of that people’s health was good, they were not as weak as they are today. There were no spices, no tea. Usury, alcohol and sex without wedlock were considered very bad and if anyone was suspected of indulging in these things he would be ostracised… there was no moral bankruptcy like in today’s world. A guest would be treated to a greasy chicken curry… as far as food was concerned there was no difference in the rich and the poor. The rich and the poor used to dine together. Just like dress and food, houses were simple, too. The huge and comfortable houses of today did not exist, but still the kind of happiness and content that was there in people’s life does not exist today. There were no diseases; men and women had good and strong bodies. Grown up girls and boys would play together till late in the night. They would look at each other as brothers and sisters. Moral standards were very high.

(Excerpted from Bacha Khan’s book My Life and Struggle)

This is the same Bacha Khan who refused to have anything to do with his fellow Pashtun in Afghanistan calling them “those naked people!”

While Bacha Khan must be credited for some things such as emphasizing women’s education and the mobilization of the Khudai Khitmatgar movement, he should not be above criticism. Furthermore, the criticism of Bacha Khan by the Pakistani establishment is both shallow and baseless – that in itself does not mean that valid criticism of his work and activism cannot be made.

Thus it appears that there is no such thing as Pashtun nationalism. Had it been so, the Shias of Parachinar would have been defended by their fellow Pashtuns. But it is at the hands of the Pashtun Taliban that the genocide of the Pashtun-Shias of Parachinar has been going on for over two decades, but not a single Pashtun nationalist voice has been raised against it. No vigils are kept for these Shias. But when the Pakistan Army announces action in North Waziristan, all Pashtun voices—be they leftist ANP, far right JUP, or liberal public and journalistic views—are raised against it calling it ethnic cleansing of the Pashtun.

When people talk about Pashtun nationalism, they are mistaken or do so deliberately. It is indeed the Pashtun worldview which is religious, messianic, and binary. Historically, it is on this principle that the Pashtun have dealt with people and situations. “A Pashtun is a Muslim by definition,” goes the saying. But it is a certain kind of Muslim. It is a crusader-messianic Muslim. Educated Pashtun claim that Ahmad Shah Durrani was the highest point in the annals of Pashtun nationalism. He was notorious for killing Shias. The likes of Tariq Ali claim that the Taliban are anti-imperialist Pashtun nationalists. The Taliban’s recoded of Shia killing is an ignoble as any. The Pashtun Kings of Afghanistan killed the Hazaras in the past not for their ethnicity, but for being Shia. Last, it was the poet Ghani Khan, a son of Bacha Khan, who made an important observation. In his The Pashtuns, he discusses the Pashtun mindset. He regards the Shia Pashtuns as highly intellectual and sophisticated, and notes that they have been a repeated target of Sunni-Pashtun jealousy and anger.

Thus the silence of the Pashtun over the genocide of the Shia-Pashtun of Parachinar has nothing to do with the so-called Pashtun nationalism. It is a result of the Pashtun Manichaean worldview in which the world is divided into good and evil. The likes of Abdul Nishapuri will find no interlocutor. 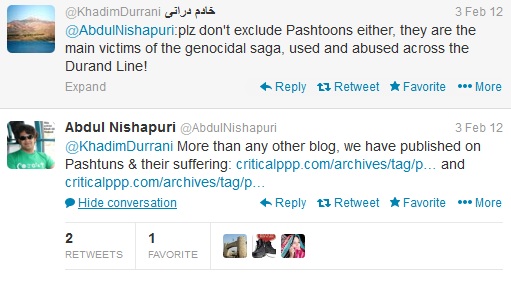 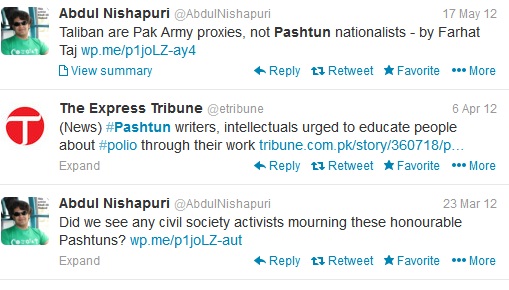 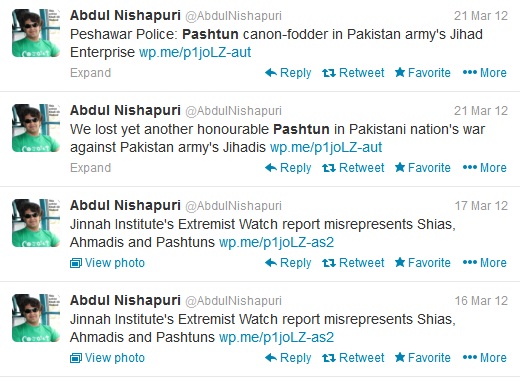