Altaf Hussain, a deputy superintendent of police and a resident was Dera Ismael Khan, had been working as an assistant director of the Anti-Corruption Department headquarters in Peshawar when he was kidnapped on 13 December while returning home from office.

His family members in Dera Ismail Khan contacted him as per their routine, but his phone was out of reach. They called again and again, but could not establish contact with him. On the morning of 20 December, they were informed that his corpse was found outside Mardan. His severed head and body parts were scattered all over the area.

Altaf Hussain was an honest officer and respected for his integrity. This was a reason for his appointment in the Anti-Corruption Department. He had been receiving threats from Takfiri-Deobandis of ASWJ-LeJ, but that did not stop him from performing is duties or living his life as normally as a Shia can possibly do in Pakistan these days.

What is extremely regrettable is that the entire Pakistani media, print or electronic, totally blacked it out. Only a local Dera Ismael Khan newspaper reported the tragedy. 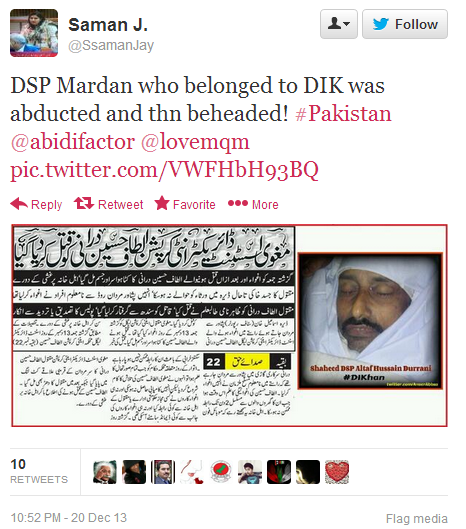 People outside Dera Ismael Khan learned about it from Mr Anser Abbas, a family friends of Altaf Hussain. Interestingly, Anser Abbas has himself been a victim of Deobandi terrorism. In 2009, he host both of his hands in a suicide bombing on a Shia religious procession in Dera Ismael Khan. This brave man now writes tweets with his feet. His story also went unnoticed in the media. 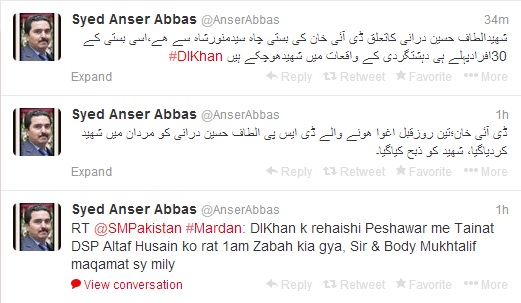 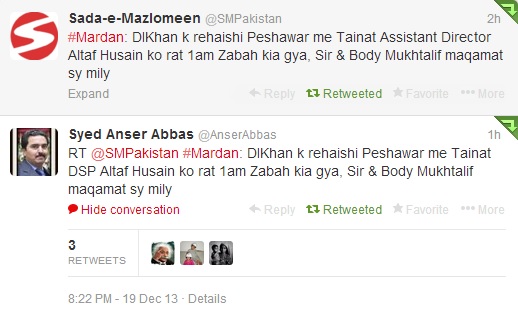 Needless to say, Altaf Hussain’s family is devastated. His wife has almost lost her mind in grief. His brothers, sisters, children, friends, and relatives are in a state of shock.

No words of comfort or condemnation have come from the KP government. While Altaf Hussain was kidnapped, tortured, and cut into pieces, Imran Khan and his KP government were busy protesting against the drone attacks and calling Deobandi Taliban “Our brothers”. Imagine if a Deobandi police officer had met the same fate: the entire media would have gone mad baying for the blood of “Enemies of Islam”. 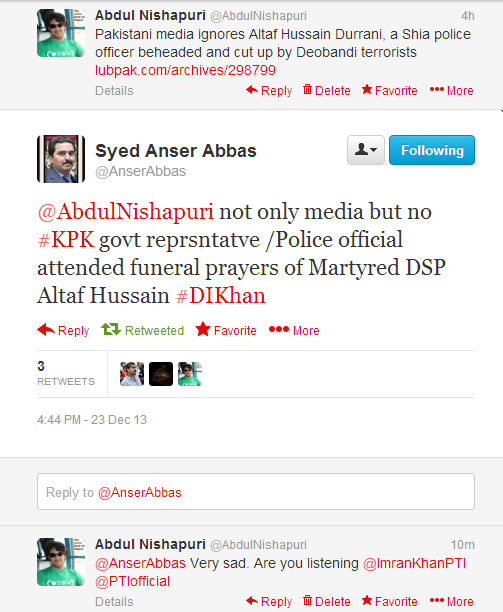