Home  »  Original Articles   »   Why do some people in Pakistan hide Deobandi identity of ASWJ-LeJ-TTP terrorists? 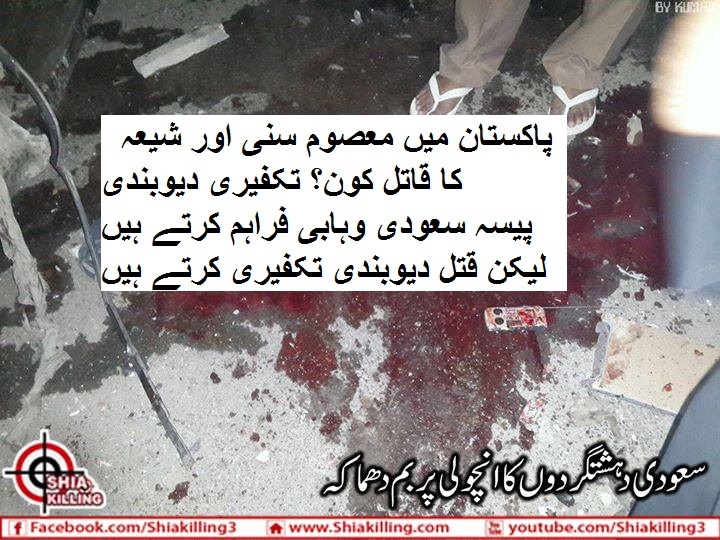 Through a well-crafted plan, Pakistan media and social media have been hiding the common Takfeeri Deobandi identity of the Sipah-e Sahaba (ASWJ), Lashkhar-e jhangvi, Taliban and Jundullah. Some dishonest, coward liberal Sunni and Shia too obfuscate the Takfeeri Deobandi identity of these terrorists. They give those terrorists ambiguous titles like Wahhabi, Saudi, Kharji, Sunni, Jihadi, extremist and Zionists. But they hide the real Takfeeri Deobandi identity of them. Saudi Arabia obviously played a criminal role in raising these Deobandi terrorist groups. U.S.A. has helped strengthen the Saudi Arabian fitna which has to be highlighted and condemned so that the takfeeri Deobandis (that operate with the names like ASWJ, LeJ, TTP etc) who kill Shias, Sunnis, Barelvis, Ahmadis, Christians and moderate Deobandi and Salafi can be exposed. The fact is that the Wahhabis or Ahle Hadith or Salafi living in Pakistan aren’t involved in the killings of Shias and Sunnis.

Deobandi Takfeeri group (ASWJ-SSP-LeJ) is not “Ghair Muqalid”. They are Muqallid (followers) of Imam Abu Hanifa. Calling them Wahabi is against reality. They can be called the foot soldiers or mercenaries of Saudi Arab. But they themselves are neither Saudi nor Wahabi. The fact is that these Takfeeri Deobandi LEJ Taliban ASWJ feel most offended when their real identity of Takfeeri Deobandi is highlighted, and are condemned. Other ambiguous titles like “Wahabi, Terrorist, Sunni. Jihadi etc” neither hurt them nor their agenda. This aspect was highlighted by famous columnist Khursheed Nadeem in his recently published article.

It is a known fact that to date none of the famous Deobandi scholars like Mufti Taqi Usmani, Mufti Naeem, Maulana Haneef Jalhandari, Maulana Fazlul Rehman and Maulana Sami ul Haq have ever condemned the Taliban, ASWJ LEJ openly. Neither have they ever condemned the Taliban LeJ ASWJ for giving objectionable statements against Shias, Sunnis, and Pakistan army. On Friday, countrywide rallies were taken out under the patronage of Takfeeri Deobandi ASWJ which raised public Shia Kaffir slogans. In the rally, ASWJ, JUI, Wifaqul Maddaris, Defence of Pakistan Council and other Deobandi scholars and members openly participated. After the Ashura incident in Rawalpindi, Haneef Jalandari, Mufti Naeem and Samiul Haq spread vile propaganda against Shias and Sunni Barlevis in which they falsely said children were slaughtered. They also demanded ban on Milad and Ashura Juloos. Here is the press conference of ASWJ’s patron Mufti Naeem Deobandi after Rawalpindi Riots

After this Deobandi propaganda, Shia mosques and Imambargas were burnt in Rawalpindi, Multan, Bahawalnagar, Lahore. Shia and Sunni Barelvis were killed in Ancholi by ASWJ. It is time Shia and Sunni Barelvi scholars came openly and without any more compromises condemn these Takfeeri Deobandis. Hiding the identity of these Takfeeri Deobandis is a dishonesty and against the teachings of Imam Hussain and Bibi Zainad S.A.

Who are these Shia and Sunni scholars are serving by sitting with the Takfeeri Deobandi terrorist leaders of ASWJ Taliban?

Are the groups who are called Wahabi or Ahle-Hadith or Wahabi involved in the systematic attacks on Sunni Barelvis and Shias?

Do all the Saudis which include Saudi Shias, Saudi Sunni and Saudi Sufis support Sipahe Sahaba Taliban?

Haven’t Barelvi Sunnis done Takfeer of Deobandis and Shias? If this is the case, then only calling Takfeeri is wrong. They must be clearly identified as Takfeeri Deobandis.

The majority of Sunnis (Sunni Barelvis and other moderate Sunnis) have clearly declared Takfeeri Deobandis involved in violence against and killing of Sunnis, Shias, Christians, Ahmedis. Watch the video 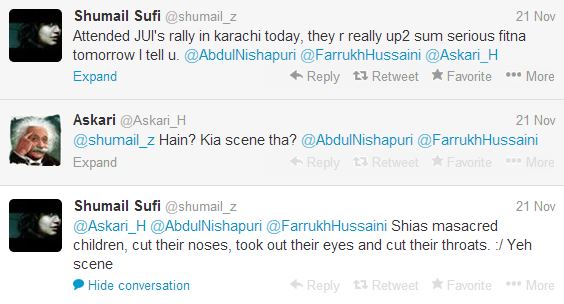 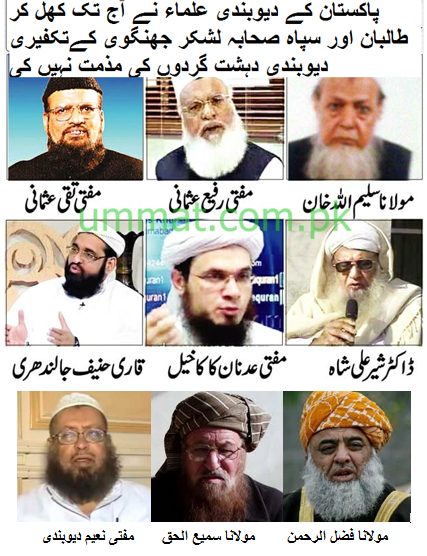 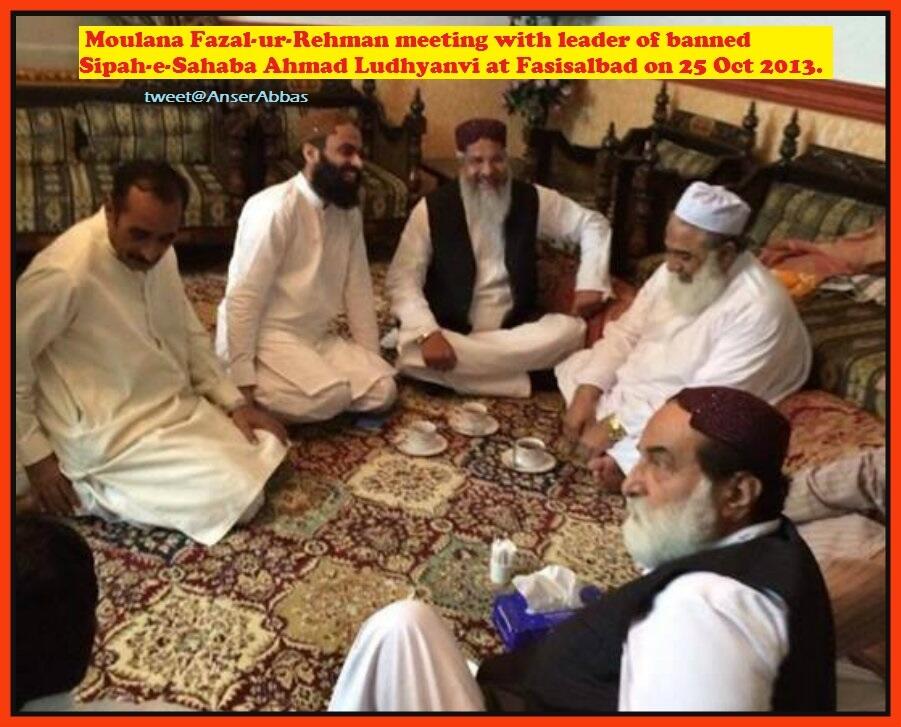 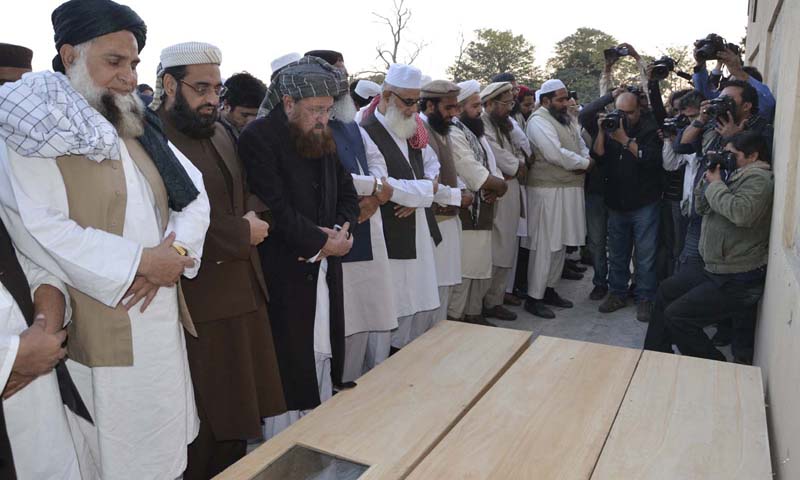 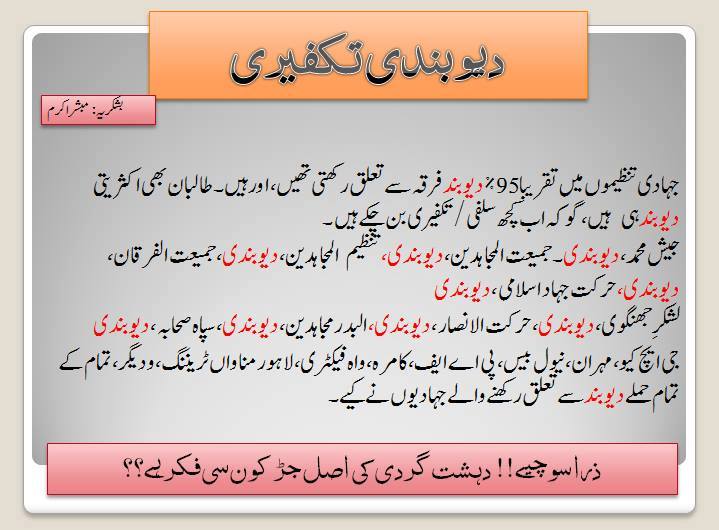