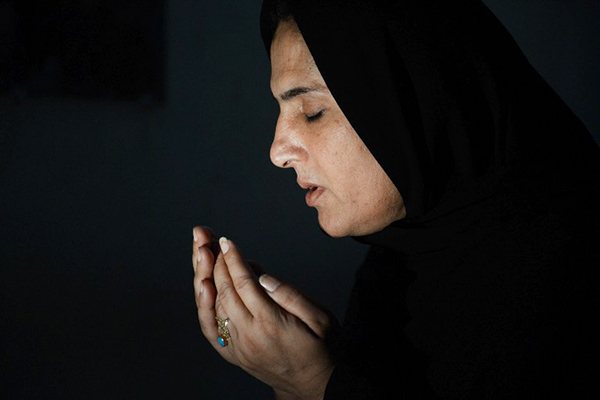 According to the Voice of America, “Eight people were killed when gunmen opened fire on a Shi’ite Muslim religious procession in Pakistan on Friday, hospital officials said, in what appeared to be the latest incident of spiralling sectarian violence”. The VOA further reported, “Most of the attacks are the work of Sunni Muslim extremists, many of whom are affiliated with banned militant groups such as the Taliban or Lashkar-e-Jhangvi, which wants to drive all Shi’ites out of Pakistan. Hundreds of Shi’ites were killed in bombings and other attacks last year, including children gunned down on their way to school and doctors heading for work.” (Read the complete report: http://www.voanews.com/content/eight-killed-in-attack-on-shite-procession-in-pakistan/1791303.html)

International news networks such as Aljazeera and Trend.com gave more or less the same description of the tragic incident.
http://m.aljazeera.com/story/2013111602136312926
http://en.trend.az/regions/world/ocountries/2211791.html
This not the first time that Shia mourning procession in Rawalpindi was attacked by the Deobandis. This happens every year. Last year, the Deobandis staged a bloody attack to the Shia mourning procession killing a number of people (Read: http://www.bbc.co.uk/news/world-asia-20425510).

A great deal has been written on how the Deobandi terrorists planned and executed the attack on the Shia mourners on 15 November. The reader is referred to the following links:
https://lubpak.com/archives/290705

What the LUBP team would like tell the world is the significance of the Ashura mourning processions in Pakistan. On the 10th of Muharram every year, millions of Pakistanis mourn the martyrdom of Imam Hussain, the grandson of the Prophet Muhammad (PBUH). The Saudi-financed Takfiri Islamofascism whose executioners in Pakistan the Taliban are, is against mourning the martyrdom because it, the mourning, is basically a protest against tyranny. We would like to remind our readers that the Taliban belong to the Deobandi ideology which is almost the sub-continental version of the Salafist ideology, the state ideology of the House of Saud. This Deobandi-Salafist syndrome in Pakistan exists in various incarnations such as the Taliban, the Sapa-e-Sihaba Pakistan (SSP), the Ahle Sunnat Wal Jamat (ASWJ), and the Lashkar-e-Jhangvi (LeJ). When the SSP was banned for being a terrorist organization, it re-emerged as the ASWJ with its militant-terrorist wing, the LeJ. All these terrorist outfits are Deobandi, and draw their inspiration and salaries from Saudi Arabia (See: http://www.globalresearch.ca/destroying-a-nation-state-us-saudi-funded-terrorists-sowing-chaos-in-pakistan/5323295).

With this background clarified, we can now turn to the Ashura mourning. As noted above, the Ashura mourning is a protest against tyranny and tyrants. In Pakistan, the Ashura is commemorated in almost every city, town, and village. The Deobandi-Salafi propaganda is that the Ashura is a Shia-only affair because Imam Hussain is a Shia icon. This is a complete lie. Imam Hussain has served as an inspiration to a large swath of humanity. Some of the famous people inspired by his heroism and martyrdom were Mahatma Gandhi and George Bernard Shah. Neither of them was a Muslim, let alone being a Shia. Thus the Ashura mourning processions taken out throughout Pakistan are attended by all who appreciate and honour Imam Hussain’s stand against Yazeed bin Muaviya, the tyrant of the time. These processions are attended by Breivi Sunnis (the majority Muslim denominational group in Pakistan), Shias, Christians, Hindus, Sikhs, and other known and unknown minorities. People of all ages participate in these processions. Only Deobandis-Salafis boycott it calling it a sin to mourn the Imam’s martyrdom. 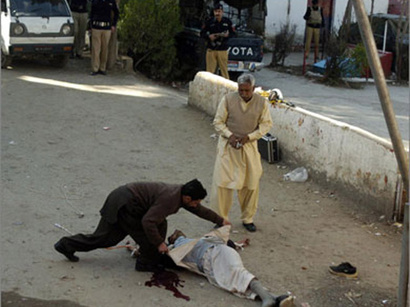 Dead body of a Shia mourner killed by Deobandi terrorists. See the indifferent postures of the policemen.

What, however, makes the Ashura mourning unique is the presence of transvestites (called eunuchs in Pakistan). They beat their chests and recite hymns to glorify the martyrdom of Imam Hussain. Such a multi-gendered mourning processions are not witnessed anywhere else in the world (India being an exception). In Pakistan, the transvestites live in complete abjection thanks to the fanatical values of the people by and large. But it is on the Ashura that they have their own groups mourning the martyrdom side by side with other mourners. This proves the universalist, egalitarian spirit of the legacy of Imam Hussain. The message of Imam Hussain’s martyrdom is that regardless of religion, culture, class, age, and even gender, in their struggle against tyranny and fascism all are equal. A transvestite is as authentic a protestor against tyranny as a Shia or a Hindu.

It is in this perspective that the 15 November 2013 attack on the Rawalpindi mourning procession should be understood. The attack was not one on the Shias only. This is what the Deobandis and Pakistan’s Saudi-inspired media want the world to believe. The Rawalpindi attack, and the Deobandi attacks elsewhere, are in fact an Islamofascist attempt to eliminate religious and cultural freedoms to which various groups—-religious, ethnic, linguistic, etc—-are entitled. 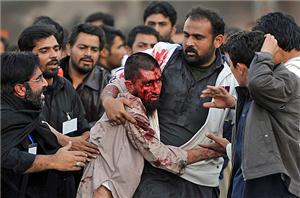 Shia mourners helping a Sunni after the Rawalpindi attack.

Another lie that the Deobandis and Pakistan’s media want the world to believe is that it is the Shias who are the target of various attacks staged in the name of Islam. This is a ploy to make the Shias appear as external to the mainstream Islam. Hardly a Friday goes by when, after the Friday prayer is over, a Sunni Brelvi mosque, in addition to Shia mosques, is not attcked by the Deobandi terrorists. The Deobandi-Salafi agenda is sthat anything which does not conform to their literalist-fascist hermeneutics of Islam should be elimiate through violence. This is the reason that the Deobandi-Salafi terrorists attack targets in the Western world whenever they find an opportunity. This is why, a British/Christian soldier was beheaded in Woolwich (See: http://www.liveleak.com/view?i=d0f_1369235265). This is why, Faisal Shahzad tried to blow up Times Square (See: http://www.telegraph.co.uk/news/worldnews/northamerica/usa/7845258/Times-Square-car-bomb-suspect-Faisal-Shahzad-pleads-guilty-in-terrorist-case.html). And this is why, Afia Siddiqui, the Lady Taliban, said that she wanted to convert the entire United States of American to Deobandi-Salafi Islam (See: http://frontpagemag.com/2013/mark-tapson/aafia-siddiqui-repaying-opportunity-with-terror/).

Thus, the fight against the Deobandi-Salafi Goliath is not solely a Shia fight. Shias have been fighting against tyranny for 1400 years, and they will continue to do so. This fight is not a solely religious fight either. It is a fight for the survival humanity which includes all cultures, religions, and socio-political associations. This is a fight for the future of men, women, and their children world over. This fight is for the dignity of all including transvestites. The world must not be deluded by the Deobandi-Salafi propaganda. This is a fight in which the very basic principles of civilized living are at stake. This fight must be fought by all. And won.