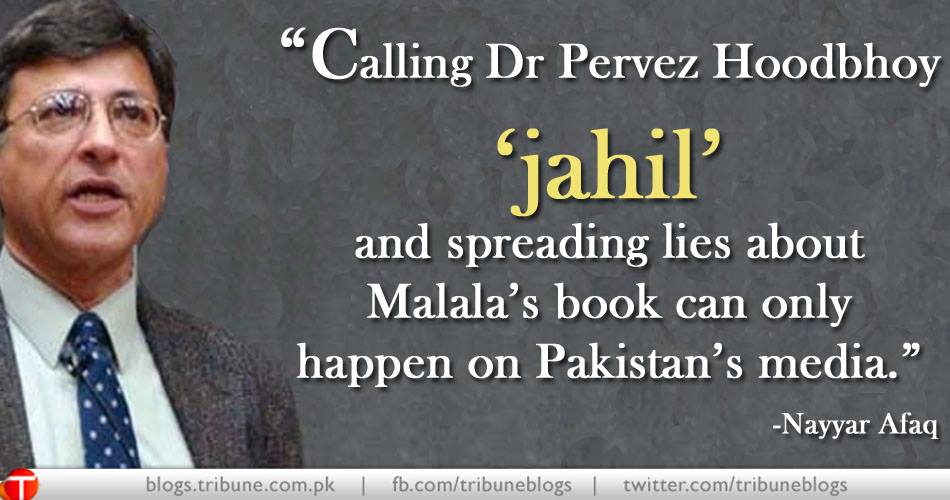 LUBP is publishing Dr. Pervez Hoodbhoy’s letter, in which he briefly summarizes the whole episode of Kamran Shahid’s planted show.

Because some facts are being widely misinterpreted, I would like to set the record straight.

1. The anchor, Kamran Shahid, telephoned me repeatedly to invite me to his program. I was reluctant because of my demanding academic schedule but he insisted that it was very important to counter the wrong trends that we see in Pakistan and for people like me to raise their voices. I agreed to participate, not knowing that he had also invited the media extremists, Orya Maqbool Jan (OMJ) and Ansar Abbasi (AA). He had deliberately withheld those names from me, although I had asked who else would be on the show.

2. Dunya TV sent a DSNG unit to my house in Islamabad. I could hear but not see the anchor or the other guests. During the shouting match that developed during the program – a consequence of OMJ and AA savagely attacking Malala Yusufzai and misrepresenting the contents of her book – I naturally thought that my voice was getting through to the audience. I was wrong.

3. This program was about the book “I Am Malala” but I had not been thus informed. Else I would have had a copy in front of me to refute the inventions of AA and OMJ. Therefore I had to rely on my memory rather than have access to the exact text.

4. The next morning, when the program had been loaded on to the internet, I was astonished to note that the audio level from my end had been turned down so low that my voice was inaudible. However AA was hurling abuses against me and these were coming through loud and clear. I also noted that AA and OMJ would occasionally appear full-screen whereas I was shown as a tiny image even when speaking. This was clear manipulation and bias at the technical level.

5. After some time had passed, the audio was abruptly turned off from my headset. I naturally thought that the program had ended, perhaps prematurely. So I took off my headset and walked away. What else was there to do? But, on watching the televised program, I realized that they had kept the video camera on! The program was actually in the final stages and AA (full screen) had been given the full opportunity to vent his venom on me. The anchor said that I had left the program. This was a complete lie.

To conclude: I DID NOT WALK OUT. Using google, I discovered that several blogs/newspapers have reported that I walked out in defeat.

These are gutter tactics. Sadly, in pursuit of ratings, Dunya TV is pandering to the extremist right wing.

Again, thank you for bringing up the matter.