Editors note: We are cross posting a great article by Omar Ali on Press TV mistaking satire for real. Indeed we all expect better from Iranian Press TV. A large number of other ignoramuses quick to jump on the hate driven locomotive of “hate Malala”.  So widespread was the absurdity, that Dawn had to publish a disclaimer on this article qualifying it as satire. Some reaction on social media is added. 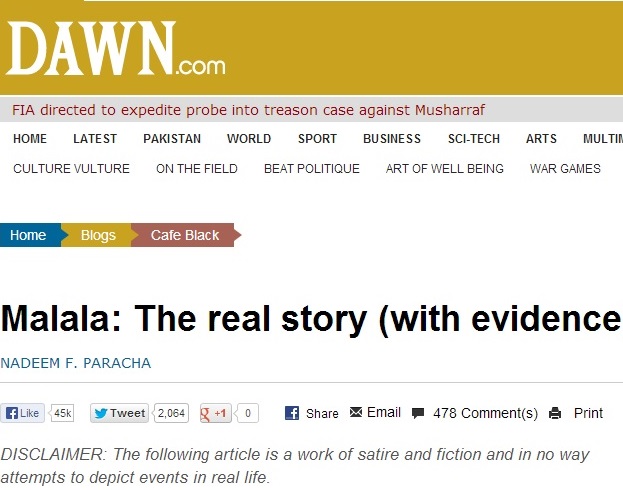 Yesterday, Pakistani columnist Nadeem Farooq Piracha wrote a satirical column about the Malala conspiracy theories in Pakistan. It was so over the top that many people objected that it was not really funny as it should have been more subtle and deadpan.

Well, they understimated the power of America-hatred.

People on social media wrote tweets about this “revelation” published in Dawn News. OK< that’s just social media. There is no shortage of morons in the world, etc etc. But then Iran’s somewhat sophisticated propaganda site PRESS TV took the bait, with hilarious results. The original link was http://www.presstv.ir/detail/2013/10/11/328780/truth-about-malala-fraud-unearthed/

This link now takes you to some generic Press TV page. The Iranians were stupid, but not THAT stupid. They took it down. Luckily, we have a screenshot.

btw, a facebook post about the same topic on a Pakistani Nationalist page (a FB page with over 1 million likes) and yes, they have NOT taken it down:

If you cannot read Urdu: basically saying Dawn News has made sensational revelations about Malala, It turns out she is actually a Polish girl, given to her so-called parents by foreign missionaries, her real name is Jane and so on…the guy in the spider man costume is labelled “Pakistani secret agencies officer in disguise reveals details”.
I kid you not.

PS: it gets better and better. The guy who wrote the “news item”
for PRESS TV is a pakistani journalist from Lahore who edits “The Lahore Times” (billed as “a voice of unheards). He STILL has it posted on his own site. Enjoy. Enjoy.

PPS: someone asked me on twitter if I expected any better from Iranian TV? I have to say I did. An ancient civilization with a sophisticated literate culture. Even the Arab conquest could not kill off their genius. But it has left its mark.
I have to post Mirza Ghalib’s lament on the fall of ancient Persia to the Arabs (translation later, I have to run) 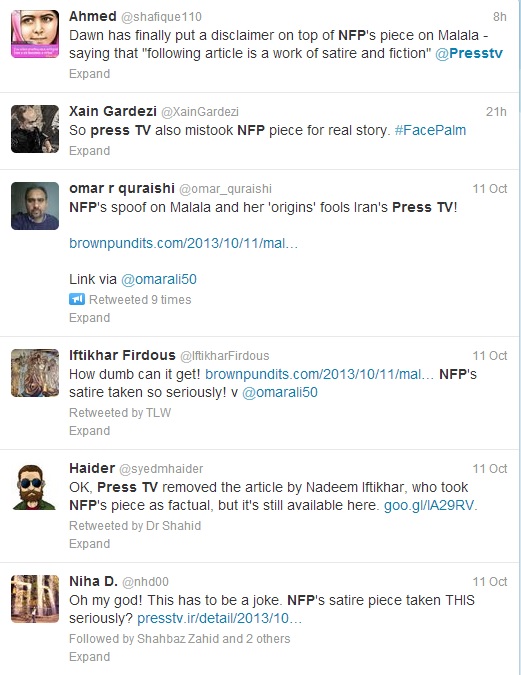 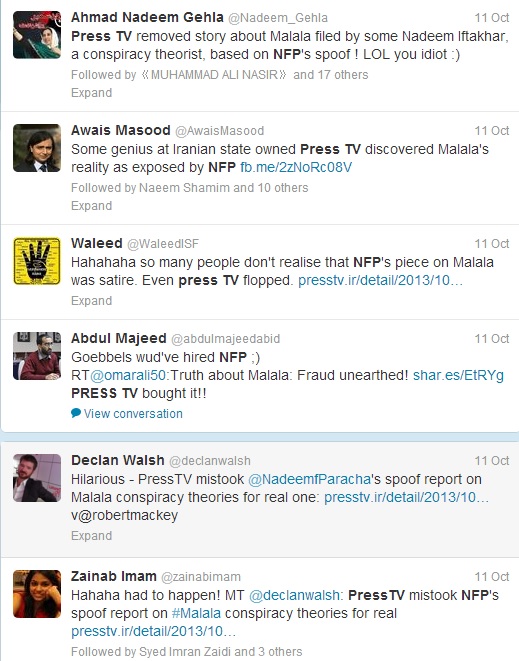