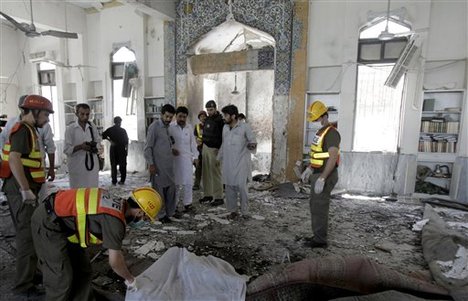 This Past Sunday morning witnessed another act of genocide at the All Saints Church, one of the oldest place of worship built during the British Colonial time in the Pakhtun khuwa capitol of Peshawar. According to the latest reports, over 78 Christian worshipers that included women and children were slaughtered by the genocidal gang belonging to Al-Qaida. A few months ago, as part of the Takfiri Deobandi Wahhabi Salafist’s  Shia Genocide agenda,  hundreds of Shia Muslims  were butchered, first in Quetta and a short while after that in Abbas Town and later in Parachinar. Also desecrated and demolished were a bunch of Churches in the City of Lahore, and Shia Mosques in various vicinities of Pakistan. So continues the carnage of destruction and bloodshed in a country, which at the time of its creation  in 1947, showcased the white portion of its flag as a statement, guaranteeing the protection of its minorities. For the past 35 years, though, one mayhem after another, by the Takfiri Deobandi Wahhabi Salafist elements  has produced an endless count of maimed and dead members of its citizenry, however neither the Military nor any Civilian government has been able to contain these evil elements much less eradicating them from the civic and political fiber of this republic.

A similar act of gruesome criminality took place in Niaobi Kenya, only a few hours later, where the Takfiri Deobandi Wahhabi Salafist inspired Al-Shabab, another affiliate of Al-Qaeda attacked an upscale Shopping Mall, killing over 65 people, and the count continues to mount, as these terrorist are still at work. Some of the wounded victims clearly heard the members of Al-shabab gang calling Muslim shoppers at the Mall to get out of the way, thus substantiating the fact that the targets of their malicious mission were only Non-Muslims. Christians in particular, whether they are the Coptics of Egypt, Cheledanians of Iraq, Maronites of Syria & Lebanon, Catholics & Protestants of Pakistan, and a few others, are the most appealing targets of Al-Qaida and its ruthless groups. As long as the suicide bombings remains an option as the single most powerful weapon on this global landscape of tyranny and terror, there is not much any power, Western or other is willing to entertain so as to stop this daily bloodbath.

Saudi Arabia along with its underlings the Gulf States that are infested with the  powerful religious foundations, are those financial as well as physical centers  of recruitment for these Suicide bombers, their indoctrination and finally their deployment to countries such as Afghanistan, Pakistan, Iraq, Syria, Lebanon and numerous parts of Africa. Pakistan in particular has been the foremost laboratory of Salafists domination and control, where thousands of Takfiri Deobandi Madrassas, have already been established and are busy producing the raw material which will become terrorists and suicide bombers. Gruesome acts first on its Shia Muslim populace, then on Christians and finally on those moderate Sunni Muslims (Barelvis) and Sufi Sunnis, who vehemently reject the teachings of the most intolerant brand of Salafist Islam. An organized strategy formulated by the three aforementioned groups can curtail the advancement of Deobandi Wahhabi & Salafist doctrine to a great extent. It should be noted that in the context of Pakistan Deobandis or Ahle Hadeeth (Salafist or Wahhabis)  make up a tiny sliver of the population, the most generous estimates would place them at 10 to 15 percent. However the Wahhabi Salafist Deobandis dominate the entire political space, they own an operate eighty percent of the Madrassas (terror factories), they have their paid agents in all levels of the Pakistani media and establishment. It is time for the suffering majority (coalition of Sufi Suni Sunni Brelvi Shia Ahmadi and Christians) to stand up to the terrorists and agents of the dark lord Saudi Arabia.

Simple Condemnation of such heinous acts by arm chair scholars and pseudo intellectuals are for the sissies.

We call this mouthing of platitudes as the cowardice of complacency.  The moment has arrived to take this case for humanity to another level by exposing this Deobandi Wahhabi/Salafi Mafia onward to the corridors of power. United States, and the other Western states that were so trigger happy in cases of Libya and Syria can be brought in to this arena through the good offices of the United Nations, the Vatican and a few Human Rights/Civil Rights organizations. Russia is extremely fearful by the Al-Qaeda infusion within the ranks of its Chechnyian population and so are a few other countries such as India, China, and Indonesia who constitute a large population block and are willing to be stakeholders in this endeavor to eradicate the curse of terrorism in its tracks.