Home  »  Featured • Original Articles   »   Is This The Pakistan That Jinnah Wanted ? – Pakistani Meem 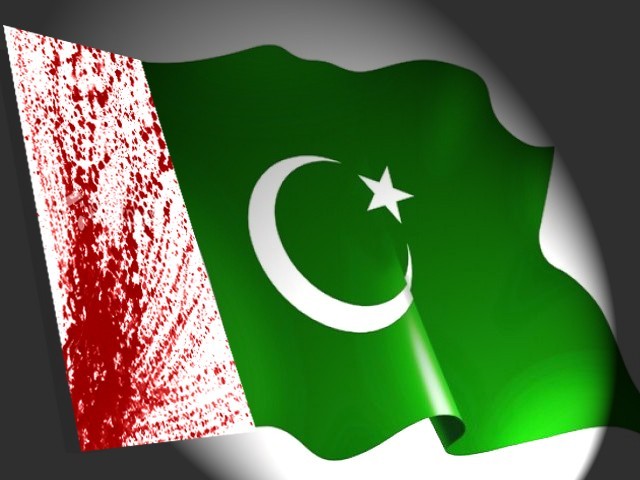 Pakistan came into being on 14th August, 1947, it was a dream come true, the Muslims were jubilant to secure a separate homeland for themselves where they would be free from the subjugation of a majority, Pakistan was created for a minority that felt insecure in India, Quaid e Azam Muhammad Ali Jinnah realized this very well and he wanted all citizens of Pakistan to be equal citizens therefore on 11th August, 1947, he addressed the Constituent Assembly of Pakistan, he said :

These words spoke aloud that he wanted Pakistan to be an egalitarian state, he left us on 11th September, 1948 and since his death we left the path that our Quaid wanted us to follow, just a few months later on 12th March, 1949, Objective Resolution was presented in the constituent assembly which asked for Islamization of Pakistan, the only member to object it was Mian Iftikharuddin, who pointed out at the above words of Quaid but he was ignored, there are many who say Jinnah wanted Pakistan to be a secular state, then there are many who argue that he wanted an Islamic state, this battle between the seculars and the islamists continues till date, the islamists even allege that these are not the words of Quaid e Azam but the history has been distorted by Justice Muhammad Munir, their allegations don’t hold weight for two reasons, one that this speech is present in all history books written in and outside Pakistan, they can also go and read the Jinnah papers if they wish to confirm it, second reason that also nullifies their claim is that had Jinnah wanted a Pakistan according to their wishes, they would have never called him “Kafir e Azam” nor would they have ever opposed the creation of Pakistan.

It was after Pakistan was founded these mullahs started to lobby for an Islamic country where they could rule, in 1953, Anti- Ahmediya riots broke out in Lahore, around 200 Ahmadis were killed, martial law was imposed in Lahore, martial law authorities awarded death sentences to Madoodi and his accomplices but they were later converted into life sentences, here the state totally gave in to the Mullahs, later on a dictator like Ayub was forced to amend the constitution of 1962, because the name of the country did not contain the word “Islamic Republic”.

In 1974 the state declared Ahmadis to be non-Muslims and during Zia’s Islamization era, we witnessed a massive increase in radicalization, a new breed of “Muslims” was prepared, it was in this era that an ordinary mullah from Jhang, who according to the people of Jhang used to roam on a cycle with an axe on the backseat made a career out of slogans like “Kaafir Kaafir Qadiani Kaafir” , “Mushrik Mushrikh, Barelvi Mushrik” and then finally sticked with “ Kaafir Kaafir Shia Kaafir”, the 80s witnessed a new tide of killings and persecution, the Ahmadis were already being persecuted by the state, but then came the Shias for whom it has been open season since the 80s, they today call it Shia Genocide, hardly a day passes in this country when a Shia is not shot dead for being a Shia.

The state has always been numb and never showed a concern about the killings of Shias, when a few are shot dead, no one cares, when a big number is killed in a bomb attack, the President, the Prime Minister would just condemn it by sending a message to the Press Information Department that would forward it to the media channels, no one is sure whether they even know of these incidents or is it just their press secretary who forwards a message on their behalf, the response of leaders of other political and religious parties is quite the same, and then we have a Jamat e Islami that can only protest for the Rohingyas of Burma, Morsi of Egypt, for JI in Bangladesh but can’t condemn the killings of their fellow countrymen.

The tale of the Hindus and Christians is no different, they are very poor and backward, the state didn’t do anything to uplift them, they are persecuted under the blasphemy laws, they are forcibly converted, their daughters are kidnapped and forced to marry the influential while the state shows no concern, in 2011 the minister for Minorities, Shahbaz Bhatti was shot dead in broad daylight in Islamabad for he wanted to bring into light the misuse of blasphemy laws, he had always been a defender of the rights of minorities but in this country sane voices are silenced, all dissenters are killed, Salman Taseer, the governor of Punjab was killed by a policeman who was supposed to protect him and should have been ready to die for him, Taseer’s only crime was to show his support for a Christian lady who was accused of blasphemy.

The case of Ramsha Masih is still fresh in our memories, we all remember how a mullah used the blasphemy to law to accuse a Christian girl who was 11 years old and suffered from down’s syndrome, according the law of Pakistan, a child under the age of 12 years can not be held responsible for a crime that he committed because he is not sane enough to understand the fact that what he did is a crime, so many alleged she was 14 or 16 and some even alleged that she was 21, well even if we ignore her age, the girl suffered from down’s syndrome which again means the girl was not mentally sound to understand what she did but the reality is that she did nothing, the mullah in order to get the Christians driven out of that area in Islamabad, put a few burnt pages of Noorani Qaida (a small booklet to learn to understand arabic) in her bag.

What happened in Joseph Colony, Lahore is not an event of the past, the poor Christians of that area lost their houses after a fight between two drunk men belonging to Christian and Muslim communities, the Muslim alleged that his Christian friend had insulted Prophet Muhammad (PBUH), what happened later throws light on the amount of intolerance that the new breed of Muslims that was prepared in the Zia era suffers from, later on it was learnt that Joseph Colony was situated in an industrial area and the industrialists had been trying to buy that land and their involvement in this arson can not be ruled out.

The Hindus of Sindh are considered to be the original inhabitants of Sindh, they have been living here from time immemorial but today, they are leaving the country, most of them are moving to India and seeking asylum there, they say Pakistan is not a country where they consider themselves safe, their concerns are genuine, their daughters are kidnapped and forcibly converted and married, they don’t get police protection, neither they find the courts helpful, forcible conversion of Hindus has become a norm of the land. They also blame extremism and discrimination among the major factors behind their migration.

The Barelvis or the Hanfis make up a majority of Pakistanis, they were the followers of the Sufi tradition and were the staunch believers of the message of peace and co-existence, they are also being killed by the takfiris and one can not ignore the fact that they too have radicalized, their support for the murderer of Salman Taseer points at the direction they are going, but despite this, they are pacifists whereas the Takfiri Deobandis are just killing every dissenter, they want to enforce their agenda, they want Pakistan to be a Wahabi Republic instead of an Islamic Republic, the state has been silently approving all their acts and today the government is under their influence, a large number of youngsters are under the influence of Takfiri Deobandis because they own around 70% of the total madressas in Pakistan while their percentage in total population is not even 20%.

Looking at this alarming situation, one wonders when a minister and a governor can be shot dead in Islamabad in broad daylight, a Christian girl can be accused of blasphemy by making a false case against her by the mullahs, a Hindu girl can be abducted, forcibly converted and married and no one cares, Shias are killed on daily basis because the mullahs call them Kaafir, Ahmadis face a general hatred and their persecution has been legalized by the laws, all this points at the road we are going on.

Today in Pakistan the people blindly follow the mullah, even the sighting of the moon has to be decided by them and that too is not always a unanimous decision, they don’t consider a DNA test to be a conclusive evidence in a rape case but they wish to meet 4 witnesses who actually saw the commission of the offence, how hard is it to understand that rape was not known back in those days and the Ayat in the Holy Quran that asks for 4 eye witnesses was specifically revealed for Qazf (wrongfully accusing a lady of having an extra-marital intercourse) but no, we have just surrendered everything to these mullahs, so we should just shut up and listen to them.

Looking at the Pakistan of today and the Pakistan that Jinnah actually wanted, I am forced to say that we have redefined his words and today they are:

The current situation has been beautifully depicted in this cartoon by Sabir Nazar, a well known satirist of Pakistan. 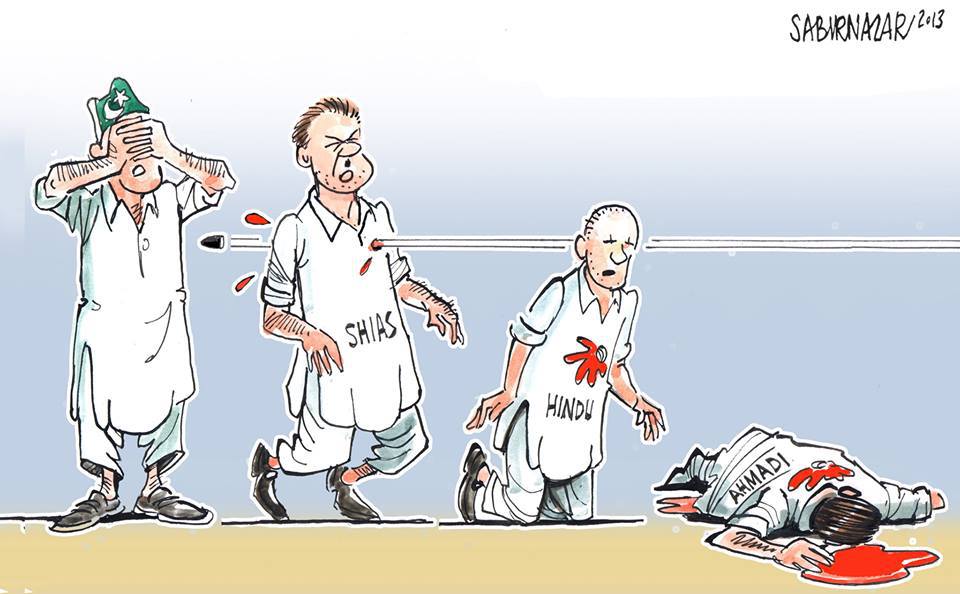