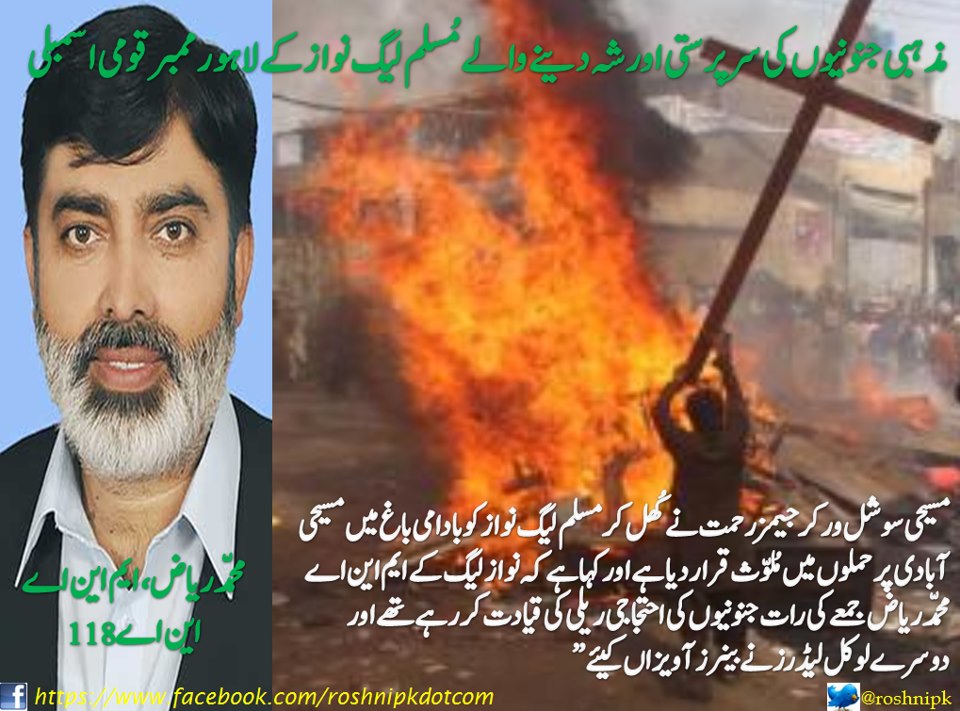 Editor’s note: The following article (originally published in daily Dawn) offers clear evidence that PML-N leaders in Lahore, along with their Takfiri allies ASWJ-LeJ, played a key role in leading a procession of brainwashed Deobandi-Sunni youth to attack and burn more than 100 Christian homes in the Badami Bagh area. Given that PML-N has in the past taken no action against Takfiri Deobandi ASWJ terrorists involved in Ahmadi massacre in Lahore, Christian massacre in Gojra and Shia massacres in Chakwal, Khanpur and Rawalpindi, there is little hope that Saudi-funded Messrs Nawaz Sharif and Shahbaz Sharif will take action against the PMLN-ASWJ culprits responsible for recent ransacking of Christian properties in Lahore.

Cries for a lost home(land)
by Xari Jalil

LAHORE, March 9: “Burn us too!” wails a woman, her hands repeatedly hitting her head. “Did they leave us alive to see all this?” Her tears stream down her face and her nose is red and swollen. In one of the doorways, a mother and son stand hugging each other and weeping as if someone has just died. “They took everything from us…” sobs the boy. “Those robbers took everything we had worked hard for.”

Not many of the homes in Joseph Colony are left intact. They are now skeletons, empty shells, housing nothing but ashes.

The Christian families, who had been shifted one night ago for ‘safety’ as the police told them, only came the next day to find out that all of their belongings and all their assets – in fact everything that they owned had been ransacked, robbed, and the rest mercilessly burnt to the ground. All because one man from among them was accused under Section 295-C: an accusation which has not been proved.

While the police remain guarded, only carefully revealing any kind of information to the media, and the Muslim community prefer to remain mute, the Christians are ablaze with fury.

“There are about 250 families in total,” says Aslam Masih. “Each family has faced a loss of about Rs0.8 to Rs0.9 million, and this figure is the lowest I am talking about.”

Mariam Bibi stands in her doorway peering inside. She cannot step inside because the ashes are still white and burning, and acrid, black smoke fumes out angrily.

“We saved every penny to collect for my daughter’s dowry,” she sobs. “In one night they have left us homeless and out on the streets. Where will we sleep now?”

A teenaged boy says the mob comprising hundreds were ruthless. “It was all preplanned. They had planned this attack on us from Wednesday thanks to a brawl between Saawan, and Imran. But they targeted us three days later, and pretended it was about blasphemy. They even threw our goats into the fire alive. They burnt our motorcycles. They stole whatever they could.”

“For the families their assets were their children,” says Gulnar Gill, executive director of Canadian Human Rights International Organization. “They simply fled for safety when the police told them to otherwise maybe lives would have been at stake too.”

An old man crying over the pages of a burnt Bible, murmurs through tears: Our Gods are not different….we were always brothers…why do they do this to us?”

Joseph Francis from CLAAS (Centre for Legal Aid Assistance based in UK) says that the whole issue is a farce. There was never any religion involved.

“If the truth is really understood this was just a trivial drunken fight,” he says. Despite this we handed over Saawan to the police but they still did this.”

Francis says if the mob was so angry about a blasphemy accused, how was it that they waited three whole days?

James Rehmat, a Christian worker, openly accuses the PML-N government of actually patronising the mob. “Some top leaders of the N-League, including Malik Riaz (local MNA) led the procession. On Friday night, another local PML-N leader came and had banners put up against blasphemy,” he points upwards to freshly put up cloth banners saying ‘The penalty of blasphemy is only beheading’.

“But we don’t see any politicians or other higher ups in this area after this incident although a whole day has passed by. How is it that all these incidents against us happened during the Shahbaz-Nawaz government?”

This relays a reaction to the angry victims and they suddenly break out chanting slogans against the government, women beating their chests in anguish.

Bishop Akram Gill, of the Emmanuel Church also stands and makes an official complaint against the Sharif-led Punjab government. “The Shantinagar and Gojra incidents too happened during the Sharifs’ rule. How is it that when they are not in power, we tend to live more peacefully? The time has come that Christians must ask themselves:
Can we live in Pakistan any longer? We request the UNO to give us refuge because we cannot find any justice in this country.”

Though Akram Gill thanks the police for controlling the situation, Sohail Johnson from the Sharing Life Ministry Pakistan has to stop himself from swearing at the police authorities. “They are lying!” he shouts. “They have done nothing to save us. They stood on one side while our Bible was burnt. Their excuse was there were too many terrorist outfits present and that the police was weak.”

Meanwhile many are of the opinion that the whole scenario was a game plan by the nearby iron factory owners who they believe are patronised by a powerful ruling family member. The attackers, they say, were factory workers, and the agenda was to grab the land the Christians had their houses on. And when Saawan had already been arrested why was their need of violence?