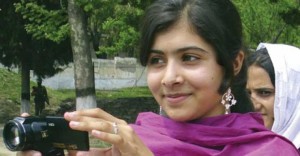 We are ready to judge Malala even before she has done something wrong and not willing to judge Taliban even after they have killed tens of thousands. Why?

To me, this ‘why’ is nonsensical. What else can one expect? When you have a society that takes at its founding the hatred and degradation of women and minorities, when that society inscribes that degradation in its most hallowed document, and continues to inscribe hatred in its laws and policies, it is eccentric to believe that its citizens will derive no ill messaging. It is painful to say this, Malala Yousufzai is not a victim of Taliban but a victim of our hypocrisy.  This is not our system malfunctioning. It is our system working as intended. 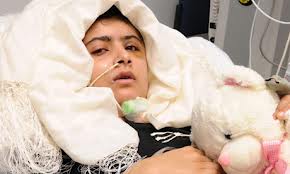 Malala Yousafzai was only 11 years old when she took on the Taliban by giving voice to her dreams. As the beastly turbaned fighters swept through her town Mingora in North West of Pakistan in 2009, everyone cowered in fear. But this petite child stood her ground to claim her right to learn. The tiny schoolgirl spoke out about her passion for education — she wanted to become a doctor, she said — and became a symbol of defiance against Taliban subjugation. Finally Taliban answered her courage with bullets,  with one of the bullets lodged close to her brain. Taliban spokesman, Ehsanullah Ehsan, confirmed by phone that Malala had been the target, calling her crusade for education rights an “obscenity.” Adding that if she survived, the militants would certainly try to kill her again. “Let this be a lesson.” Doctors had very little hope for Malala to live on. But Malala embodies a different spirit. She survived. There is no greater tribute to Malala’s courage than that the agents of darkness, that Taliban are, would see a schoolgirl’s death as desirable and justifiable because her wide-eyed optimism and courage had to be extinguished for darkness to prevail. 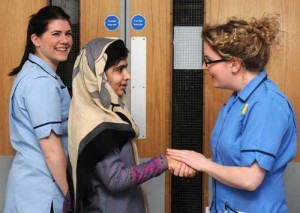 The marked indifference at the government level simply means that Pakistan has abandoned Malala to appease her tormentors, as it seeks to negotiate a settlement with the Taliban. That too is not a surpise, just a sign that hypocrisy pervades all echelons and most hearts in our society.  It’s also a pity that many of us are more preoccupied with her father than the real story. Hypocrisy readily accomodates the notions of conspiracy in order to escape reality.

Malala has my complete admiration so far. I don’t think people realise how incredibly phenomenal this girl is because she was brave enough to stand up for her rights in a situation in which most people would have either acquiesced or publicly acquiesced while quietly resisting, as I may have done. Malala resisted loudly and publicly and doing so whilst understanding the possible consequences took an immense strength of character regardless of her age. An extraordinary young woman, a child of our times, and an example of the power of education, and freedom of thought. I was moved to tears a number of times watching this young girl speak at the UN. I hope I can be as forgiving as she was in words towards the kind of misogyny, sexism, and ignorance that is perpetuated by her attackers. It reminded me of the moment when I heard Mandela speaking about his willingness to die for the right of people of all colours to live in harmony. For all fathers, brothers, husbands, and sons, the message is clear let our/your/my daughters, sisters, wives and mothers be Free. 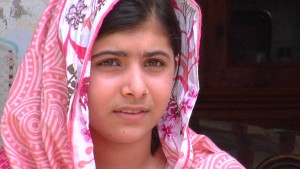 No matter if there was a team of writers drafting that speech for her, as some point out. So what? Who doesn’t have speech writers? For a 16 year old to stand and so eloquently deliver a speech in a foreign language to some of the most influential people of the world just beggars belief. The tenor of the verse like a flower should not be allowed to die. She is an inspiration to humanity worldwide. The Taliban are some of the most inhuman, misanthropic monsters I can think of. Courage like Malala’s is the antidote. However, courage alone does not suffice to describe the Lincolnesque delivery of her address – truly humbling.

It’s incredible that in trying to silence this girl and thankfully failing – the Taliban have managed to amplify her message in a way nothing else probably could. No wonder, as the girl is now beyond the assailants’ reach, their apologists are doing their utmost to discredit her for her perceived future sins. 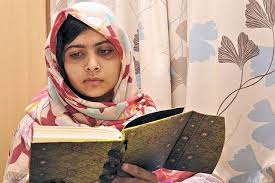 Free education for all is one of the most fundamental rights we have. Without it we condemn millions to poverty and ignorance.

To have gone through what she has and come out so much stronger, and at such a young age. She is an inspiration to young and old. She’s a good performer though.

So, in summary, Malala is quite a force of nature. For this sixteen year old from one of the most backward areas, for women in particular, in the world to be already a great public speaker in a language she is till learning to master is quite something. However, something else also bothered many: the fact that she was wearing the late Benazir Bhutto’s shawl, which was presumably given to her by the Bhutto family. No doubt, the Bhuttos were accused of enriching themselves, through their positions of office in Pakistan, and of course Benazir’s husband is renowned for his craft. However, I see absolutely nothing wrong with Malala’s wearing Benazir Bhutto’s shawl. In the final analysuis, now that she is gone, despite all her alleged and real human shortcomings Benazir Bhutto’s heritage does Pakistan proud. Like Malala, Benazir Bhutto was also maligned as an Indian agent, a Jewish agent, a western stooge, and even labelled a security risk. Though unlike Malala, Benazir was not lucky enough to survive the bullet from these beasts piecring her head. What these people forget is that Benazir is also seen as a symbol of courage and and icon for women in Pakistan, indeed the entire world. Notwithstanding her foibles, Benazir has left behind a powerful and inspriring legacy that she now cannot be dispossessed of, much as they try..

I just hope that Malala shows the same courage, vision, perseverance, eloquence, and persona as the remarkable woman whose shawl she chose to wear on the most important occasion of her young life.

And, I also hope that Malala keeps her integrity intact.

Go on Malala, be the light you are! Learn to show the world your best! Whereever you are, you remain our pride and our blessing.