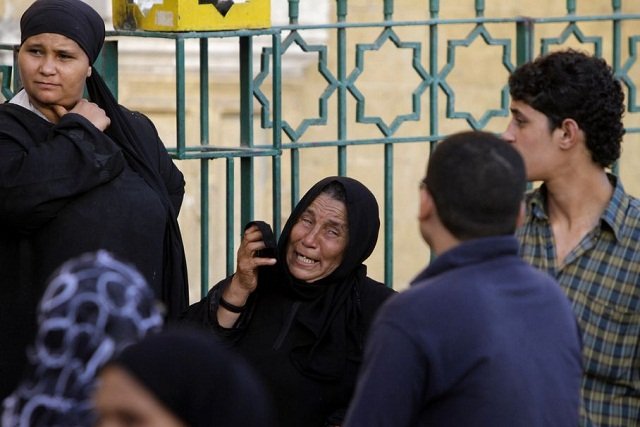 By now the world knows that in a savage incident in Egypt Sunday, thousands of Salafists lynched and murdered four Shias in Giza-district village of Zavia Abu Muslam, beating them and burning their houses down. Coptic Christians have also been subjected to numerous acts of barbarism and everyday discrimination. Here is Washington Time’s recent piece on this last incident.

In an interview with Agence French-Presse (AFP), attack participant Mohamed Ismail told the news agency, “We’re happy about what happened. It should have happened long ago.” Fellow villagers observing the interview agreed with Ismail’s remarks, who told reporters that he was a school teacher.

Briefly, several thousand Salafists, led by Salafist religious leaders, piloted their own “Jihad” against the hapless Shias, who were far outnumbered. A top Egyptian Shia leader, Hassan Shehata, was dragged out of his home into the street, beaten to a pulp and then stabbed to death by dozens of Salafists in front of thousands who cheered. Before the executions, Salafist preachers riled up the crowd, portraying the Shias as “heretics” who “spread immorality” in the village. Witnesses said police were present during the events, but did nothing to intervene.

Sad to see that this has now reached a country with strong Shia ties and Egypt, a home country of many scholars and place birth of civilizations, is threatening its brilliant history by targeting Egyptian Shia. The Fatimid dynasty, who ruled Egypt from AD 969 – 1171 and founded the city of Cairo, were exclusively Shia. It wasn’t until after the fall of the Fatimids that Egyptians began to convert to the Sunna, and the cultural legacy of Ahl al-Bait (descendants of the Prophet Mohammad, literally ‘people of the house’) remains strong even today. No further testimony needs to be made of the strength of Egyptians reverence for the Ahl al-Bait than the abundance of shrines and mosques dedicated to Hussain, Hassan, Zainab, Ali, and other Shia imams. In Egypt historically nobody liked or praised Muawiyah or his son Yazid.

Many historians are yet undecided about whether or not the general public adopted Shiism during the Fatimid rule, some claim it was only the ruling class that was Shia, but no one can deny the fact that much of what we call Egyptian customs can be traced back indeed to the Fatimid era. It is hard to miss the Fatimid heritage that is obvious on the streets of Cairo. Moreover, many of this era’s traditions are still practiced. Shia practices such as celebrating Al-Mawlud Al-Nabawy (the Prophet’s birthday), Ashura (commemoration of Al-Hussain’s death), and even using lanterns during Ramadan are still common among Egyptians today. Many of the rituals observed by Sunnis in Egypt, such as the visiting of the shrines of Al-Hussain, Zainab and others, are actually very similar to those of Shia practices.

However, all this began to change after Sadaat. Under the Saudi influence, the Mubarak regime was especially intolerant towards Shias, and they were regularly arrested and interrogated during his 30-year reign. For example, in 2009, more than 300 Shias were imprisoned by state security without official justification. Hence Shias actively participated in the struggle leading to the overthrow of Mubarak. During the last elections they supported Muslim Brotherhood in an expression of fraternity with Sunni Muslims.

But under the increasing influence of Salafist propaganda, Shias are becoming a small and marginalized minority in predominantly Sunni Egypt. They face daily persecution and victimization because of their beliefs. Although there are no official statistics about the number of Shias in Egypt, it has been estimated that they constitute roughly one per cent of the population: around one million people. Because of their relative obscurity, and the fact they tend to shy away from public or political activism, they are often overlooked in discussions about Egypt’s religious minorities. Shias say that they are ostracized and persecuted by Sunnis, and that they are afraid to publicly admit their confessional status since they believe it will only invite more prejudice.

Despite this, the number of Shias in Egypt seems to be growing, and there have been several cases of conversion to Shiism. This, of course, deeply chagrins the Salafists and their masters. Mahmoud Jabr, one such convert and the Secretary General of Egypt’s Hizb-ut-Tahreer (Liberation Party) – one of many grassroots political parties that have sprung up since the revolution – says he had his passport confiscated by the Mubarak regime because of his activism.

The tension in Syria between Sunni and Shia Muslims is also spilling over into the rest of the Arab world. Thus the fissures fostered by the Salafists, have been sharpened by the fighting in Syria, which has essentially deteriorated into a civil war. The condition is thus ripe for the Salafists to publicly spew hatred and incite fighting the Shia faith.

Change of government in Egypt was meant to bring much needed democracy and freedom to the country. Shia Muslims, as any other Egyptian, hoped the new government would keep its promises for freedom and democracy. It would become a place where Shia could peacefully practice their faith. However, now, more than before Shia Muslims are being arrested, suppressed, and advertised as Non-Muslim. As the result of anti- Shia movements in Egypt, many Shia-Muslims were arrested and detained for practicing their faith. Muhammad Asfour and Seyed Muhammd are among those arrested in an Ashura commemoration last year. The judge told Muhammad Asfour he had two options: to go to jail or to change his faith. In another incident, a Shia man was arrested for teaching Shia faith. His wife was divorced by court and forced to marry another man. The Egyptian government is violating many human rights articles by forcing Shias to change faith, interfering with Shias’ private lives, arresting and detaining them and also spreading hate messages in media and public.

Although the Egyptian Constitution, under Article 46, provides for freedom of belief and the practice of religious rites, Shia Muslims are a minority group that is not allowed to practice their faith in public or in private Islamic centers. Salafists and government backed clerics speared hate messages among the public to the point where most Egyptians now think Shia are not even Muslim even though they believe in the same God, Quran, practice Hadj, daily prayers and Ramadan fasting. Every day, more and more pictures, webinars and ads are posted on the internet in display of the flourishing anti-Shiism in Egypt.

Sheikh Muhmmad Hassa, a well-known Salafi cleric, states in his TV interview that Hussainyas, or Shia Islamic Centres are not welcome in Egypt. He insists Egypt should be cleansed from Shias. Salafist clerics clearly and openly forbid Shia practices in Egypt. A leading Salafist cleric recently pronounced that Shias are more dangerous than naked women. A recent study also shows that media in Egypt is playing a great role in creating a negative image of the Shias and could have an even more important role in correcting it. The study shows that the Egyptian population has certain negative view of the Shias which may have been cultivated, mainly through the media and, to a lower extent, through word of mouth and various publications as well. The problem lies in the core misunderstandings of the Egyptians about the Shias belief referring to the belief of a rare Shia sect, the Ghurabiyya, which may no longer exist, but their view is generalized to all Shias. They believe that Ali should have been the Prophet instead of Mohammad. The survey indicates that Egyptians’ general knowledge of the Shias’ belief is low and thus it is very easy to kick up a negative perception about the sect, notwithstanding the fact that Egyptians’ view Shia Iran’s President Ahmadinejad favourably and highly esteem him as one of the most unique leaders of the Islamic world. Similar views are held about Hassan Nasrullah, the Shia leader of Hezbullah in Lebanon based on his perceived victory in the war with Israel in July of 2007.

Muslim Brotherhood is sowing the seeds of its own destruction by succumbing to Salafist pressure and Saudi lure (backed by imperialist Western powers). It is about time that the Muslim Brotherhood realizes that it is playing with fire as it cannot own up Salafists agenda and beat them at it. The increasing Salafist influence in Egypt will be a death-warrant for the Muslim Brotherhood and its pan-Islamic ideology. Instead the Brotherhood should practice allegiance to the tenets of modern governance where no government, religion or organization can take away any other groups’ rights. The Egyptian government must protect and defend Coptic Christians’, Shia Muslims’, and all other minorities’ rights. The foundation of the new government should not be based on discrimination and hate, but on freedom and respect. Silence by the Morsi government is clear indication of complicity.

Opponents of President Mohammed Morsi said he was in part to blame for implicitly supporting his hard-line allies as they stir up incitement against Shiites in response to Syria’s civil war. A week earlier, Morsi appeared on stage with hard-line clerics denouncing Shiites as “filthy.” Critics warn that militant Islamists are acting with dangerous impunity.