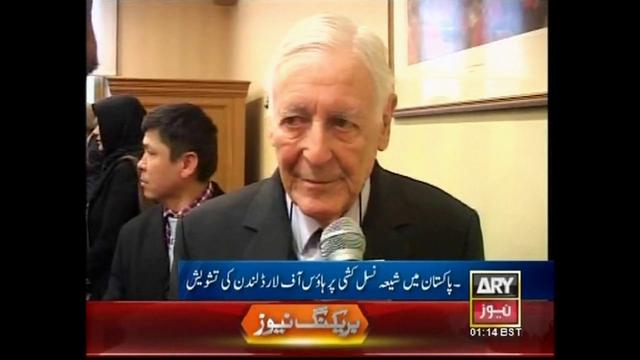 LONDON: All Parliamentary Human Rights Group in the British Parliament has submitted to the United Nations what is believed by many to be the largest application the Special Rapporteurs may have dealt with about the targeted assassinations of Shia Muslims in Pakistan.

Lord Eric Avebury, vice chair of the group, has called on the United Nations to take notice of what he has called “the genocide of Shias in Pakistan”.

“This is not a case of one or two individuals being killed but a systematic countrywide pogrom against the whole of the Shia population of Pakistan which has so far taken the lives of over 21,000 people by banned organisations, which nevertheless operate with almost total impunity. As far as we can see, the government of Pakistan has proved unable to protect the hundreds of victims of these merciless assassins.”

He said that banned organisations Lashkar-e-Jhangvi (LeJ) and Sipah-e-Sahaba Pakistan (SSP, currently operating as Ahle Sunnat Wal Jamaat Deobandi ASWJ) are openly involved in killing Shias and others financed by powerful foreign countries. Human rights lawyer Rubab Mehdi Rizvi, who coordinated the preparation of the report, told The News that the authorities in Pakistan are doing little to apprehend the perpetrators of these massacres or to close down the terrorist organisations which are planning and carrying them out as well as hundreds of targeted assassinations. She confirmed that various organisations representing the Shia communities of Pakistan presented detailed evidence of the massacres and targeted assassinations of their members, including Hazara United Movement, Hazara Forum of Great Britain, Al Khoei Foundation and Majlise Ulema Shia Europe. She added that a request has been made for an investigation of the preliminary facts with a view to taking appropriate measures by the UN High Commissioner for Human Rights.

Previously, during the debate in the House of Lords on the killing of Shias and others in Pakistan, Lord Avebury said that the atrocities and the targeted assassinations of Shia intellectuals are part of a concerted attempt to wipe out the entire Shia population of Pakistan.

“That is genocide, as defined in Article 2 of the UN Convention on the Prevention and Punishment of the Crime of Genocide. Our first task should be to deepen our understanding so that we can help Pakistani society and the Pakistani Government to understand and tackle this problem. Obviously, we cannot say anything to a sovereign country about how it should conduct its affairs.”

Lord Alton of Liverpool blamed the combination of inadequate religious freedom protections and an entrenched climate of impunity that has strengthened the position of the more violent groups in Pakistani society. He pointed out that the perpetrators are rarely brought to justice, which means that easy targets have all been badly affected.

Lord Soley pointed out a case for looking to see whether the UK can help by using the established leaders of Islam within the UK who recognise that there is a struggle for the heart and soul of Islam.

Lord Qurban Hussain said that Pakistan was a moderate, liberal and tolerant Islamic country. “Very few cases of intolerance were reported during the best part of the first 35 years of its life,” he said.

Lord Ahmed stressed even though under Pakistan’s Constitution there is complete equality for every citizen,

“we know that in this part of the world religious extremists, whether the BJP in India or the Wahhabi Deobandi Islamists in Pakistan, use religion for political power. Even Sunni tribes have been driven out of the villages of Beshara and Bohra. There is lawlessness in Balochistan, whether by nationalists or the al-Qaeda-linked and banned organisation Lashkar-e Jhangvi, and there are attacks on the Shia Hazara community”.