A session was held in British House of Commons on 25th February 2013 where Hazara and Shia Genocide was discussed with Lord Eric Avebury. The session was called by Parliamentary Committee of Human Rights which is chaired by Lord Eric Averbury himself.  The session lasted for nearly 2 hours and was attended by members and leaders of Shia community, Hazara Shia community, Sunni community, legal community and representatives from some political parties, journalists and human rights activists. 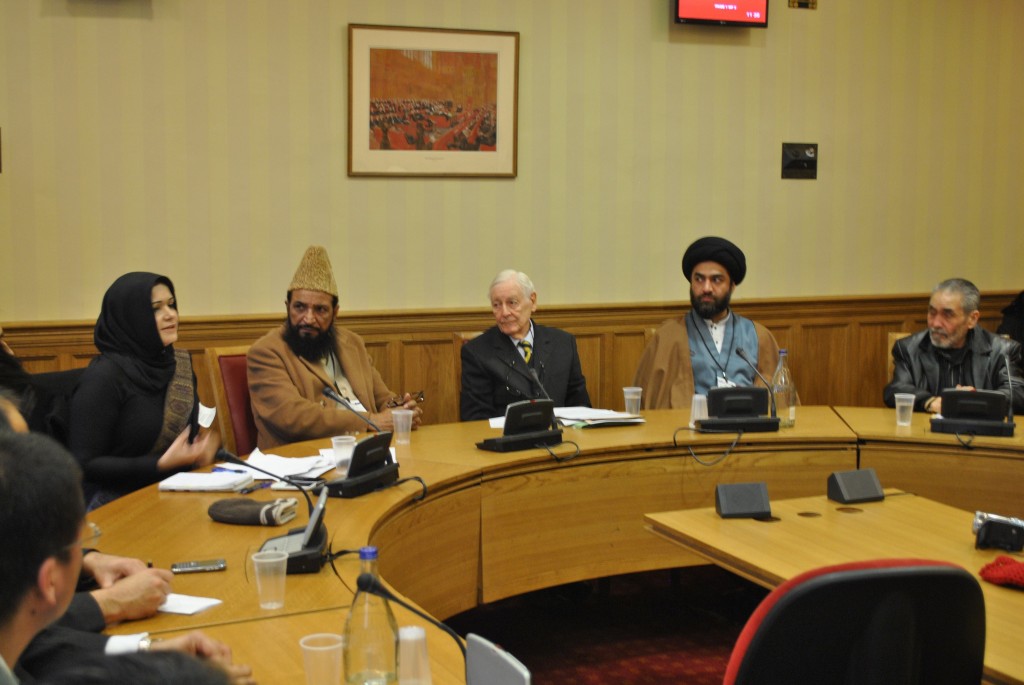 Lord Eric started the session with a brief talk on Hazara and Shia Genocide which is now available at Liberal Democract blog LibDemVoice. He recognized that the Shia community in Pakistan (including but not limited to the Hazara Shias) face a genocide and have been target of endless violence. He also criticised the role of some political parties in Pakistan who were striking an electoral pact with the militant outfits to contest the forthcoming general election. He warned that such electoral alliances will almost certainly have MPs in the next Parliament belonging to those parties who spread hatred and finance to meet their goals. Lord Avebury expressed concern that extremist mindset has infected the mainstream Barelvi sect and the hate mongers are destroying the national fabric of the country.

I am shamed of what is being done in Pakistan in the name of Ahle sunnat wal Jammat. I would like to categorically put this on record that these terrorists have got nothing to do with Ahle Sunnat wal Jammat. There is no Shia Sunni divide at a common man’s level in Pakistan or there would be civil war. Shias have been an asset for Pakistan. Many Pakistanis still don’t realize that the man they worship for creating their nation, Mohammad Ali Jinnah, was a Shia himself. Jinnah envisaged a Pakistan in which all citizens irrespective of religious identity, colour, caste, gender and social status would enjoy equal rights.The same people who called Quaid e Azam Kafir e Azam are now trying to break Pakistan. None speaks about killing of the Shia, all they say is its proxy war. No, its not. Saudi Arabia is exporting Wahhabism and funding terrorism.

just as the Lord has acknowledged the is Shia Genocide in Pakistan, we would urge all Pakistani community and British Government to ask Pakistani Government to acknowledge that the atrocities against Shia Muslims are tantamount to Genocide. If Hazaras were Salafis they would not be targeted. They are killed only because they are Shia. We request the British Parliamentarians to pressurise Pakistan to stop this Genocide. These killers are taught Shia are infidels at the madressahs funded by Saudi Arabia and when they grow up, they blow up themselves to kill Shia. None of them is ever prosecuted, the Judiciary is completely baised. They take suo moto notices on as many things as you can imagine but are all silent on this Genocide. We are also concerned about the role of media – either they are scared or they are dishonest. Are they being threatened by these terrorists or are they being paid by these Shia killers?

British Parliamentarians must ask Pakistan to show evidence that they are not involved in Shia Genocide. I believe the Pakistan military is fooling the West to gain more and more funds but actually they are doing nothing to stop terrorism in or outside Pakistan. I am sure they know the sources of Shia Genocide but they consider these killers as assets. The military, the courts, the judiciary and media, they are all playing a partial role.

condemnation is not enough, we need to take further steps. Terrorists released should not be able to say a word outside prison. Any Organization should be aware that if they engage in hate speech they will be made an example. Today it is Hazaras and Shias, tomorrow it can be anyone. Pakistan needs to take constructive and solid steps to confront terrorism.

It seems although killings have been going on for years with every attack they are going more and more brutal.Although there are many problems in Pakistan the state has capacity and should bring killers to justice. One key issue is the politicization of institutions both military and civil.The security forces aren’t geared to protecting society. Also, the structural issues in Pakistan need to be resolved and the killings of Shia can not be seen in isolation. The dignity, courage, patience and non violence which the Shia community has showed is something to be proud of as human beings.

Haji Marzoaq, demanded a military action against LeJ and said:

Representative from Pakistan High Commission said that the country was at war and no other country has suffered as many losses as Pakistan in the war against terror.These heinous crimes have an external and an internal context. Internally this has to be seen in the overall situation of prevailing security situation in Pakistan where 40, 000 innocent citizens have lost their lives in the fight against terrorism. In given situation ,all anti Pakistan forces have joined hands to tarnish Pakistan. Lej and TTP both have specific agendas but have joined hands. They are persecuting Hazaras because hazaras are undoubtedly a patriotic and peace loving community of Pakistan. By targeting this group they want to discourage the moderate forces in Pakistan and promote their rigid agendas. Also what is pertinent to note is the fact that these vile acts coincide in timing with whenever there is an important social public project in Pakistan. These acts gain momentum whenever a project promising economic and social dividends is under way. The Government is determined. It has taken steps in imposing Governor Rule and Froniter core has been given more powers.

A tribal leader of the Hazara community said:

Hazaras are killed because of their Shia faith. In Afghanistan  they have Sunni Hazaras but they were never killed. It is our Shia faith which has always got us killed – whether in Afghanistan or Pakistan. It is also not sectarian or two way war because we are always collecting the bodies and they are dropping the bodies. We are a tiny minority but they should not that the 40 million Shia of Pakistan stand with us, we are one family, and we did protests together all over Pakistan. We will not pick up guns but imagine a Pakistan when we the Shia pick up guns too.

The killing of Shia can not be seen as an isolated act. We need to ask why Hazaras? The answer is they are Shia, they are easily recognizable and they are peaceful.

She expressed alarm at escalation in violence against Shias in the recent months including bomb blasts in market places and buses carrying people being stopped and passengers gunned down after identification. She saluted the fortitude and dignity of young Shias and appreciated the peaceful nature of the protest. She demanded stringent legislation to prohibit hate speech and levelling charges of apostasy. Mrs Rizvi also expressed disappointment that the charges on Malik Ishaq are still unknown although at least two FIRs have been registered against him. She noted that Malik Ishaq has been released before for lack of proof and for this reason she demanded closing the loopholes in the law of evidence to ensure that terrorists are not able to use these loopholes to secure their release.

We ask you to help us submit a case against the Pakistani state, not government in UN, International courts of Justice and other forums. We firmly believe that Pakistani state institutions specially security agencies are indirectly involved in Shia Genocide. It is in their capacity to control it but it does not suit their interests. Shia should no longer remain collateral damange of the state’s policy of strategic depth.

A 10 page report on Shia Genocide in Pakistan has been prepared which can be downloaded here. This report can also be read below.

If you are a UK Resident, please use TheyWorkForYou website to find your MP and send him an email with this report attached and a message requesting him to join the Parliamentary Group being formed by Lord Eric Averbuy on ‘Hazara and Pakistani Shia’.

If you are not a UK Resident, you can still send messages to various British Parliamentarians on Twitter or email them. Their contact details are easily available only. You should also send this report to politicians, parliamentarians and human rights groups in whichever country you live and request them to raise their voice on the issue on platforms available to them. 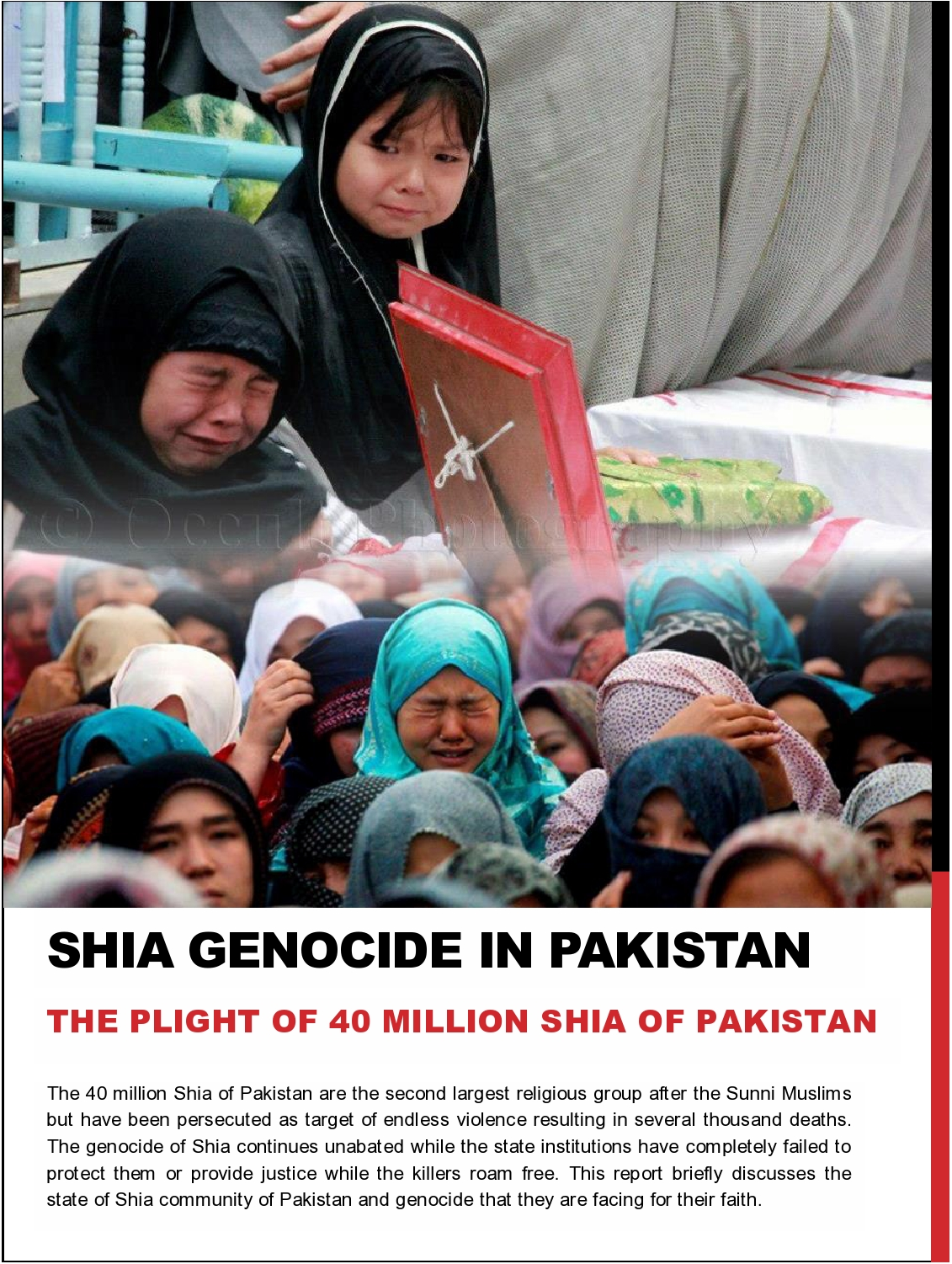 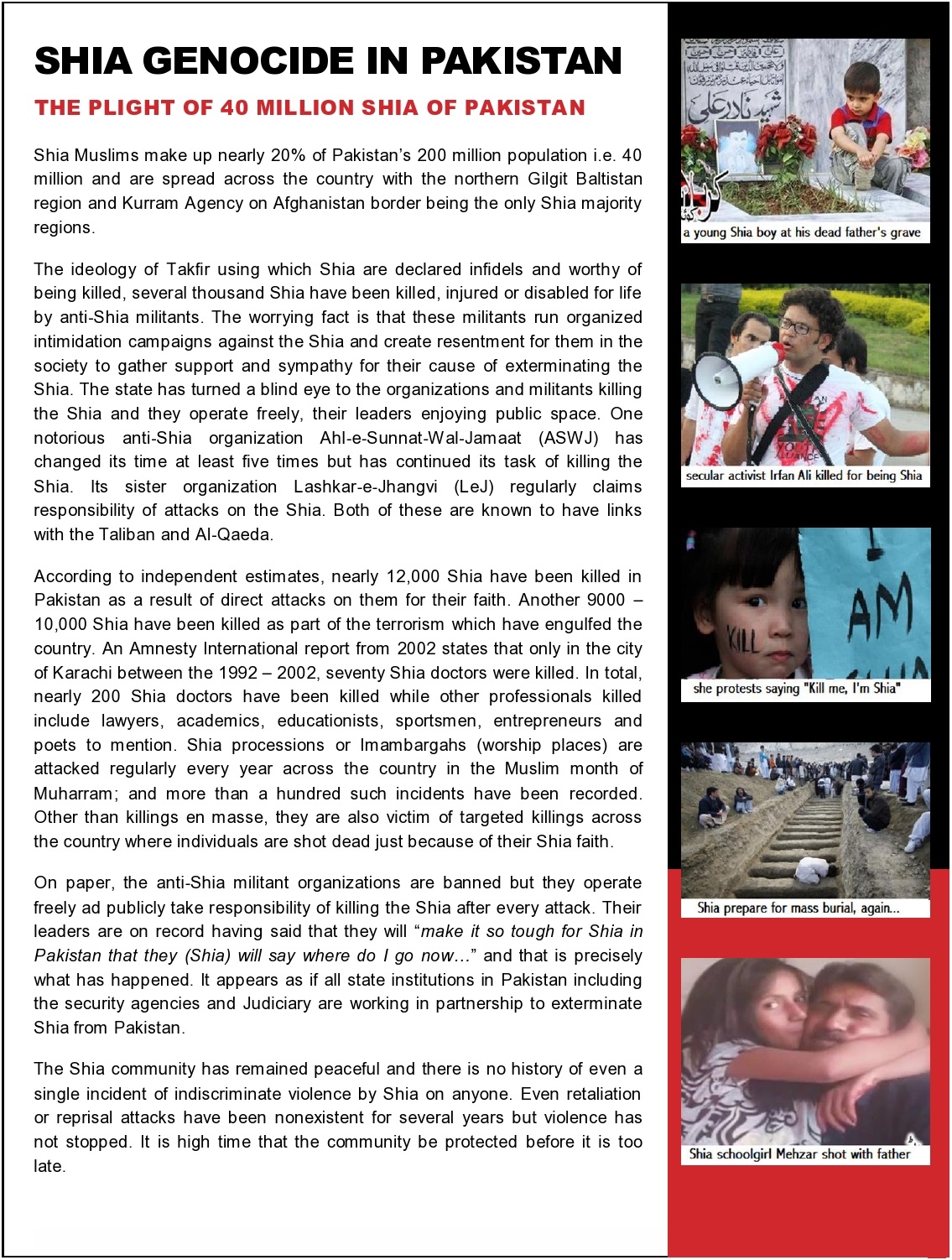 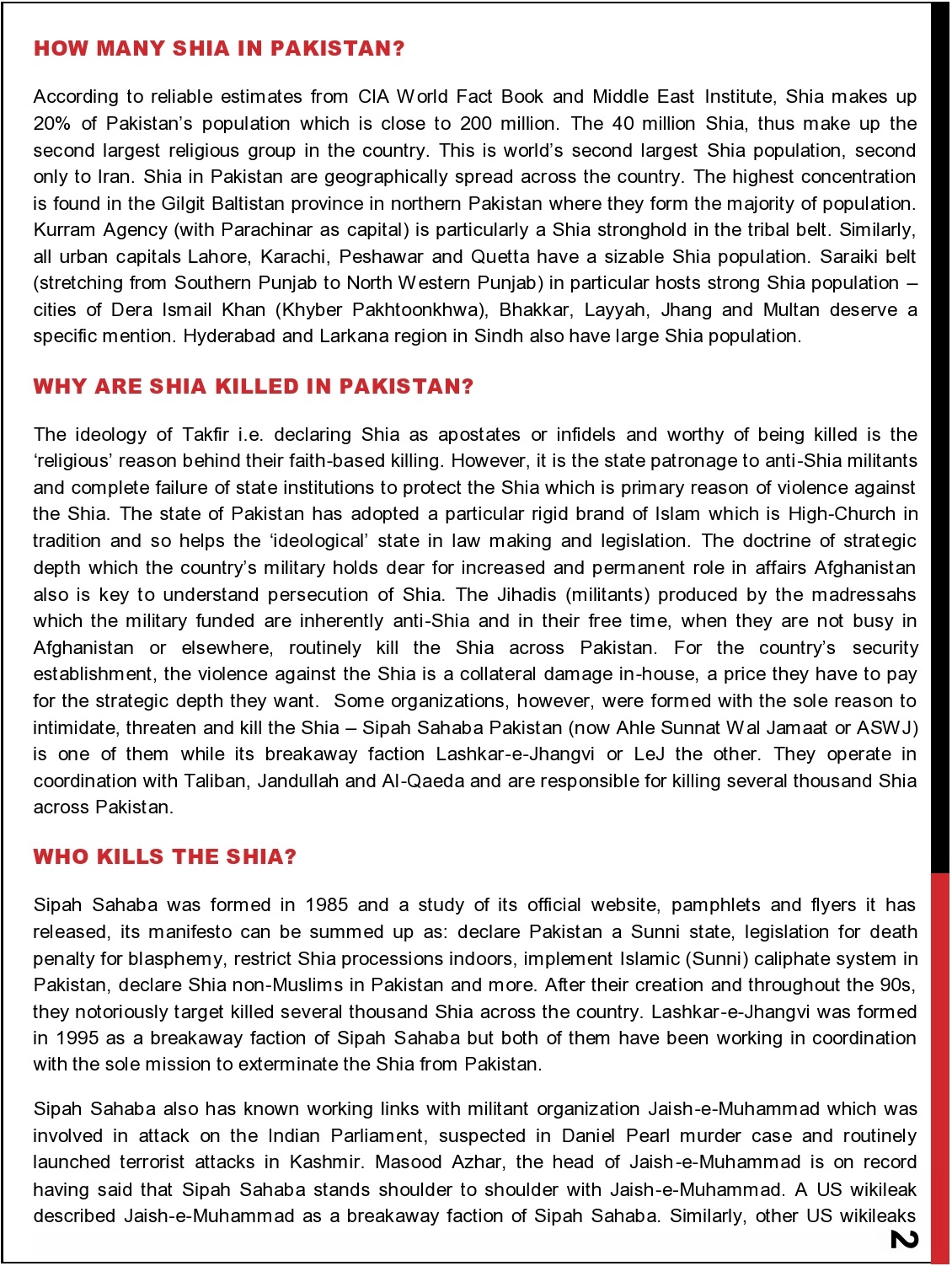 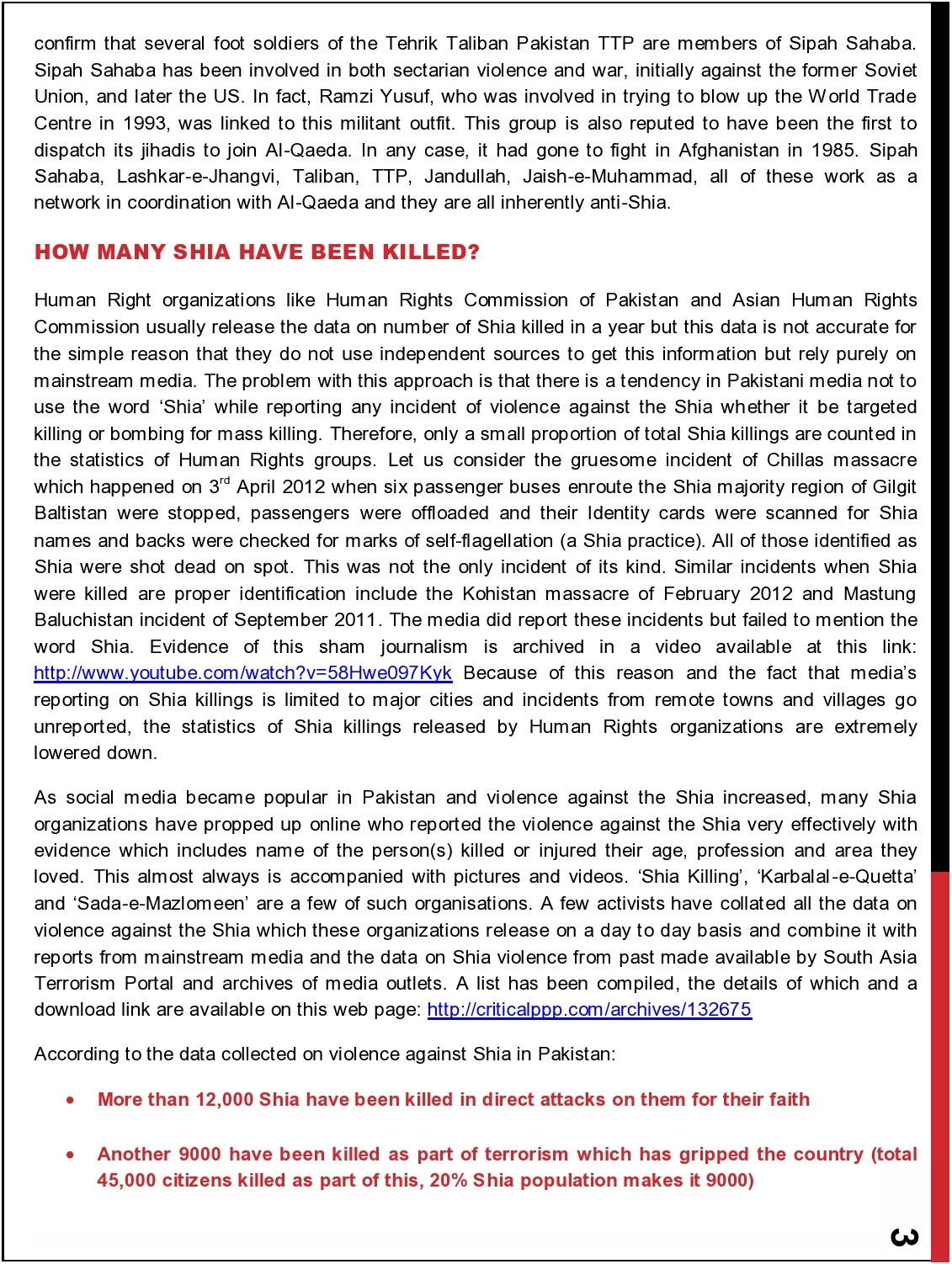 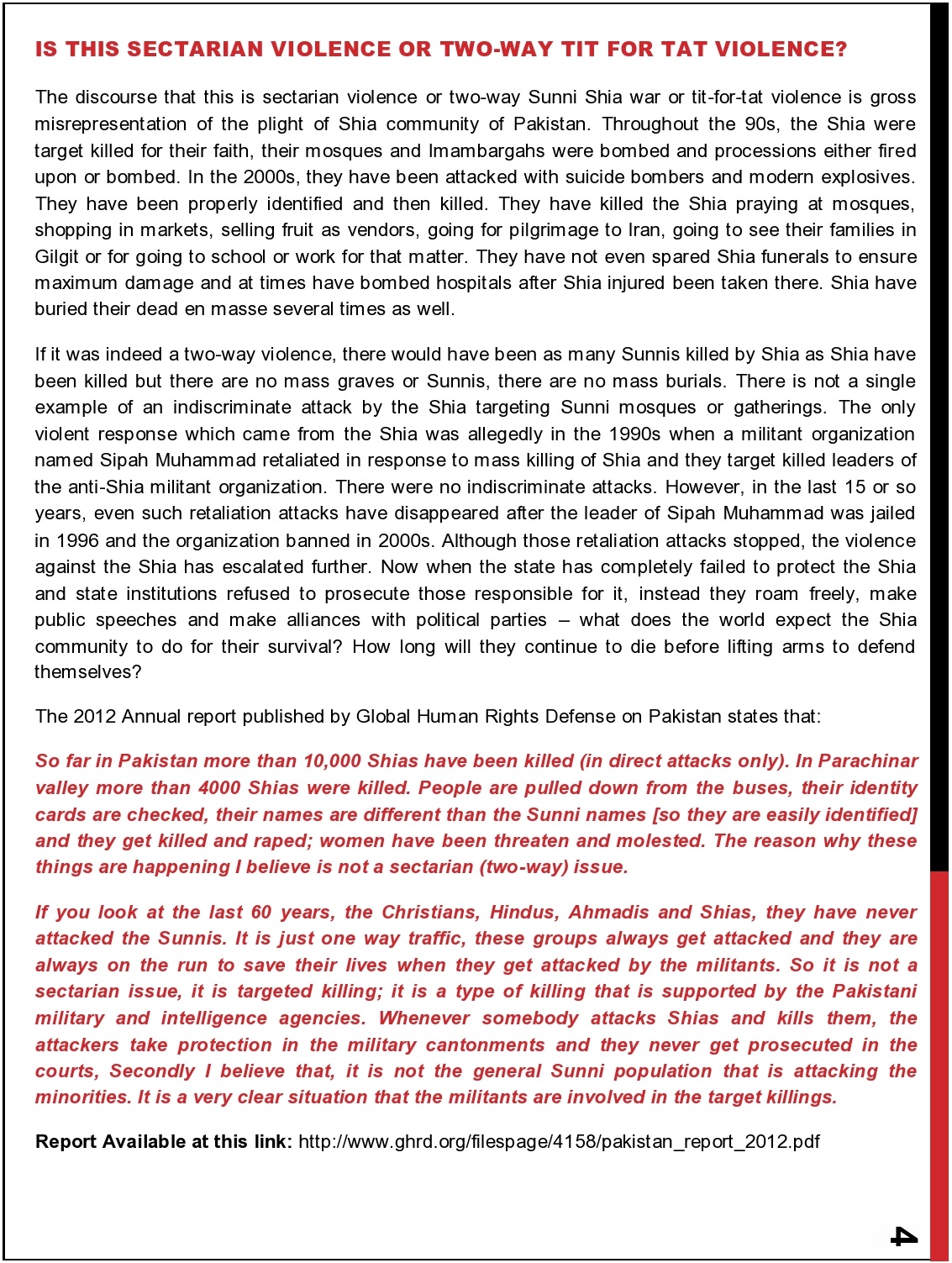 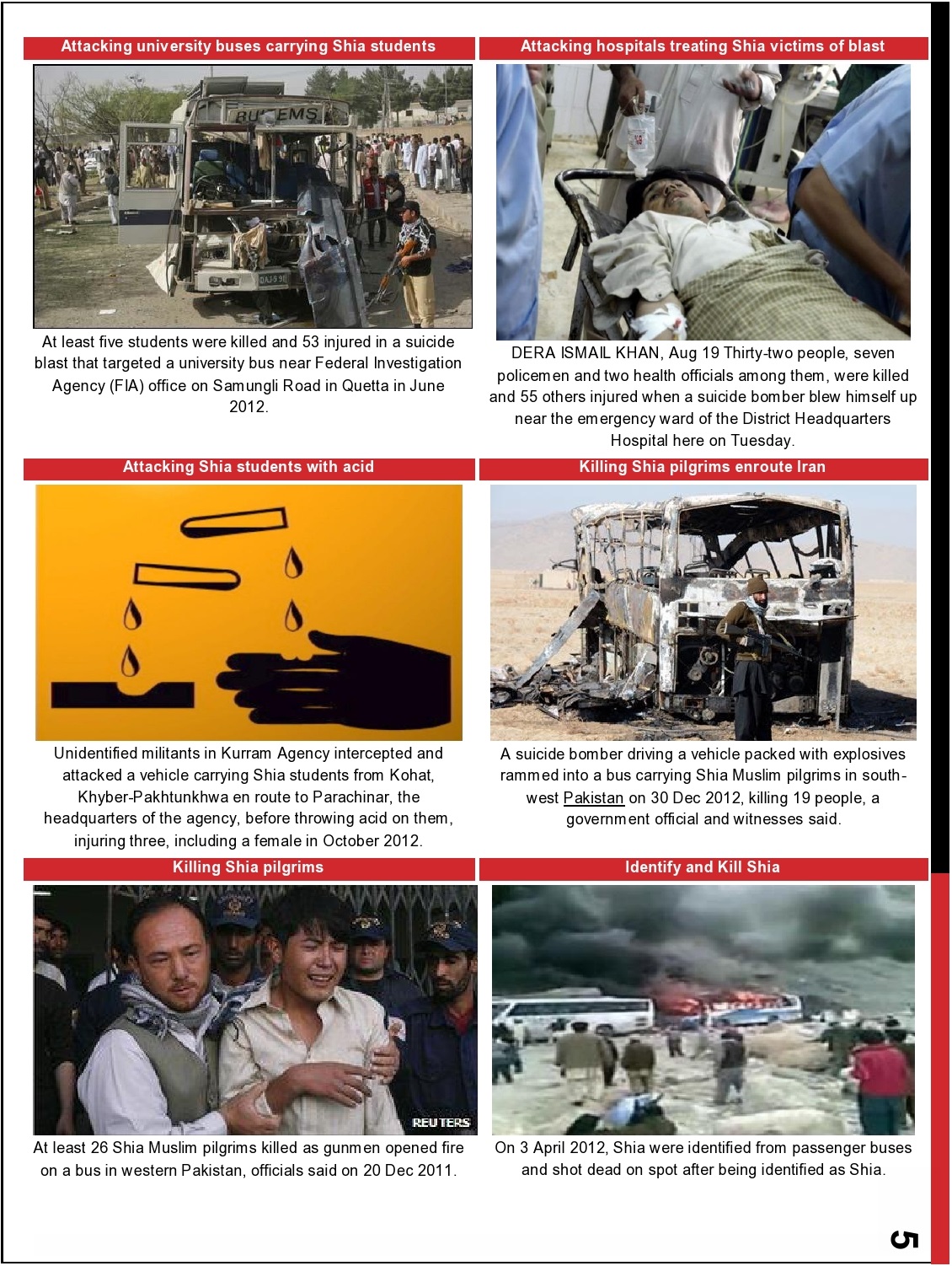 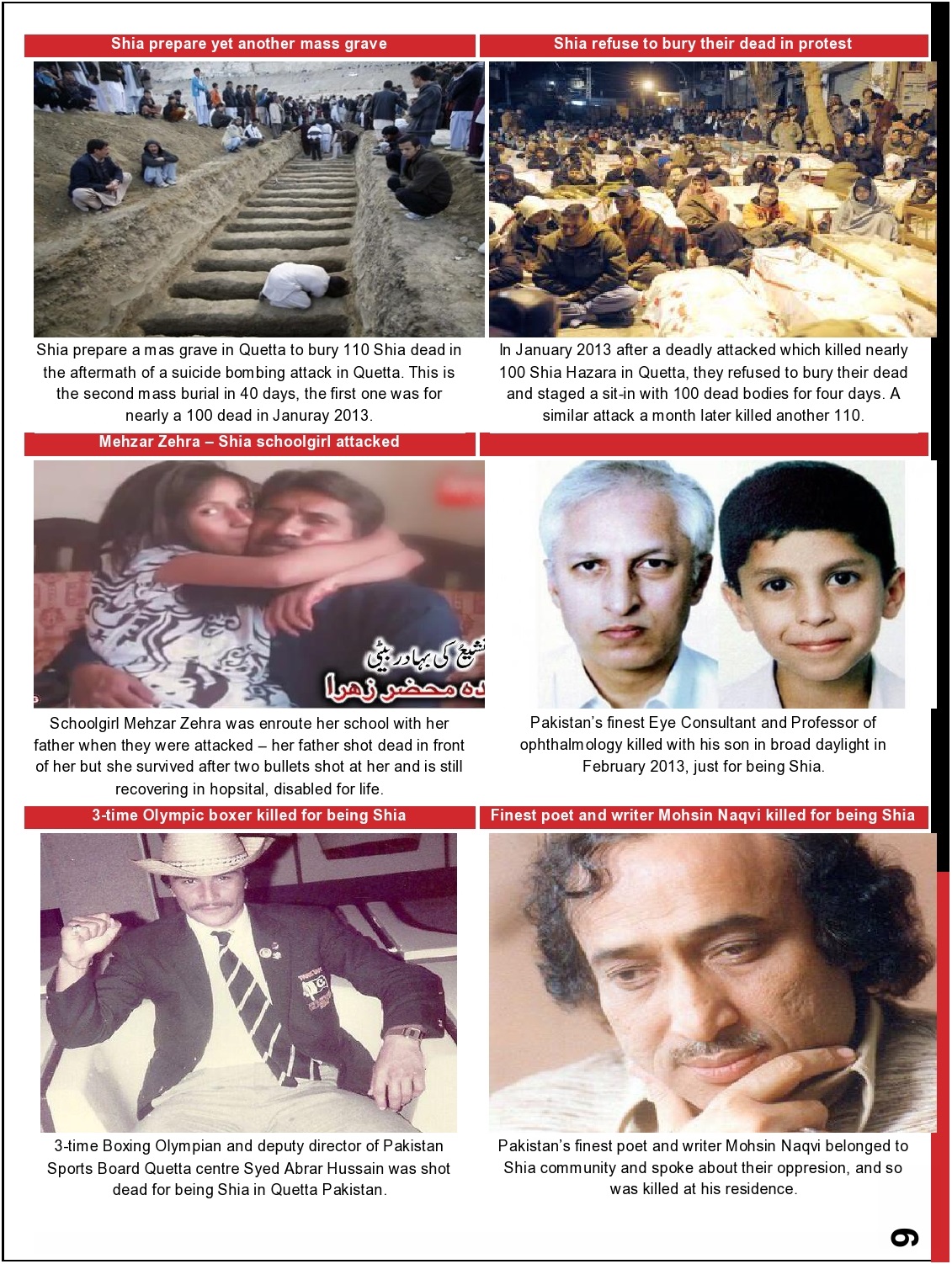 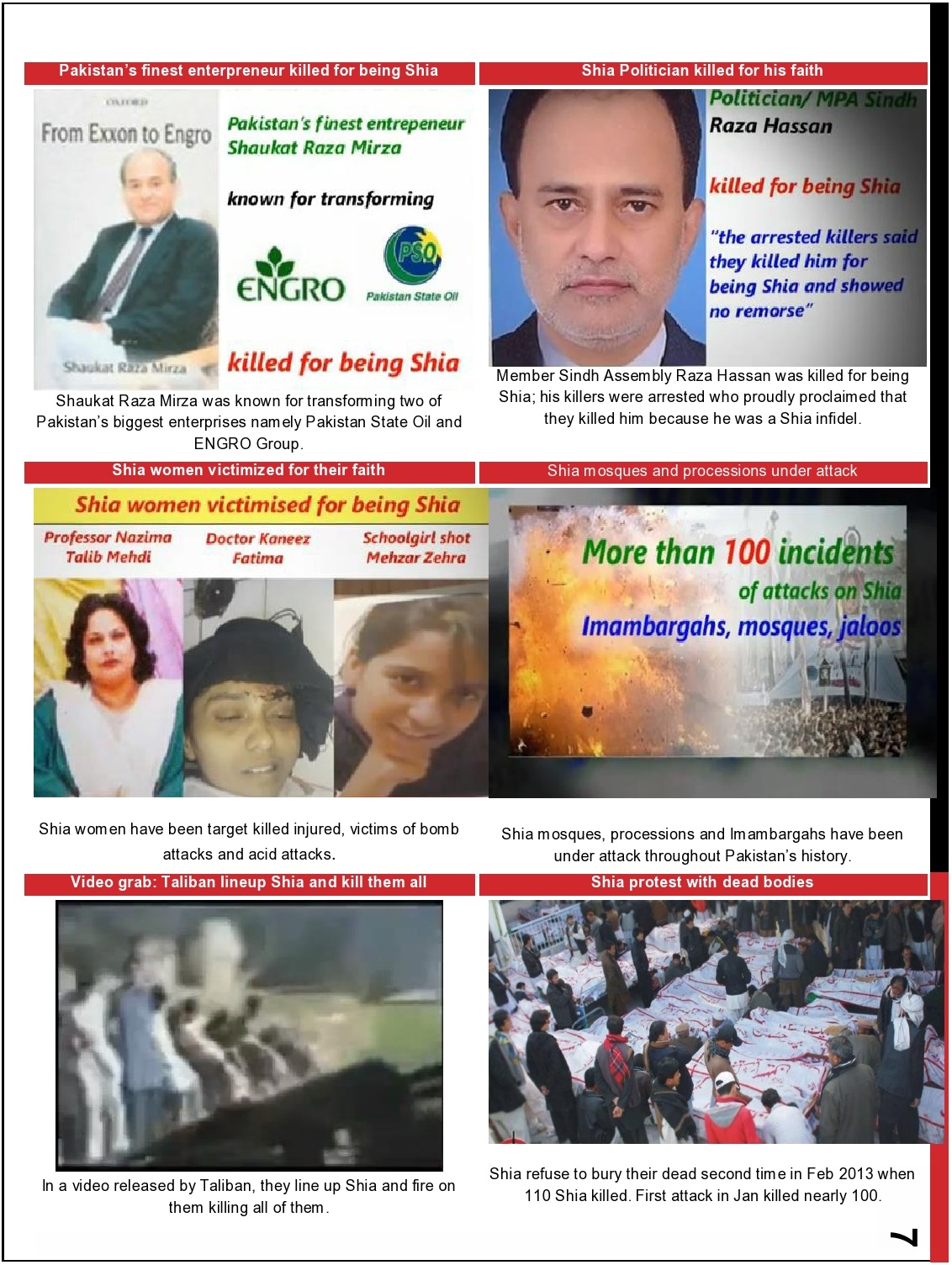 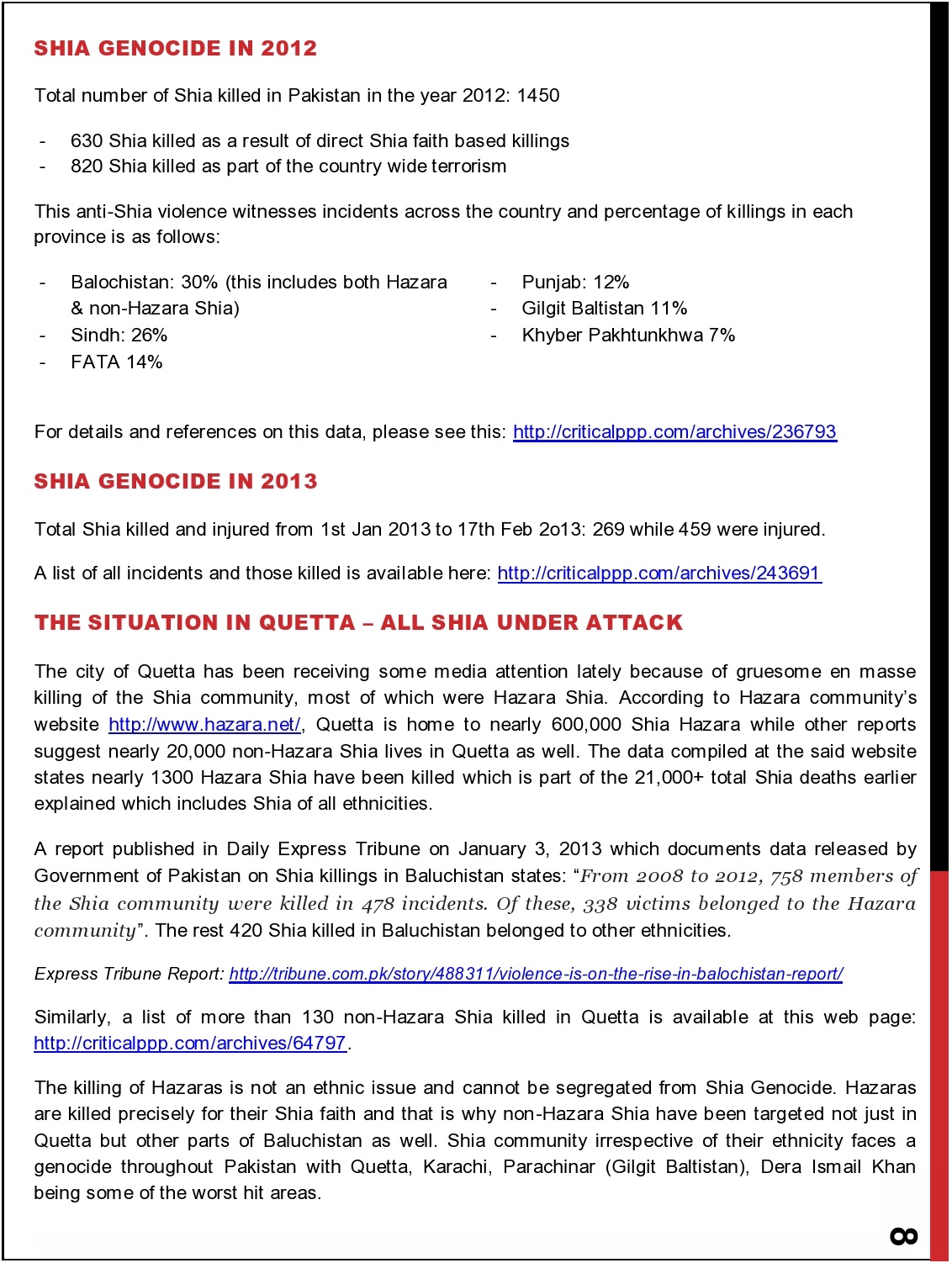 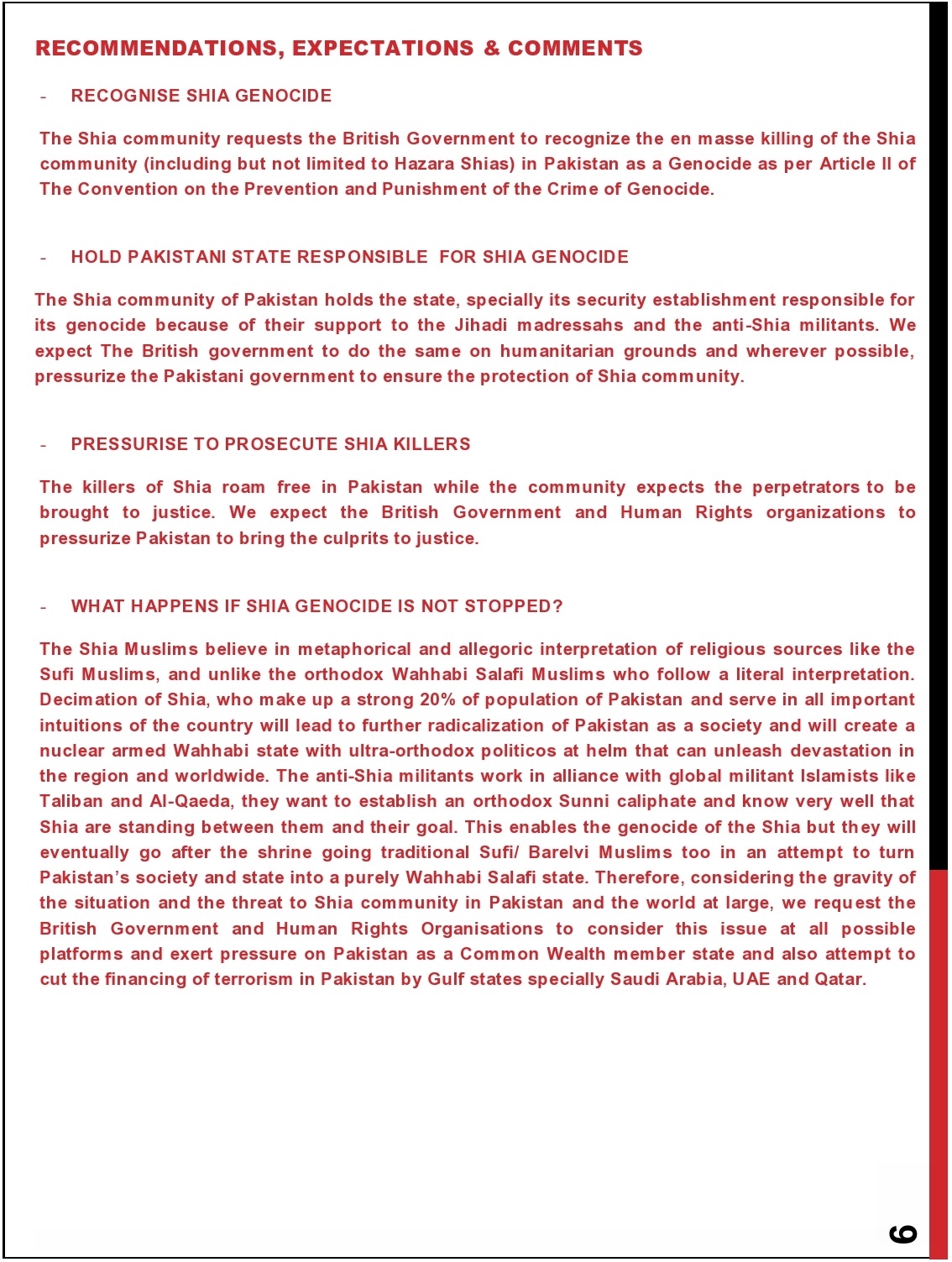 ARY TV News report on the House of Lords meeting on #ShiaGenocide: