The Right Honourable The Lord Avebury 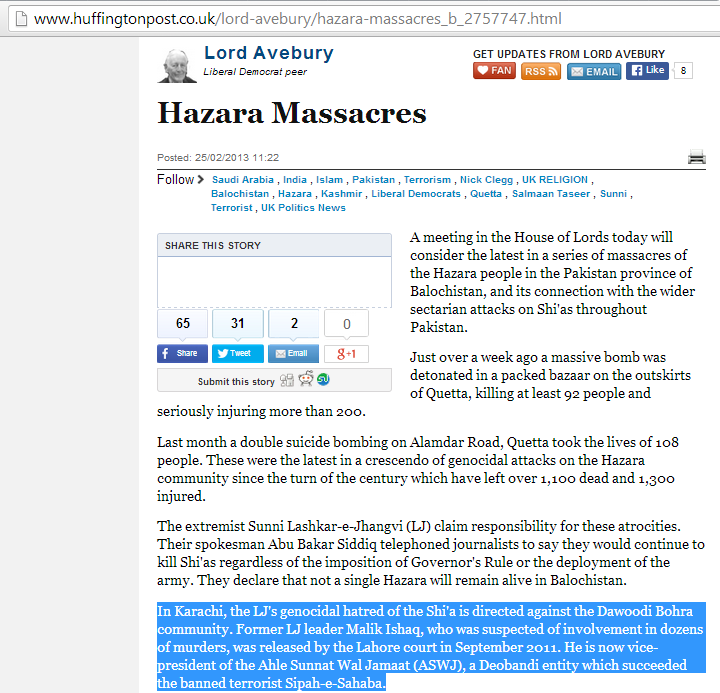 A meeting in the House of Lords today (25 February 2013) will consider the latest in a series of massacres of the Hazara people in the Pakistan province of Balochistan, and its connection with the wider sectarian attacks on Shi’as throughout Pakistan.

Brief report of the meeting
In the meeting in the House of Lords on Shia genocide including Shia Hazara massacres in Pakistan, two points stood out. One was Lord Avebury’s assertion that the Shia and Hazara killings should be considered as genocide and the second points related to references made by many speakers on the need to convince Saudi Arabia to crack down on funding going into hands of extremists in Pakistan

The UK Parliament’s Human Rights Group acknowledged that the Shia face a genocide in Pakistan. A parliamentary group is being formed to take up Shia Genocide and lobby in the UN and other international forums.

British Association of Sunni Muslims asked the UK Parliament to exert pressure on Saudi Arabia to stop funding Takfiri terrorist outfits in Pakistan. Representative of Dr. Tahir ul Qadri’s Minhaj-Ul-Quran UK requested British Parliamentarians to exert pressure on Pakistan to stop Shia Genocide and make use of Dr Qadri’s anti terrorism fatwa against suicide bombers and terrorits. Chairman of the UK Central Association of Sunni Muslims said there is no proxy war by any country in Pakistan, only Saudi Arabia is funding terrorism and exporting radical Wahhabism to Pakistan infiltrating traditional (Deobandi and other Sunni) Muslims.

The British parliamentary group, once set up, will also visit Pakistan to monitor situation on Shia genocide, and report findings to the UK Parliament, UN and other international forums. (Source: Myra Macdonald, Ale Natiq)

Just over a week ago a massive bomb was detonated in a packed bazaar on the outskirts of Quetta, killing at least 92 people and seriously injuring more than 200.

Last month a double suicide bombing on Alamdar Road, Quetta took the lives of 108 people. These were the latest in a crescendo of genocidal attacks on the Hazara community since the turn of the century which have left over 1,100 dead and 1,300 injured.

The extremist Sunni Lashkar-e-Jhangvi (LJ) claim responsibility for these atrocities. Their spokesman Abu Bakar Siddiq telephoned journalists to say they would continue to kill Shi’as regardless of the imposition of Governor’s Rule or the deployment of the army. They declare that not a single Hazara will remain alive in Balochistan.

In Karachi, the LJ’s genocidal hatred of the Shi’a is directed against the Dawoodi Bohra community. Former LJ leader Malik Ishaq, who was suspected of involvement in dozens of murders, was released by the Lahore court in September 2011. He is now vice-president of the Ahle Sunnat Wal Jamaat (ASWJ), a Deobandi entity which succeeded the banned terrorist Sipah-e-Sahaba.

The ASWJ has an electoral pact with Nawaz Sharif’s Pakistan Muslim League to contest the forthcoming general election, so they will almost certainly have MPs in the next Parliament.

Last Friday, in a belated response to demands by the governor of Balochistan for the central government to act against the terrorists, the police finally arrested Malik Ishaq on unspecified charges.

UN Secretary-General Ban Ki-moon called for swift and determined action against the LJ, but taking one assassin off the street is not going to halt their campaign to exterminate the kufr (infidels) and turn Pakistan into an ethnically and religiously pure Islamic Caliphate.

In all the years since violent racist organizations like the LJ have flourished, not one of their members has been convicted in a court of law. Nor has the Parliament legislated to make racial or religious hate speech a criminal offence.

Worse, their ideology has infected the mainstream Barelvi sect, as evidenced by the killing of Punjab governor Salmaan Taseer and the widespread sympathy expressed for his assassin by their members.

Taseer had merely called for clemency for a poor mother of five, sentenced to death on baseless charges of blasphemy. The growth of intolerance is exemplified not only by the blasphemy law, used to persecute religious minorities, but also by the targeted killing of its critics.

To produce the terrorists who kill anybody that disagrees with them, as well as Shi’as and other minorities, there has to be an aberrant interpretation of Islam. In Pakistan, and to a lesser extent in other countries of south, central and southeast Asia this is being propagated in madrassas that receive organizational and financial funding from Saudi Arabia. The cries of agony of the Hazaras, like the canary in the mine, should alert us to the even wider dangers they signal. 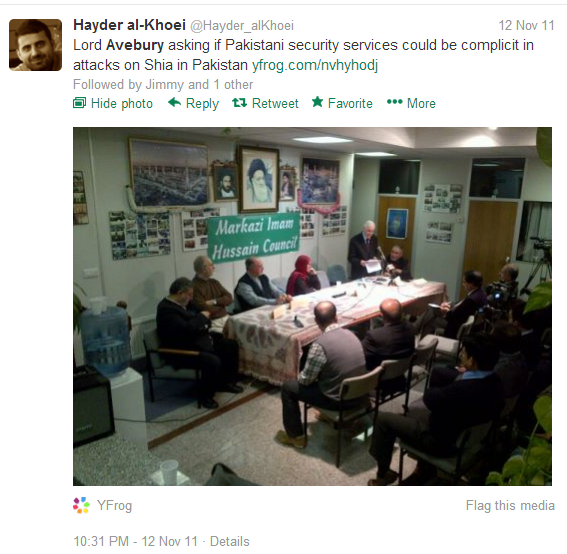 A conference on Shia Hazara killings held in London with Lord Eric Avebury, Dr Ali Alawi plus many more human right activists and politicians on 12/11/2011. Lord Avebury questioned the dubious role of Pakistan army and intelligence agencies who look the other way while Deobandi-Salafist militants and madrassah Jihadists kill Shias.