Home  »  Original Articles   »   Qatar, Stoking up the Fires in Syrian Inferno – by A Z 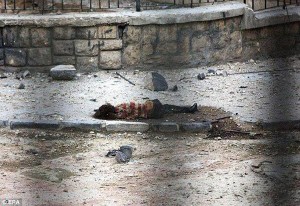 In Syria Bashar al-Assad obstinately clings on to power as the number of dead continues to rise and the atrocities by the rebels and the government multiply. In the midst of all this it is startling to note how the miniscule Gulf state of Qatar has seized control of the rebellion in Syria by pouring in hundreds of millions of dollars to arm the insurgents. Qatar is the only country which has allowed rebels to open a Syrian embassy in the emirate. It is the only such embassy in the world. Qatar also lobbied vociferously to convince Arab League to hand over Syria’s representation in the League to the opposition. In order for Qatar’s dabbling into Syria’s politics to bear some results, first Syria has to survive as a viable country. Something that now appears increasingly doubtful as the fabric of Syria’s society has been torn apart and the rebellion has battered and violently polarized its population. In the meanwhile Qatar continues to control various points of influence in the country through Islamists and gangs loyal to it. Ever since its resolute lurch into the rebellion in Syria, Qatar has been the single biggest backer of the Syrian rebels.

Qatar’s role in Syria looks disproportionate for a tiny country that lacks muscle and diplomatic experience and does not have the standing of a heavyweight Arab country like Saudi Arabia.  Qatar is estimated to have contributed as much as $3 billion to the rebellion in Syria. However, two years down the road, Qatar finds itself mired in a bloody and complex crisis with a diminishing ability to engineer its outcome. There is a widely held perception among the Syrian population that Qatar is arming the rebel networks loyal to it in order to be able to control the post-Assad Syria. Many Arabs see Qatar as a tiny parvenu country overstretching itself.

To some extent Qatar cover ups the western countries reluctance to make their involvement in Syria known. That western leaders and strategists see no paradox in totalitarian monarchies like those of Qatar and Saudi Arabia rooting for democracy elsewhere is another matter. However, its involvement in Syria is also in tandem with Qatar’ foreign policy drift that also saw it backing the rebellions in North Africa and forging close links with the Islamists that emerged victorious. Qatar supports the Muslim Brotherhood in Egypt and the Islamist al-Nahda party in Tunisia, which have both won the first elections in their countries and promise to be useful friends for Qatar. Some analysts suspect Qatar’s emir Sheikh Hamad bin Khalifa al-Thani of positioning himself as the leader of the Arab world in an Islamist reincarnation of Gamal Abdel Nasser. His drive backed by massive riches of the emirate is fast establishing Qatar as a major regional player despite its insignificant size. But the military impasse in Syria also highlights Qatar’s limitations as a political power and the recklessness of its regional ambitions. In its endeavours to unite the Syrian opposition under its brainchild Syrian National Coalition and by putting the disjointed rebel brigades under one central command, Qatar has ended up deepening the divisions among the opposition and further fragmenting a hapless country.

Qatar’s role in Syria also reeks of the al-Thanis’ unbridled opportunism. Not long ago Assad and his wife Asma were regularly feted in Doha as close personal friends of Sheikh and his wife Sheikha Moza. Qatari institutions were big investors in Syria from power stations to hotels. At that time Syria was a strong component of an alliance with Iran and Hezbollah that seemed in dominance in the region. When the insurgency erupted in Syria in March 2011, Qatar was very circumspect. Qatar clearly thought that Assad could have stayed in power had he brought the reforms the people wanted. However, Assad’s highhandedness in dealing with the crisis and his consequent isolation prompted a change of tack on the part of Qatar. Once Saudi Arabia made its opposition to Assad’s regime public in August 2011, Qatar also followed suit. As its involvement in Syria deepened, supporting the armed rebellion became a natural consequence for Qatar. By early 2012, Qatar was sourcing and delivering light weaponry to the armed brigades in Syria. In coalition with Saudi Arabia, it worked through Turkish intelligence agencies and some covert Lebanese mediators. The Stockholm Peace Research Institute estimates that during the last one year more the 70 military cargo flights from Qatar landed in Turkey. Qataris have also worked closely with the exiled Muslim Brotherhood to pick rebel factions to support, with Ahfad al-Rasoul and Farouq brigades currently being the biggest beneficiaries of Qatari largesse. Qatar’s close ally Saudi Arabia though does not eye its links with the Brotherhood favourably. Instead Saudi Arabia prefers backing salafist groups that follow the same brand of Islam as the Kingdom. This rivalry has also led to Saudis and Qataris creating separate alliances with the rebel groups, thus further complicating the situation. In effect, despite still being the biggest donor to the rebellion, Qatar’s influence on arms supplies to the rebels is now on the wane as Saudi Arabia has become clearly the largest supplier of arms to the rebellion. Saudi Arabia has more effective networks to procure arms and it works in close collaboration with Jordan to exploit supply routes through Northern Syria.

Encouraged by their successful lead Arab role in the Nato-led intervention during the revolt in Libya, Qatar’s leaders hoped that its western mates would also enter Syria on the side of the opposition especially as Assad’s removal would also considerably weaken Iran. So far this seems to have been a miscalculation, exposing Qatar’s limitations in a front role in the Syrian rebellion and its recklessness in trying to build up a loyal proxy force in an environment that neither sustains cohesion nor loyalty. It has also undermined Qatar’s perception as a skilful mediator capable of talking to all parties in the divisions that polarize the Middle East. This was the image that Qatar had carefully nurtured over years and that had seen it accommodating the biggest US air base in the region while maintaining cordial ties with Iran or backing Hamas while holding contacts with Israel. In view of its shenanigans as the active protagonist in Syria, it is hard to see Qatar as the Norway of the Middle East any longer. 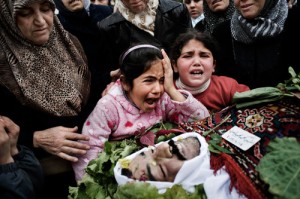 Meanwhile, Syria continues to unravel. The black flag of jihad reigns supreme over much of the northern Syria, in the centre the government and Hezbollah continue to fight the rebels, and in the northeast the Kurds have carved out an autonomous zone. Subsequent to the earlier defections the government and Alawite forces too now comprise fewer but utterly committed and loyal fighters who are fighting for their folks’ survival.  Other minorities have also lined up behind them as they see them as the rampart against the incursion of ruthless Islamism. As the brutalities rise, their main victim seems to be the Syrian state itself. It is breaking up as even in the rebel controlled areas an assemblage of armed groups battling to advance their own agendas have sliced the national territory into armed fiefs. West’s obsession with the change at the top in Syria blindsides it from the deep fractures the war has caused in Syria and the game that Saudi Arabia and Qatar are at in the country. Syria is too badly shattered to be pulled back together again within the next few years. “It is not that Syria is melting down – it has melted down. So much has changed between the different parties that I can’t imagine it all going back into one piece.” says Andrew J. Tabler, a senior fellow at the Washington Institute for Near East Policy and the author of “In the Lion’s Den: An Eyewitness Account of Washington’s Battle with Syria.” 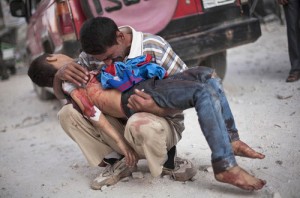 The increasingly alarming brutality of the warriors on all sides and the deepening sectarian schism make the situation almost irredeemable. The government continues to target civilians and the rebels are demolishing the shrines of other sects. An authentic video shows a rebel commander named Khalid al-Hamad, whose nom de guerre is Abu Sakkar, in Homs cutting out a slaughtered enemy’s heart and liver and chawing the heart. A salafist himself, al-Hamad claims the dead soldier deserved the treatment for being an Alawite.  Amidst all the opprobrium it may have attracted, the act has also brought Abu Sakkar much admiration and followership. In addition to numerous fan messages and comments, hundreds of activists changed their Facebook status all at once to read “Abu Sakkar, the heart-eater of Assad’s thugs, represents me.” While this video may be gruesome, it only shows the torture of a dead body in a country whose citizens now routinely torture one another to death. There have also been hundreds of videos depicting the brutalities committed by the government soldiers against the fighters and civilians, many of them women and children. These videos show how horrifically heartless the Syrian war has turned on both sides. Government soldiers and rebels alike are perpetrating savagery and flaunting it on the internet with an incessant uploading of clips showing ears being sliced off, fingers chopped from hands as mementos, organs removed from torsos and other barbaric acts that are inexplicably worse. As a political conflict has mutated into a cruel sectarian war both sides are vying to outdo each other in perverse barbarity. That civil wars are usually crueller than internationals wars is an acknowledged fact but Syrian internecine is becoming more punishing than any other in the recent history. It is hard to see how in the aftermath of all this the numerous religious and ethnic groups that have long been proud of calling Syria their home will go back to living side by side in harmony. A beautiful country in the cradle of history is being laid waste by a pitiless government and the mindless bigoted regimes in some of its neighbouring countries. Beware, Syria is now an inferno that can engulf a large part of the Middle East.