A friend sent me following exchange on twitter with two journalists Mohammad Shehzad and Marvi Sirmed as its protagonists and one Ada Khakwani (whoever she may be) as a support cast. On the first sight it could be taken as an unfortunate altercation, except for the obvious pattern in Mr Shehzad tweets. Some of his remarks can be taken as intellectually transphobic, betraying hostility towards two women who he probably perceives as transgressing our traditional gender norms by challenging him openly. While I consider myself a feminist –though I may be too brown, poor, and passionately straight to be acknowledged as one- and thus support treating women as absolute equals rather than condescendingly in the name of their rights, I still find twitter conversation striking for the above reason and on some other counts mentioned below.

I dislike the argument because it’s anti-intellectual and dismisses reason but what intrigues me is Mr Shehzad’s use of the rightists’ technique of hyper-individualisation of every argument to replace discursive process with the power of personal testimony and accusation. The two trespassing women come across as dealing with a prejudice way out of proportion to their argument. In fact all the prejudice that has been disallowed by modern standards seems concentrated on the two women as an apt reflection of a society where quite a few men wish they could continue to openly despise and insult women. Mr Shehzad does come across as one of them in his tweets. While the gender dynamics in Pakistan increasingly attract great lip service about Islam’s ethos of social egalitarianism, in many parts of the country women continue to experience oppression, manipulation, and marginalization that is justified in the name of Islam.

The language of diversity is an evolving one that requires awareness, understanding, and respect for maintaining divisions across differences of gender or creed. Hence, I feel sorry to see that a male intellectual like Mr Shehzad feels completely at a loss for a common language for talking about and across differences with two women who seek to achieve an understanding of his thought process in certain matters. In developing a common language around diversity it is important that language be affirming and not about creating blame, guilt or pity let alone being replete with profanity and abuse like Mr Shehzad’s idiom in this exchange. Historically our challenge with language as it relates to women is that it has often been used as a tool of oppression for the express purpose of establishing and perpetuating systems of dominance and hierarchies between the genders. Hence it vacillates from being unctuous to becoming outrageously aggressive once the woman being addressed does not seem willing to fall in line. When used in the manner employed by Mr Shehzad, language has systematically helped to minimize and vilify women and justify the patterns of their exclusion, mistreatment and exploitation. While our intentions in the use of language when interacting with or referencing women may not be as ill-spirited and biased as the use of offensive and derogatory words may suggest, when we are not conscious of the power of words and labels our impact can be just as detrimental. Foul language in our young men is also often associated with the fact that they are not usually around people with self-control, but rather have witnessed only dissipation, violent indulgence, and other forms of human misery.

In accordance with the basic Freudian theory, the infantile and childhood impressions of aversion of our young boys toward the original functions of sexual bodily organs remains, and finds expression in feelings, attitude, and finally language. The sexually abusive words such as employed by Mr Shehzad are no doubt the most revealing of the double dimension of consciousness. These are at once used to express hatred and personal pleasure. While people use such phrases to express profound denigration toward another person, the one who says such a thing is, according to Freudian theory, actually exposing depraved paradoxes of his own mind. The language manifests how one’s ego manages the conflicts between the inner and the outer life. The language Mr Shehzad seems fond of using is not healthy for the mind. It is not the expression of strength, power, or triumph, but rather the opposites. It is a cheap trick for influence, for impression, for power, and, at the very best, it is a convenience. It is a psychic expenditure, with no gains from it.

I trust this incident will help Mr Shehzad become aware of the power of his language and learn to treat women and others with respect, dignity, and awareness rather than with a sense of superiority. He can start with raising his vocabulary to an acceptable level without any compulsion to be politically correct.

As an aside in the matter, Mr Shehzad argues that all militants are the same and they have no religion or sect. In the olden warfare any able bodied men in the war zone were considered as militants. Then in the genocides like Holocaust, Rwanda, Armenian pogroms all able bodied members of the targeted group were considered as exterminable militants. Unless Mr Shehzad borrows the logic of a genocide it is difficult to see how he can fail to distinguish between the salafist architects of global terror from the US to Sahel to Indonesia and the innocent women and children being killed in Pakistan in school vans, shrines, and their homes. Do the perpetrators of all such acts in Pakistan belong to the one and same creed, or has anyone else too done it?  Does this comment betray ‘guilt by association’?

It is the most obvious and inexcusable form of rank propaganda as the apologists and the media outlets continuously refuse to distinguish between the identities of those killing and those being killed. This practice continues even though some key media people have been caught lying. I have written and said many times before that in Pakistani media discourse, the definition of “militant” and “takfiri” needs to be debated and clearly established. Otherwise our rhetorical emphasis on avoiding killings and bombings will change nothing. 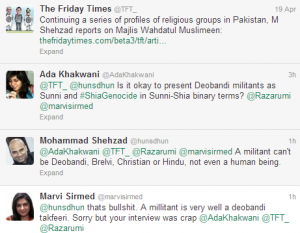 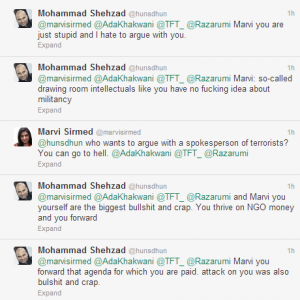 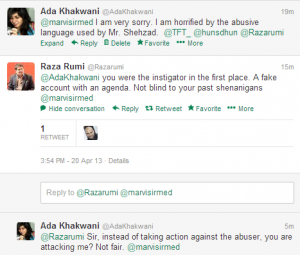 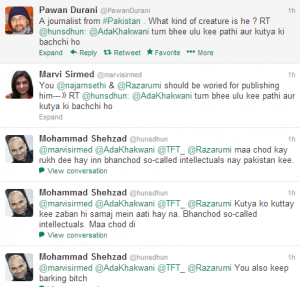 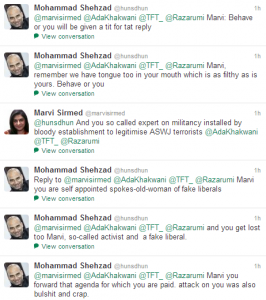 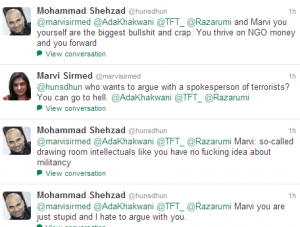