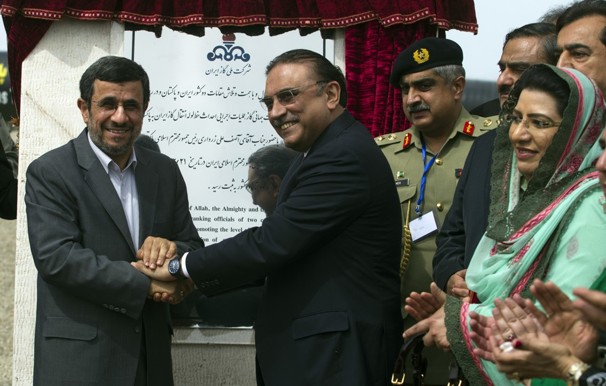 This Monday, Iranian and Pakistani presidents inaugurated the construction of a much-delayed section of a $7.5bn gas pipeline linking the two neighbours. The two leaders unveiled a plaque before shaking hands and offering prayers for the successful conclusion of the project, which involves the laying of a 780km section of the pipeline on the Pakistani side, expected to cost some USD 1.5 billion. Iran claims having already finished its side of the pipeline, which travels 900km from the gas fields to its border with Pakistan. Petroleum ministry officials confirmed that Pakistan is in the middle of procuring compressors and pipelines from a Chinese company and an Iranian company will do the construction. Pakistani companies such as Sui Northern Pipeline Limited, Sui Southern Gas Company Limited and Frontier Works Organisation would also be involved. The pipeline would enable the export of 21.5 million cubic meters of Iranian natural gas to Pakistan daily. The country hopes to overcome its energy crisis with the 4,000 Megawatts capacity of this project. Tehran has agreed to lend Islamabad USD 500 million, or a third of the estimated USD 1.5 billion cost of the Pakistani section of the pipeline. (China has, reportedly, offered another loan of USD 500 million.) The two sides hope the pipeline will be complete in time to start delivery of 21.5 million cubic metres of gas per day to Pakistan by December 2014.

The people in Pakistan have widely hailed the federal government’s decision to go ahead with the Iran-Pakistan gas pipeline project in the face of unrelenting pressure from the US and some of its allies. The decision not only embodies the self-respect of an independent nation but also assures a lifeline for an energy-starved country. While the pipeline will boost both countries’ economies, it is more heartening for me to see this as a step towards Pakistan taking its economic destiny in its own hands. It is encouraging to see that for once the government of our country has stood its ground and has refused to bow to the US in a matter of economic and strategic essence for the country. This also augurs a new perspective and a greater sense of balance in Pakistan’s foreign relations. In fact over the past few years it has been good to see Pakistan using more options in its conduct of foreign relations as it has further developed relations with China and Russia, has become a part of the Shanghai Cooperation Organisation (SCO), and has reactivated the Economic Cooperation Organisation (ECO).

The project, already nearing completion on the Iranian side of the border, would bring desperately needed Iranian gas to energy-starved Pakistan – a country battling a perpetual energy shortage. For Iran it would mean a great helping hand to its economy crippling under the weight of sanctions. The country is losing its key regional markets like India and the inflation already hovers over 30%. In the longer run it affords Iran the potential of the country’s greater economic integration in the region. As for Pakistan, it will alleviate the energy shortage, considered to be the greatest economic challenge for the country. Public protests on energy shortages compound the problem further by adding to the economic losses. Energy shortages are also a serious damper to further industrial and other investments in the country. There were hardly any serious alternatives left for the country, to bolster its energy production, after its political failure to build a consensus on the construction of Kalabagh Dam (the only likely rain-fed dam) after years of squabbling and dithering.

We do hope that the project will play a constructive role in bringing the two countries closer, which many from the West to the Middle East would like to see as enemies of each other. It is imperative that these two countries, whose fates are historically and geographically intertwined, with almost an inversely proportionate population mix of Sunnis and Shias, learn to forge a closer and symbiotic relationship with each other rather than affiliating themselves with more distant Sunni and Shia countries respectively. Their understanding can also play greater role for sectarian harmony among Muslim in the broader resource-laden region of the Middle East and Central Asia. Particularly the Sunnis and Shias of the Middle East have to be able to see through the ‘divide and exploit’ strategy and pursue independent political and economic development of their countries and the region.

It seems that the government had gone through an effective thought and consultation process to consider implications and cover its flanks. The security establishment of the country seems fully on board. China has subsequently announced a loan of USD 500 million to finance the construction of the pipeline, thus considerably assuaging the misgivings about Pakistan’s ability to finance its part of the project. The timing also seems right to diminish the impact of the US’s displeasure as the US will heavily rely on Pakistan for an orderly hardware and troops’ withdrawal from Afghanistan over the next couple of years, the time within which the pipeline is projected to reach completion.

Beyond the economic relief it brings to Iran in the current context, the US is understandably chagrined to see closer ties between these two large countries whose street manifests a mistrust of the US. Also, it feels that Pakistan’s decision to go ahead with this project would be a blow to its policy towards Iran. Hence, Pakistan must be mindful that this project could entail a heavy price in terms of the US’s ire. However, Pakistan did offer the US the first right of refusal by giving it the opportunity to spend USD 1 billion on a mega energy project in Pakistan to resolve the acute crisis. Unfortunately the US was not willing to commit that kind of money and mere lip service from the US would not suffice to run the mills and the plants in Pakistan. I think that in the backdrop of their current need for each other Pakistan and the US will be able to preserve an adequate level of engagement with each other instead of letting this project lead to a major rupture. I hope that both governments would be able to overcome this as another hiccup in their crisis-ridden partnership that continues to roll on.

As the final word in this vein, I feel that the US must correct its bearings to a realistic approach towards Pakistan. How can it expect its relations with a country to dictate Pakistan’s approach towards that country? About time it let go off the ‘our enemy is your enemy’ dictum.
For China this project offers the potential to have land access to energy imports from the Middle East. That would greatly bolster China’s regional position as the country that is likely to account for a significant part of the increase in world’s energy consumption. Thus China sees it as an inkling of a new paradigm of power in the region. This also rhymes well with both Pakistan and Iran’s keen desire to become members of the Shanghai Cooperation Organization (SCO), led by Russia and China, which is showing signs of developing into a fully-fledged strategic alliance.

There are some misgivings that the inauguration of this project could be an election gimmick by the wily Zardari by way of capitalizing on his perceived defiance to the US and looking to take a huge step towards resolving the energy crisis. It seems to appeal at first, especially bearing in mind that traditionally about one-third of non-Sindhi votes garnered by the PPP come from among the Shias of the country. But after subjecting it to much thought, I don’t subscribe to this theory. While Zardari may have played with the timing of the inauguration a little, the analysis of the situation makes it clear that the decision has been a collective one and together the Pakistan decision-makers seem to have reached the conclusion that the country cannot afford to wait any longer in undertaking measures that assure meeting the country’s energy requirements.

Best of luck to the project!