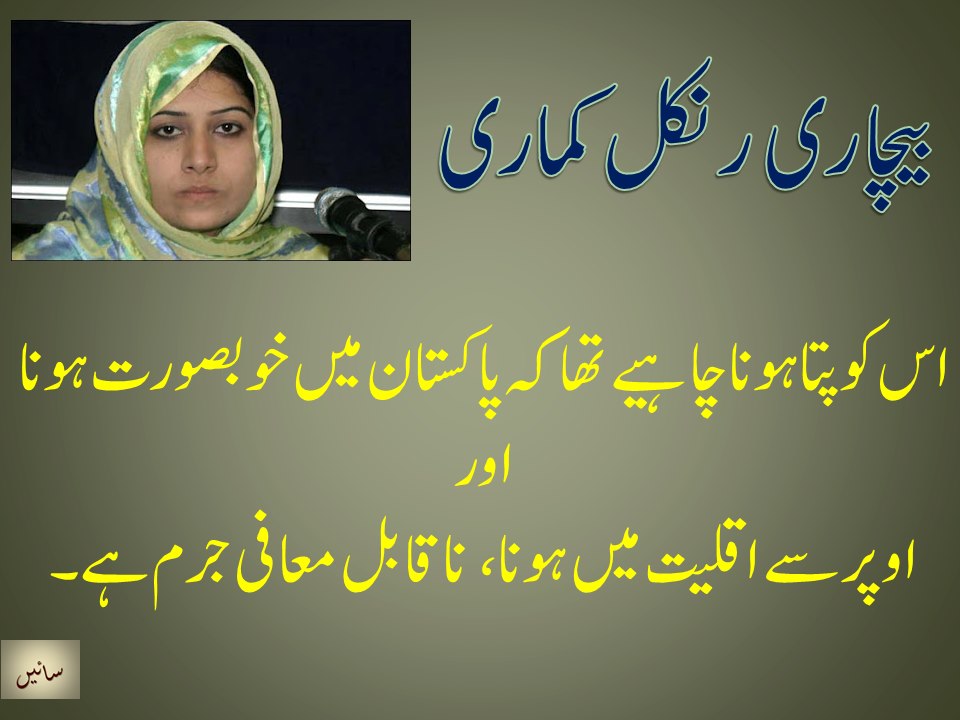 Exactly one year ago this day, Rinkle was abducted from her house. When first presented in a court of law in Mirpur Mathelo, she requested to be returned to her parents. The court overruled her request as her kidnappers needed more time to ‘work’ on her. When presented in court again on Feb 28, she was ‘ready’ to recite the Kalma and became ‘Faryal Bibi’ from Rinkle. Her captors greeted her conversion by firing gunshots in the air in front of the court. Rinkle was then taken to the local Dargah to be ‘kept’ there.

After much hue and cry by Human Rights organizations, the Dragah’s Pirs brought Rinkle to Karachi Press Club to produce a coerced affirmation of the conversion by Rinkle. The matter was escalated to High Court where, in front of Justice Bajwa, Rinkle accused that she had been forcefully abducted and subsequently ‘wronged’. She declared unequivocally and vociferously that she wanted to be returned to her mother. But the court dispensed the ‘justice’, so typical for minorities in Pakistan, by ordering that Rinkle, manifestly against her will, be sent to a shelter house in Islamabad.

Not allowed to hug her mother, she somehow managed to tell her one thing.

“Mother, who are you asking for help? This country belongs to the Muslims. Everyone from the bottom to the top is an accomplice.”

Finally, yielding to pressure from the human right organizations, the newly-converted girl was sent home under police custody. It was the beginning of an ordeal of pain and misery for the poor girl that we are familiar with. This is just one example of Hindus’ persecution in Sind in Pakistan. After Rinkle, it has been the turn of Asha, Durga, Vijanti, Lata, Arvna, Devi, Bhagwanti and many others.

It should not be surprising in a country, which openly separates its population based on their religious identities and even mandates separate electorates for some of them. The troubled minorities in Pakistan need our support in any form. The Hindus in Sind have lived there for over three millennia. Yet, the intolerance gripping the country means that they face a terrible choice of either leaving the country or being persecuted with little or no recourse to justice. Of course, another stark choice is to convert to Islam. Beautiful young girls like Rinkle are the prime candidate for being brought into the fold of Islam.

Keep in mind that religion cannot be ruled out in any case of harassment of a minority in Pakistan. It is increasingly difficult to differentiate between thousands of disputes related to children guardianship, inheritance, and property and such human rights abuses carried out in the name of religion, or more precisely, the persecution of minority religious groups. Denying the new reality that Pakistani society has lost all semblance of religious harmony helps us to find neither causes nor solutions. Persecution of minorities in our society as well as their prosecution for their beliefs and faiths amount to a systematic abuse of human rights with religious legitimacy. The courts frequently kneel down to the radicals’ agenda. The perpetrators are fully aware the violence they commit is forgiven by the law,

All in all, at the national level, the position of minorities remains at risk. They are weak in the eyes of the national laws and the central government has no clear mechanism to protect them. Ahmedis are banned from worshipping in public places, as we witness daily an emerging scenario of intolerance and oppression of minorities. In these unfortunate circumstances, silence and inaction are certainly no options. As Martin Luther King famously said: “In the end, we will remember not the words of our enemies but the silence of our friends”.