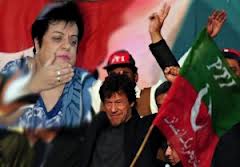 The word change is probably the most over used word in our country. From politicians and journalists to imported Maulvis, there would hardly be a person who shies away from their use of this word. The person who tops the ratings for using the word “change” in their conversations and speeches is our very own Mr. Imran Khan.

Before I begin presenting my case, I would like to clarify that for a large part of my life I have been a great fan of Mr. Khan. The bubble of change has however burst for me, with the PTI’s tall claims failing to impress me.

It is, I believe, imperative to first build a party with a solid foundation before one sets their foot on putting the country back on track. It is on this front that Mr. Khan has failed.

There has been a shift in the PTI’s approach from starting as an ideological party that is rapidly moving to become a party of electables and notables. Supporters of the PTI, who hate every notable who has declined to join their party argue this decision as the only option if they are to win elections. The question that arises here is that would an electoral victory facilitated by feudals, notables and electables really be the victory of their party ideology or would it guarentee the continuation of the same corrupt system that the PTI claims to change.  If it is really the ideology that they want to see prevailing in the end, PTI supporters must press their leadership to offer tickets to ordinary workers from the grass roots, enabling voters to vote for the ideology rather then notable candidates.

Another area that has been paid no heed by the PTI is the political upbringing of their members. A true leader is one that enlightens and educates his wokers about the party’s ideology and mission. It is due to the ignorance of such knowledge that PTI supporters often fail to explain what the party actually stands for. Their lack of knowledge leads to using the word “change” repeatedly or sometimes even resorting to the most absurd arguments with derogatory and abusive language.

The level of tolerance of many PTI workers can be depicted from their treatment of one of their most loyal supporters- Shireen Mazari when she decided to part her ways from the party. Not only was her social networking profile hurled with abuses but even her daughter had to face the wrath of infuriated and apoplectic PTI fans. One could also refer to Marvi Memon’s example. Marvi who was once hailed for her principled stand and urged to join the PTI was described with every possible adjective carrying a negative connotation when she decided to join the PML. Not only was this the reaction of PTI workers and supporters but the PTI’s media cell sent out a message to their supporters to watch a takshow where Marvi Memon had apparently been “exposed”.

If the PTI is serious in its claims of building a truly democratic party with a solid foundation it must take instant notice of these matters. Elections within the party without defending its ideology would be a futile exercise. It would be like painting a building with a weak structure with fancy colours, where its demolition becomes inevitable.