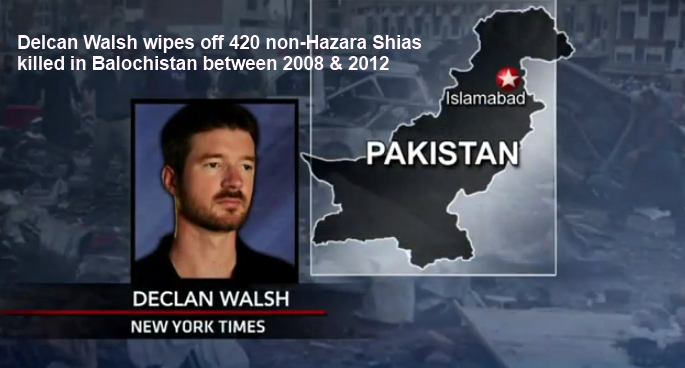 In his interview to the PBS News Hour, Mr. Declan Walsh (Pakistan bureau chief of the New York Times), has provided some details which obfuscate the county-wide Shia genocide.

Here’s a link to his interview:

We ask Mr. Walsh: Can we combat terrorism without identifying the terrorists? https://lubpak.com/archives/236725

2. Presents Pakistan-wide Shia genocide in false Sunni-vs-Shia sectarian binary which is not only simplistic but also extremely misleading and injurious to Pakistani Shias. This Sunni vs Shia sectarian angle hides the internal heterogeneity of Sunnis and also hides the fact that Sipah-e-Sahaba and Taliban (two organizations mainly responsible for Shia genocide in Pakistan) are almost entirely Deobandi militant organizations. Not a single Sunni Barelvi (majority in Pakistan) is a part of Sipah Sahaba and Taliban. On the contrary, Sunni Muslims disown and reject Deobandi militants of Sipah Sahaba and Taliban. According to a recent report published in The Friday Times (January 2012): “Sarwat Ejaz Qadri, a leader of Sunni Barelvi organization Sunni Tehrik, says his group in Karachi has been targeted by the same sectarian groups that target Shias. “We take strength from the Hazara community’s sit-in in Quetta,” he said. “The Sunni community stands with them and we understand their pain because we have been targeted by the same people.”” (Source)

4. Ironically, in the same interview in which Declan Walsh describes the attackers of Shias in Quetta as Sunni militants, he describes the identity of same attackers on moderate Sunni Deobandi Tblighi Jamaat in Swat as an act of Taliban. In other words, he hides the fact that both acts of violence, i.e., against moderate Sunnis in Swat and Shia Muslims in Quetta were carried out by Deobandi militants of Sipah Sahaba Taliban. He hides the fact that Sipah Sahaba is an alias of the Taliban in Pakistan’s settled areas, and that both Sipah Sahaba and Taliban, in the main comprise Takfiri Deobandi militants, with overlapping membership and shared goals, agendas, tactics and sponsors.

5. In sum, Walsh presents the country-wide Shia genocide in Pakistan, in which at least 21,000 Shia Muslims of all ethnic backgrounds and areas have been killed (https://lubpak.com/archives/132675), as a largely Hazara specific ethnic issue confined to Quetta. In 2012 alone, at least 1450 Shia Muslims were killed by Deobandi militants in Pakistan. Here’s a link to the report: https://lubpak.com/archives/236793

We note that in the past, Shia Muslims of Pakistan have rejected misleading reports by Declan Walsh. https://lubpak.com/archives/232097 In other words, Mr. Walsh adamantly continues to misrepresent Shia genocide in Pakistan. In fact, through his lazy reporting, he is enabling further Shia genocide (e.g., by providing legitimacy to Deobandi militants by describing them as Sunnis, by hiding the true identity of the target killed community and their killers, by hijacking Shia genocide in ethnic terms, by completely wiping off the identity and numbers of non-Hazara Shias killed by Takfiri Deobandi militants.)

We want to let the NYT’s Pakistan Bureau Chief know that by such lazy and misrepresenting reports, he is not at all helping a community (Shia) which is facing a pre-genocide situation in Pakistan. We also ask Mr. Declan Walsh (and all other journalists and rights activists) to refrain from misrepresenting Shia genocide in Hazara ethnic or Sunni-Shia terms and instead consider the observations we have outlined in this post.