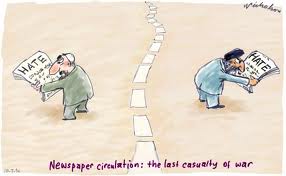 Editors Note : We have come across a malicious article in the Frontier Post which misrepresents historical and ideological differences between Sunni and Shia Muslims. Written by Mr. Saeed Qureshi, the articles maligns not only Shia Muslims but also Sunni Muslims and paints the Islam religion and its various sects in bad light. There is no research or references of any kind. We are posting the Facebook comments by Shia and Sunni members of Jaag Pakistan Jaag and World Shia Forum groups. https://www.facebook.com/groups/jaagpakistanijaag/
and https://www.facebook.com/groups/545122585499556/

First a a copy of the full text of the article in question: