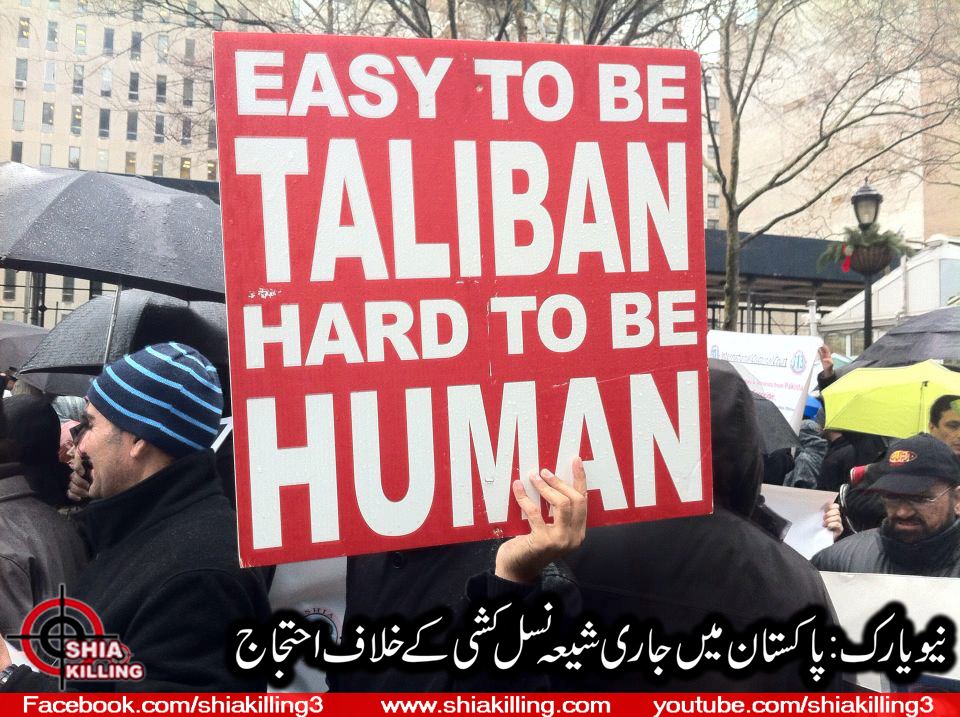 On a freezing cold Friday the 7th of December Shia Sunni and humanity lovers came out with their families and walked the two  miles from the United Nations building to the Pakistani Consulate to protest Shia Genocide at the hands of the Takfiri Deobandi Terrorist. It pains me to see the misrepresenting and attempted hijacking of the of the narrative by Irani Fars Hawks.

We condemn this thinly veiled attempt to propagate Irani State agenda. The Shia of Pakistan are under attack by Takfiri Deobandi Millitants of Sippah Sahaba (SSP),Lashker e Jhangi (LEJ) or their more recent “legalised” name Ahl-e-Sunnat Wal Jammat (ASWJ). This is exactly what the Pakistani Shia of the United States are protesting, supported fully by all peace loving communities in the United States.

Iran’s news agencies need to stop doing politics on the corpses of Pakistani Shia. It will only further alienate the shia of the rest of the world. Message to the Islamic Republic of Iran “lies are not Islamic”.

TEHRAN (FNA)- Thousands of Muslims in the US gathered outside the UN Headquarters and the premise of Pakistan’s embassy in New York to show their anger at the massacre of over 10,000 Muslim Shiites by the US attacks on Pakistan.

According to FNA dispatches, over four thousands Muslims staged a protest rally in front of the UN office and the Pakistani embassy in New York to show their wrath at the US indiscriminate killings in Pakistan, specially against the country’s Shiite population.

The demonstrators, who were furious at the US continued drone attacks in Pakistan, chanted “There is no Taliban”, “Stop Massacring the Shiites in Pakistan”.

They also voiced anger at the Pakistani government’s inaction vis-à-vis the killings.

The rally was supported by some well-known American elites and academic figures such as Noam Chomsky, Reza Aslan and Juan Cole.

Despite repeated protests by Islamabad, the United States has never halted its drone strikes in Pakistan, which has caused a strong anti-American sentiment among the local people. In the latest US drone strike on Thursday, at least four people were killed in Pakistan’s Northwest tribal area of North Waziristan. Thursday’s US drone strike was the 37th of its kind (counted on daily basis) in Pakistan in 2012. In similar move last month, a number of human rights organizations lashed out at the US for its vast drone attacks in Afghanistan and Pakistan which have led to the massacre of a large number of civilians in the two countries. The US has violated the international human rights laws by using drones in military operations which have claimed the lives of large numbers of civilians, a report by the human rights organization said in November.

US human rights violations are not limited to the indiscriminate killing of civilians and paramilitaries in Afghanistan and Pakistan. The US troops have actually done much more horrendous crimes against the regional nations, including the Afghans, during the last decade.

As the world has apparently turned a blind eye to the United States’ continued crimes in the Middle-East, innocent people in Afghanistan are suffering from the horrifying consequences of the depleted uranium munitions used by the American and British soldiers in the two countries.

A comprehensive report released recently unveiled the realities of the US-led invasion of Afghanistan, and warned that the depleted uranium bullets and munitions used by the US forces in the country have left horrifying and disastrous impacts on the Afghan children.