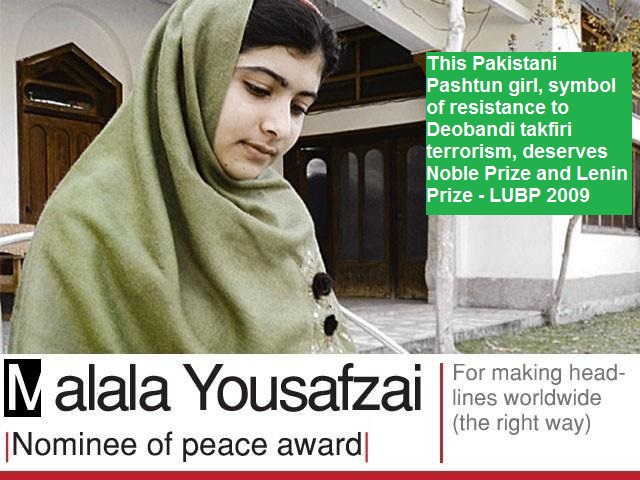 Malala was a symbol for resistance against the oppression and school burning by Talibaan. A beacon of hope for young girls in Pakistan and Afghanistan desiring empowerment and education. Much has been written about this in Pakistani and international media, mostly condemnation. We support LUBP’s 2009 call for her nomination for Nobel Peace Prize and Lenin Peace Prize.

1. I’d really like to see IK (Imran Khan) lead a rally against this attempted murder of a young girl who’s done us proud. A thousand curses on these animals!:

2. Ask malala and her family whether drones should be stopped or increased?

3. Taliban Faith is not based on the Quran, but on ‘Traditions of the Prophet’ that were concocted by the ancestors of the Taliban, some centuries ago. This is how the liberal ideology of the Quran was shackled. The Taliban are the epitome of this is the Anti-Islam that has plagued the world for centuries, transforming Muslims into a nation of helpless lepers. Muhammad the messenger of God achieved it through the power of the pen and the written word. The Messenger was the greatest human being in history who fought a crusade against the religious fundamentalists of his time. We need to educate the local population. Not an easy solution. What they need is Education, Development and Security. This will take at least one or perhaps two generations and then Taliban will die a natural death as their supply routes will automatically choke off. Pakistan has failed miserably in all these three areas and we are reaping the fruits of our own seeds.

4. Dictator Zia-Ul Haq was the first to openly work against education/information/knowledge. Immediately after seizing power he closed down ALL THE PUBLIC LIBRARIES ESTABLISHED BY ZULIFQAR ALI BHUTTO. Those who called Zia-Ul-Haq “AMEER-UL-MOMINNEN” WERE THESE Jahil mullahas of Pakistan.

6. I hear the hue and cry from everyone condemning the Taliban. But everyone seems to forget who is the source of inspiration for Taliban. Will you dare to condemn Muawiyah and Abu Sufiyan who are the role models for Taliban.

Do you know what Muawiyah did to those who still believed in the caliphate of Ali after Muawiya?

Muawiya revolted against the 4th caliph of Muslims, Ali. From the murders of pregnant women and innocent children to rape and pillage and setting the houses of poor believers on fire to kidnapping their women to mass murdering of the believers to command his troops to act as if they were soldiers of Hassan (son of Ali) … there is a long list of crimes that Muawiyah and his follower ”companions” committed. The same thing the Taliban do today.So, before you raise your voices against Taliban, do some soul searching.. condemn Muawiyah!!!7. Attack on young and brave Malalai Yousufzai is not something new or shocking its just an outcome of set of beliefs which are quite common in our society now. And the biggest threat we as citizens face in this country is not these extremists elements itself but the political and strategical support these elements get from political parties, media, army and judiciary. Instead of proper planning to eliminate these set of beliefs which creates these extremist elements our political parties and army is using them for their own vested interests. A proper approach with foresightedness and bravery is required to stand against this set of beliefs if we really want economical and social prosperity in this country … War on terror and acts of terrorism by America are not just the only reasons of these extremist elements in Pakistan … there is a whole culture which has the potential to give birth to extremism in our society which is the main problem …8. Even though I feel like crying out loud,Oh God please don’t take her away from us but frankly when I listened to her past speeches I think to myself, what the hell is this girl doing over here. She is a giant among us timids who r deeply engrossed in our worldly life and this 14 year old kid is saying something which we r not used to of listening. There is so much innocence in her words and her eyes. May God bless her.9. Another Pakistani attacked by the terrorsits of Taliban/Lashkar-e-Jhangvi and the so-called Sipah-e-Sahaba who are killing innocent girls just bcz they are getting education, Shia Muslims and Non-Muslims every day in Pakistan. It is about time for them and the progressive/Liberal peace loving patriotic Pakistanis – the silent majority, to get united and fight back. What are they waiting for???10. “The Taliban said that she was targeted for being “pro-West” and will be targeted again if she survives.” And yet we distinguish between good and bad Taliban! Is this the catalyst to the NWA operation?The case against Talibaan Extremism and Solution
If Malala survives, we will target her again: Taliban
http://thelede.blogs.nytimes.com/2012/10/09/my-small-video-star-fights-for-her-life/?smid=fb-share
http://www.bbc.co.uk/news/world-asia-19882799
http://www.guardian.co.uk/world/2012/oct/09/taliban-pakistan-shoot-girl-malala-yousafzai
http://www.washingtonpost.com/blogs/blogpost/post/interview-with-education-activist-shot-by-taliban-video/2012/10/09/9bb912aa-1211-11e2-a16b-2c110031514a_blog.html

Ms. Yousafzai came to public attention in 2009 as the Pakistani Taliban swept through Swat, a picturesque valley once famed for its culture of music and tolerance and as a destination for honeymooning couples.

Her father ran one of the last schools to defy Taliban orders to end female education. As an 11-year-old, his daughter Malala — named after a mythic female figure in Pashtun culture — wrote an anonymous blog documenting her experiences for the British Broadcasting Corporation.

“I had a terrible dream yesterday with military helicopters and the Taliban,” she wrote in one post titled “I Am Afraid.”

Later in 2009, the army launched a sweeping operation against the Taliban in the area, displacing many militants into neighboring districts or across the border into Afghanistan.

Ms. Yousafzai continued to grow in prominence, becoming a powerful voice for the rights of children in the conflict-affected area. In 2011, she was nominated for an International Children’s Peace Prize; later, Yousaf Raza Gilani, the prime minister at the time, awarded her Pakistan’s first National Youth Peace Prize.

In recent months, she led a delegation of children’s rights activists, sponsored by Unicef, that made representations to provincial politicians in Peshawar.

“We found her to be very bold, and it inspired every one of us,” said another student in the group, Fatima Aziz, 15.

“She had this vision, big dreams, that she was going to come into politics and bring about change,” said Ms. Minallah, the documentary maker.”