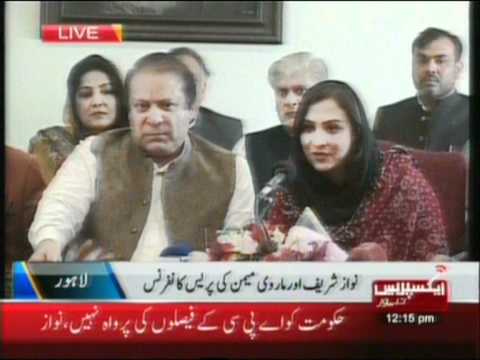 Accompanied by PML-N Gilgit-Baltistan Coordinator Siddiqul Farooq and Central Media Coordinator Asim Khan, she said that the Punjab chief minister had announced an education package for the children of victim families.

“This is not the first time the PML-N president has demonstrated solidarity with terror victims and natural disaster victims. We have given grants to flood victims of Gilgit-Baltistan, Khyber Pakhtunkhwa and Sindh,” Marvi said.

She said that attacks on Shias were a formidable conspiracy against the country. “In line with our PML-N chief Nawaz Sharif’s instructions, I undertook a series of condolence visits to the victims’ families,” she added.

Marvi particularly condemned the targeted killings of innocent people in Karachi, attack in Kamra, Quetta bomb blast and killing of Sunnis in Gilgit on Eid day. “I have met with victims’ families who are questioning the government’s commitment to law and order. This government has failed to protect all citizens of Pakistan, especially minorities,” she noted.

She is showing solidarity with flood victims and those who are killed due to their faith in same breathe.

Does she have some common sense and sense of proportion?

Of course, murder of innocent Sunnis, Shias deserves full condemnation, and the projection of LeJ-ASWJ-Taliban militants as Sunnis too must be condemned. The mayhem Pakistan is currently facing is LeJ-ASWJ vs Sunni/Shia, not Sunni vs Shia.

The discourse used by Marvi Memon is not only ambiguous, it also reeks of false neutrality and reinforces the dishonest Sunni-Shia sectarian violence discourse which is so often promoted by LeJ-ASWJ and their apologists.

Instead of promoting and advertising the list of development work she claims to have completed, Marvi should develop some contextual understanding of the country-wide Shia genocide which is being enabled by none other than two of PML-N’s and LeJ-ASWJ-Taliban’s best friends, i.e., Chief Justice Iftikhar Chuaudhry and Rana Sanaullah Khan.