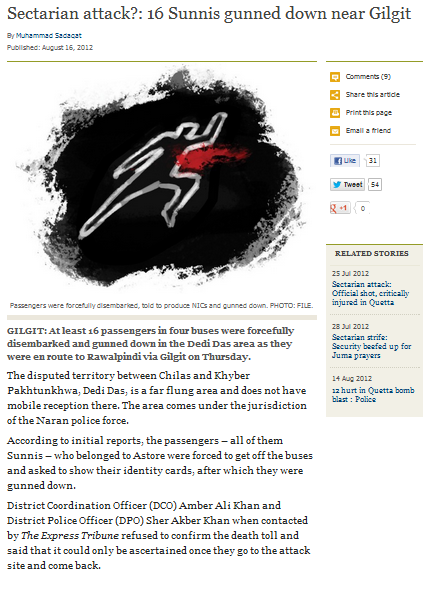 Express Tribune (ET) has a consistent pattern of insulting Shia Muslims, ridiculing Muharram rituals, misrepresenting Shia genocide in ethnic or sectarian terms etc.(This is with some notable exceptions in their editorials.)

Only a few months ago, in December 2011, ET published a hate article insulting and ridiculing sacred rituals of Muharram. The article was later retracted and apology published but the damage, incitement to hate and violence, had been done.

During the last massacre of Shia Muslims in Chilas, ET repeatedly published a picture of an ASWJ-LeJ banner demanding the end to an imaginary “Sunni genocide” in Gilgit Baltistan.

In August 2011, ET published a notorious article by Ejaz Haider in which Shia Hazaras were presented as Iranian proxies thus justifying and rationalizing their massacre in Quetta.

However, what ET (@etribune) has done today will cost it very dear in terms of credibility.

At least 30 Shia Muslims were killed today by Jihadi-Deobandi terrorists belonging to ASWJ (Ahle Sunnat Wal Jamaat, other names LeJ, SSP), an affiliate of the Taliban and Al Qaeda.

According to the sources there were more than 100 passengers in three buses and all of them were Shias.

Sources say that the passengers were forced to get off the buses and asked to show their identity cards after which they were gunned down.

The miscreants easily managed to escape after the incident.

According to AFP, gunmen pulled dozens of Shias from a bus and killed them at point blank range. The incident happened in the northwestern district of Mansehra as the bus was travelling between Rawalpindi and Gilgit. Officials stated that “Ten to 12 people wearing army uniform stopped the bus and forced some people off the bus,” said Khalid Omarzai, administration chief in Mansehra. “After checking their papers, they opened fire and at least 20 people are reported to have been killed. This is initial information and the final toll may go up. They are all Shias,” he said.
Local police official Shafiq Gul told AFP that the gunmen were masked, but said the victims were pulled from three separate vehicles in the district, which neighbours the Swat valley, a former Taliban stronghold.

According to Shia Killing website, most of the victims were Shia Muslims from Astore region. Names of some of the deceased are as follows: Ghulam Nabi, Qari Hanif, Musharraf, Yaqub, Dr. Nisar, Daulat Ali, Ishtiaq, Sajid, Muhammad Mazhar, Jalaluddin, Ghulam Mustafa

However, ET misrepresented the massacre of Shia Muslims as Sunni massacre. The oppressed were presented as oppressors.

Passengers were forcefully disembarked, told to produce NICs and gunned down. PHOTO: FILE.
GILGIT: At least 16 passengers in four buses were forcefully disembarked and gunned down in the Dedi Das area as they were en route to Rawalpindi via Gilgit on Thursday.
The disputed territory between Chilas and Khyber Pakhtunkhwa, Dedi Das, is a far flung area and does not have mobile reception there. The area comes under the jurisdiction of the Naran police force.
According to initial reports, the passengers – all of them Sunnis – who belonged to Astore were forced to get off the buses and asked to show their identity cards, after which they were gunned down.
District Coordination Officer (DCO) Amber Ali Khan and District Police Officer (DPO) Sher Akber Khan when contacted by The Express Tribune refused to confirm the death toll and said that it could only be ascertained once they go to the attack site and come back.

ET editors have blood of innocent Shias on their hands

Sadly, but not expectedly, a few hours after ET published the false news of Sunni massacre in Naran, ASWJ-Taliban terrorists in Quetta avenged the fictitious Sunni massacre by killing 3 Shia Hazaras in South Western city of Quetta.

We can’t forget and forgive that 3 Shia Hazaras in Quetta were killed after @etribune published false news of 16 Sunnis massacred in Naran. Relatives of 3 Shia Hazaras killed in Quetta today will be entirely justified to lodge an FIR against owners/editors of @etribune for their incitement to violence against Shias.

The ET reporter who misreported the Shia massacre, to give it a sectarian color, was none other than one Muhammad Sadaqat who only three months ago (in May 2012) had published a false, sensational report of murder of six women in Kohistan for attending a mixed gathering. At that time, his aim was to deflect attention from the recently conducted Shia massacre and to provide a convenient deflection to conveniently selective moral NGOs.

We also want to clarify that it won’t be any less bad if it turned out to be Sunni killing. It’s our consistent stance that Shias are not being killed by Sunnis but by State-sponsored Jihadi-sectarian monsters. At the same time, we can’t ignore that the ET (an emerging Pakistani tabloid, aptly labelled by a Pakistani blogger) has a consistent pattern of insulting Shias and misrepresenting #ShiasGenocide. All documented.

Many Shia activists are terming it as a deliberate attempt by ET to create first impression in order to counter the discourse of State-sponsored Shia genocide. Many Shias fear further reprisal attacks on them because Jihadi-sectarian terrorists will read that Shias killed Sunnis, which may incite them to further violence against Shia Muslims.

There are clearly certain elements in Pakistani establishment and media who want to provoke secterianism in order to potray State-sponsored Shia genocide as Sunni-vs-Shia sectarian violence. They always try to misreport Shia genocide to enable further mass murder of Shia in Gilgit-Baltistan, Quetta, Karachi and other areas.

In other words, ET has enabled and ought to be treated as complicit in further acts of Shia genocide in the country. They have augmented the already existing hate speech and violence against Shias prevalent in Pakistan.

Pakistan Equality and Human Rights Commission (‏@PakistanEHRC) said the following: “We condemn misreporting of #ShiaGenocide by #ExpressTribuneShiaPhobia. Must publish a prominent apology.”

We support the PEHRC’s call and demand ET to retract their article and publish a prominent apology to Shia Muslims and all Pakistanis. ET must also review and amend its consistent bias in neglecting or misrepresenting the State-sponsored Shia genocide in which at least 19000 Shias have been killed so far.

Update: After much protest, ET finally replaced their heading and also appended the following note:

“Correction: An earlier version of this article had wrongly reported that the passengers were Sunnis. The error is deeply regretted. The reporter’s copy has been replaced with an AFP copy.”

However, the AFP copy which is now, uncritically, published by ET editors is equally disgusting. It blames Sunnis for #ShiaGenocide in Pakistan. It states “On April 3, a Sunni Muslim mob dragged nine Shia Muslims from buses and also shot them dead in the town of Chilas, about 60 miles south of Gilgit.”

This is equally disgusting and shameful!

Shias and Sunnis must boycott and surround those media offices which misrepresent State-sponsored Shia Genocide in sectarian terms.

Previously, Pakistani media had shown MWM rally in Lahore as a rally by DPC showing Samiul Haq and Hafiz Saeed speaking to a Shia rally.