Devastating flooding in northwestern Pakistan has now taken more than 1,400 lives and a left about 1 million people homeless. Although the government has announced it is stepping up relief efforts, it has been widely criticized for its slow and poorly coordinated response.

The perceived failure of the government has opened new vistas for pro-Taliban religio-political parties and outlawed militant organizations to win the hearts and minds of locals in this war-weary region.

The current catastrophe marks the third time since late 2005 that jihadist and pro-Taliban elements in Pakistan have been able to cash in on natural or man made disasters to broaden their base of support and win the sympathy of the public by extending support to battered people.

On October 8, 2005, a 7.6-magnitude earthquake struck Pakistan-administered Kashmir and Khyber Pakhtunkhwa Province. Despite a major international relief effort worth billions of dollars, certain religious and jihadist organizations also moved into the affected areas to offer aid.

In April-May 2009, the Pakistani security forces launched the massive Operation Rah-e Raast to dislodge militants from the Swat region. Hundreds of thousands of people were uprooted from their homes and forced to endure sweltering heat in tent cities while waiting for the government to provide them with proper shelter and reliable food supplies. Religious and pro-Taliban groups took the lead by distributing prepared meals door-to-door and providing free health care, drinking water, and shelters.

A Gift To The Islamists

The current deluge has submerged whole villages and towns, once again providing an opportunity for religious extremists and jihadist outfits to get the jump on the authorities by extending a helping hand to people in dire need. 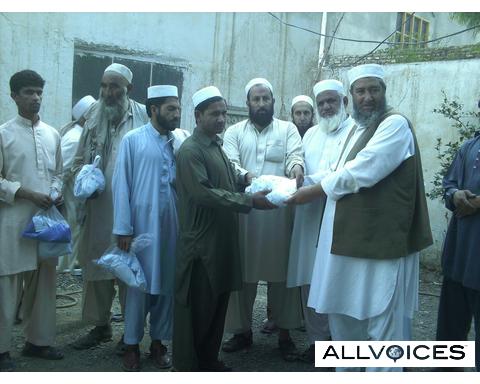 The vast majority of locals had earlier distanced themselves from those elements because of their violent tactics, including bombings, targeted killings, and suicide blasts that killed and maimed many bystanders in the name of Islam. In February 2008, a six-party religious coalition called Muttahidda Majlis-e Amal ran under the banner of Islam in general elections in Khyber Pakhtunkhwa Province, but was defeated by secular rivals the Awami National Party and the Pakistan People’s Party.

Known for their “street power” in the perplexing Pakistani political arena, the religious parties could not organize a single major political gathering, despite the failure of the secular parties’ government to consistently provide basic services, including health care and education.

However, the current flooding — to which the secular government failed to respond with sufficient urgency — has once again enabled the religious parties and their welfare wings to reach out to the masses and win their sympathies. Prominent among the religious organizations active in the disaster zone are the Al-Khidmat Foundation (welfare wing of the hard-line Jamaat-e Islami party) and the Falah-e Insaniyat (a group believed to be a renamed version of the banned Jamaat-ud-Dawa of jihadist leader Hafiz Mohammad Saeed, who previously headed the banned Lashkar-e Taiba).

These organizations have already established camps in flood-hit areas in Nowshera, Charsadda, and Peshawar, as well as in the Swat region. In addition, they are actively soliciting donations to support their work from across the country, thus creating the impression nationally that they are more concerned about flood victims than the government is.

Boots On The Ground

The provincial government has been appealing desperately for assistance from the national government and the international community, but few promises of assistance have been forthcoming. The United States, the United Kingdom, and China are the only countries that have pledged financial assistance so far.

In what was widely seen as an act of desperation, the Khyber Pakhtunkhwa government suspended the province’s annual development plan on August 3 and diverted 60 billion rupees ($700 million) from it to the flood-relief effort.

Nonetheless, the impression on the ground is that the religious charities are more active, both in terms of actual services to victims and of public relations. They seem well on their way to using the crisis to regain much of the support they lost in 2008 and 2009.

At a news conference in Peshawar on August 2, the deputy head of Jamaat-e Islami, Sirajul Haq, promoted his party’s relief effort and said he believed the local government had failed in its obligation to help the flood-ravaged region.

Haq’s party generally hesitates to condemn terrorist attacks in Pakistan or abroad and is believed to be sympathetic to the Taliban struggle against NATO forces in Afghanistan. Because of these stands, the party had lost the support of many Pakistanis, particularly Pashtuns. But that could be changing now.

Daud Khattak is a broadcaster with RFE/RL’s Radio Mashaal.