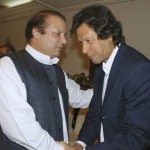 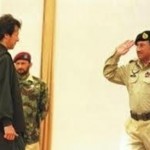 This post is in light of ‘news’ of meeting between Imran and Musharaff  and the following piece by Dawn. Here is an extract:

While the Musharraf League is not denying Musharraf-Imran contacts, it says efforts are under way to form a `major alliance` of different political parties other than PPP and PML-N to give an alternate leadership.

“We have started making efforts to form an alliance of Mutahidda Quami Movement (MQM), Pakistan Tehrik-i-Insaf (PTI), All Pakistan Muslim League (APML) and breakaway factions of Pakistan Muslim League-Quaid (PML-Q) in next general elections so that people have option other than PPP and PML-N,” Fawad Chaudhry, spokesman for Musharraf`s APML, told Dawn. He said the people wanted an alternate leadership that could steer the country out of crises and address their problems.

To a question about rumours of Imran Khan`s meeting with former army chief president Pervez Musharraf in London, Chaudhry said: “The party does not deny nor confirm about the meeting, however, it wants Mr Khan to join hands with us for the larger interest of the country. Imran was critical of Musharraf when the latter was a military chief now he is a politician.”

It is clearly evident that agencies are now trying to form a new IJI. It remains to be seen if PML-N would join or if it remains in the state it is going.

It is likely that Imran Khan has been given the charge to form this alliance – hence his meetings with everyone but PPP (with whom he seems to have vowed to never meet).

Khan knows (or you hope he does) he can be a big player till N doesn’t join – if they do, he becomes marginalised again – so he’d love to remain APML with PML Q and MQM, JUI and JI forming a mixed bag alliance pulling left, right and centre; similar to 2002 really – all the King’s men.

Knowing Imran Khan, he’d muddle it up – either by not agreeing with a party (Most likely MQM, needed to form a Sindh govt) or letting N join – indications of which have already taken place – ruining his own chance of ever being anything worthwhile.

What does it mean for PPP?

I have always considered PPP and ANP to be a real alliance – and this scenario would again clear the situation, if it wasn’t clear already. There are only two Left leaning, progressive parties in Pakistan and they are those two. An isolated PPP and ANP may be bad for numbers in current Parliament, but not for next elections. It leaves voters with very clear choice.

This is also a tacit acknowledgement by the agencies that PPP is a power to reckon  with. Their interest is in a fragmented Pakistani Political scenario, with many parties each representing their own agenda. Having a national party ruins that, because to manipulate and crush small mice is easy, to kill a lion is hard. For all purposes PPP is only federal party with large bases in all four provinces. They must fabricate an alliance to counter it. Even if it means going against their long term plans.

Is Imran Khan the new choice of agencies (ISI) in Pakistan?