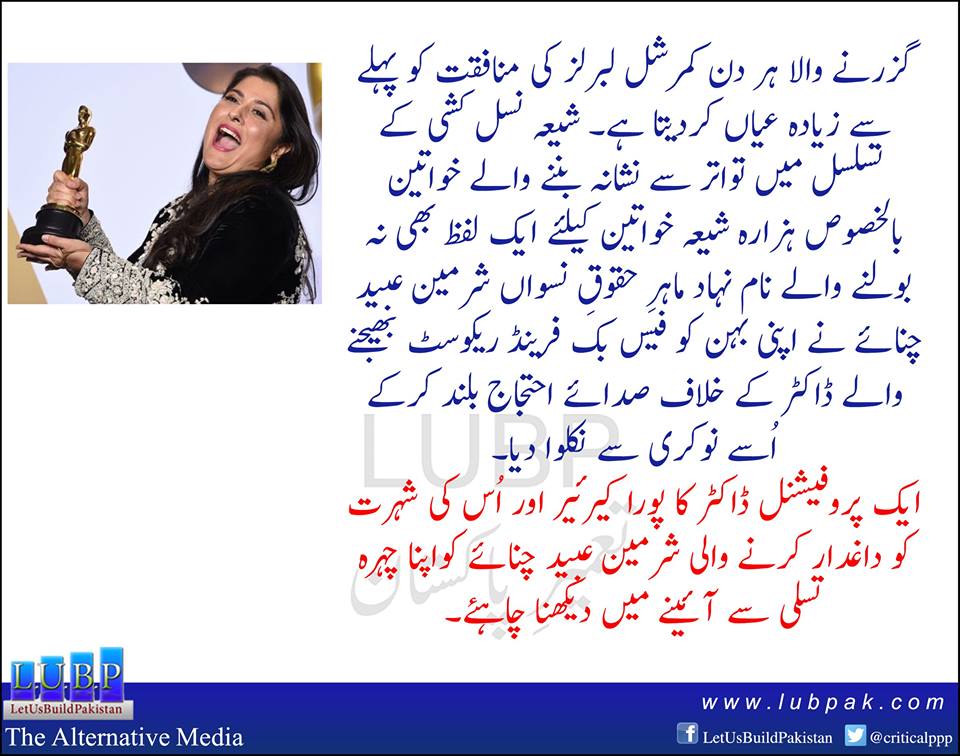 Narcissism, hypocrisy and Elitism make it difficult to have a reasonable and objective discussion on sending Facebook friend requests. The coordinated cloud of celebrity activists lecturing the rest of Pakistan has barely resulted in social evolution. This tribe of elites has made it virtually impossible to objectively examine the crucial issue of harassment vs unprofessional behaviour.

In 2009, a foreign-funded Identity” (Shanakht) festival whose purpose was to provide historical perspectives, showcased a deeply disturbing, misogynist and prejudicial sketch. The sketch was a depiction of a giggling Benazir Bhutto literally sitting in the lap of her father and brother’s murderer, General Zia Ul Haq! In reality, Benazir Bhutto and her mother had lead the pro Democracy protests against General Zia ul Haq and had suffered jail, solitary confinement and exile. In one instance, a Zia ul Haq policeman (later promoted by Zia Legatee Nawaz Sharif) smashed his baton on the head of Nusrat Bhutto grievously wounding her.

This is the actual history of Pakistan but the warped and revisionist hypocrites of Pakistan’s civil society cannot bring themselves to acknowledge these facts. Doing so exposes their dishonest, disproportionate and selective political biases.

The organisers of this “festival” slimily tried to pass off this disturbing sketch as “art” but that went against their own stated mandate. One of the leading organisers of this so-called “identity festival”, an accomplished and technically qualified film maker had already made her name for herself and many of the causes she championed had intrinsic worth.

Unfortunately, like others from Pakistan tribal and elitist liberals, the lens applied to these pressing problems often failed to provide the necessary prescriptions. These problems like the Taliban, honour killings, acid attacks, misogyny and authoritarianism are all worthy causes. But the manner in which Pakistan’s commercial liberals tackle them makes these problems worse. This is worsened when it appears that issues are selective, championed for material and populist gains and in denial of massive income class disparities.

For instance, how can one champion Mukhtaran Mai and the Dictator General Musharaf around the same time and not be oblivious to the irony?

How can one reduce the issue of the Taliban to poverty and the lack of education? How does this simplistic binary deal with the contradictions of highly educated elites from Salafi-Deobandi backgrounds committing and supporting terrorism!

How can one mildly critique Salafi evangelists like Farhat Hashmi and omit Farhat’s attacks on Ashura, Maulood and Rajab commemorations.

SOC went one step further and publicly denied the ongoing genocide of Shias in Pakistan.

While her Oscar triumphs raised the burning issue of acid attacks and honour killings of women in Pakistan to an international audience, some argued that they these films had different motivations. The victims of acid attacks accused SOC for exploiting their plight and then leaving them in the lurch. Still, one should not deny that the well produced documentaries talked about issues that desperately need to be addressed by the government.

While it would be unfair to dismiss SOC’s Oscar triumphs as simply being motivated for personal gain, one cannot completely ignore the element of elitism that pervades the section of society that exults in her achievements. It would not be inaccurate to contend that SOC’s films remain confined to an elite audience in Pakistan and have not permeated amongst the masses. The issues addressed in this films need to be dealt with but how effective are these films when their makers and audience are often viewed as removed from the rest of the masses.

One hopes that these contentions are inaccurate as there is no place for the reprehensible act of throwing acid and killing women. This is sick and represents in Pakistan what Weinstein, Woody Allen, James Toback and mass shooting maniacs represent in the United States.

So when SOC raises the question about doctors not sending Friend requests to their patients, she has a point. This may not be the ideal behaviour expected from a doctor. It could be socially inappropriate to the extant that it requires a Delete click to dismiss the entire issue.

However, is a simple friend request tantamount to harassment?

To most of the planet, it just requires a name.

The manner in which this issue was taken up and the celebrity privilege that it entailed has ruined the chance of any constructive debate.

If the doctor’s act of sending a friend request was unprofessional, then what about the unsubstantiated leaks being attributed to an alleged board member of the hospital?

Can a board member reveal private discussions to the general public about the punitive action taken against the doctor?

Can the same alleged board member be quoted on the alleged serial tendencies for similar acts by the same doctor that could also be defined as inappropriate?

One thing is for sure. That celebrity has the baggage of elitism and hypocrisy that often damages the very cause they are used to ostensibly support. There are evolving social norms on social media and if person A does not like unwarranted Friend requests, She/He has the right to take appropriate action.