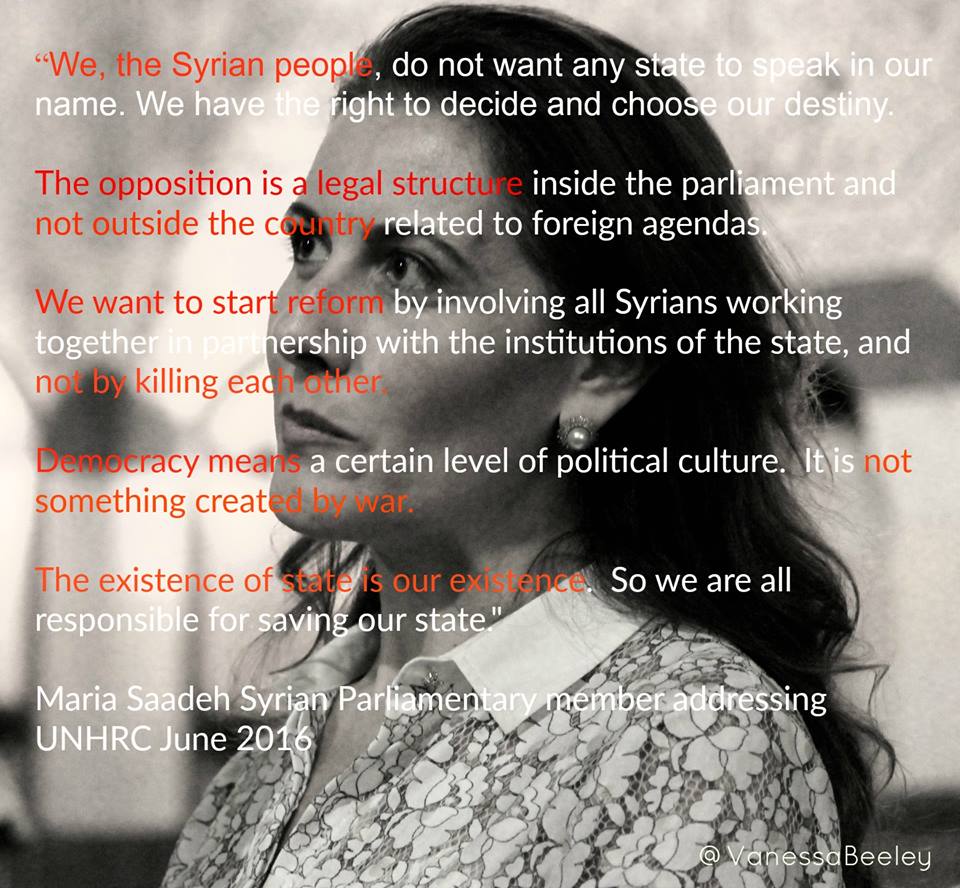 “Syrian Women in politics faced with war and double standards.”

By Maria Saadeh, Member of the Syrian Parliament

I would like to talk about my experience as a Syrian woman facing a war against her country.  I would like to explain why I chose to be in parliament at the beginning of the crisis, and what I have faced during these past four years in politics.

In 2011, some member states of the United Nations began accusing the “Syrian regime” of being sectarian, a dictatorship, repressive, exclusionary, and so on.

In order to overthrow the Syrian government, they caused a war to break out in Syria.

Under the pretext of of democracy, freedom, human rights and the notion of protection, they started pre-fabricate the so-called “political opposition” to the Syrian regime, seeking its overthrow.  They created and supported armed groups – the so-called moderate opposition – to fight against the regime.  In fact, these groups destroy, kill, commit massacres and attack the Syrian people.  These groups are now terrorist organisations which threaten not only Syria and the region but also the whole world’s security and peace.

So, in the name of democracy, these states are refusing to the Syrian people the right to chose its own destiny; they violate the people’s democratic sovereignty by designating and choosing who supposedly represents the “opposition” and sometimes even the legal representatives of the Syrian people.

As someone who wanted to stand up against this flagrant violation of the rights of the Syrians to choose their own destiny, and in order to have a legal platform from which to speak in the name of all Syrians, I was lucky enough to be elected to the Syrian parliament in 2012 as an independent deputy not linked to any party and who had never been in politics before.  I played my role as a Syrian citizen, and as a woman and as a Christian, in order to be able to bring the following messages to foreign states:

There is no protection in the refugee camps in Turkey or Jordan.  Aggressive violations there threaten the life and human rights of refugees.

Syrians are dying in the Mediterranean as they try to cross illegally to be refugees in the West without any real action taken by Western states to save their lives.

The West emoted over the death of the Kurdish boy Aylan Kurdi but in Syria children have been being killed every day for five years by terrorist organisations supported by these same states.  A week after the death of Aylan Kurdi, a boat transporting Syrian families was attacked by Turkish police using water cannon trying to kill all the passengers before entering Turkish waters.  No media mentioned this.

In the name of freedom and freedom of expression, all official relations with the Syrian state have been broken off.  All communication with Syrian society has been blocked.  Western media report only the voice of the opposition and distort the facts.

This is media terrorism.

In 2012 and 2013, however, our visas were refused – we were a parliamentary delegation – first for a proposed visit to Italy and then for a visit to Canada.  This latter visit was for a Syrian parliamentary visit to the Inter Parliamentary Union and the refusal of the visa was therefore in direct violation of international law and the rules of IPU member states.  We have often asked for an explanation from the Italian and Canadian authorities but have never been given an answer.

I also tried to correct the image of Syria being given in the Western media by putting together a network of journalists who were prepared to report accurately.  The accumulated result after four years of work has been good and we feel that we have achieved a lot in changing the state of public opinion in Europe and the West as a whole.

Economic sanctions have been applied to punish the Syria regime. Since 2011, member states of the UN have undertaken collective punitive action against the Syrian people.  In March 2015, I presented here at the Human Rights Council a document entitled “economic terrorism” which compared the results of terrorist organisations in Syria with the effects of coercive measures taken under the label of “economic sanctions”.  These sanctions violates international law in the same way as terrorism does.  Their results and effects are the same; the aim in both cases is to attack Syrian society and to violate human rights, especially the right to life.  As a result of the sanctions, unemployment has risen from 8.6% in 2010 to 50% in 2014; poverty reached 75% in 2013 where it was 9% in 2010; the number of children in primary education has fallen to 50%; the same number of hospitals and factories have closed as a result of the sanctions as as a result of terrorism.  In the same paper, I also showed the relations between the states applying the sanctions and the terrorist organisations they support.  I also discuss the relationship between them in despoiling Syria of its natural, economic and cultural resources.

Many conferences have been held in Europe on the theme of protecting Syria’s cultural heritage.  However, over five hundred historical sites have been destroyed by terrorist groups aided and abetted by the Turkish mafia which is in turn connected to the government of that country.  The goal is to destroy the society’s culture.  We can call this cultural terrorism.

In 2014 I travelled in a personal capacity to take part in a high-level UNESCO conference on protecting Syria’s cultural heritage, to which no official representative of the Syrian state had been invited.  I tried several times to speak and finally succeeded, after I protested against the dictatorship of the organisers.  I spoke as a citizen and parliamentarian and also as an architect specialised in the restoration and conservation of historical sites.  They tried several times to interrupt me.  But I managed to get my message across that the only guarantor of a country’s heritage is its own people who hold on to their history and are rooted in their homeland.  None of the states who have attacked Syria by proxy have made any statement in favour of the liberation of Palmyra.  Why is this?

By the same token, many conferences have been held on the subject of the protection of Christians and other minorities. These conferences have discussed the objective of changing the social mosaic of Syria, dismantling its rich tissue and dividing its constituent parts against each other.  But evacuating Christians from the Middle East means eliminating Christianity from the whole world.  This goal of dividing Syria internally is also shared by those who support the creation of a separate Kurdish state on Syrian territory.  The purpose is to separate them from the Syrian mosaic.  The division of territory starts with the internal division of societies on the principle of one against another on sectarian or ethnic bases.  Like all Syrian Christians, I refuse to be labelled a member of a minority.  I reacted to this label by working hard with all components of Syrian society so that we all collaborate together to support each other saving our state, culture, civilisation and heritage.

In December 2010, Nicolas Sarkozy said that France is responsible for saving Christians.  A week later, Pope Benedict XVI, in his message on the occasion of the international day of peace, said that Christians in Europe suffer from persecution and that Europe must reconcile itself with its own Christian roots so that it can then create a real dialogue with the rest of the world.  If the highest authority in the Christian world says that Christianity is under threat in Europe itself, how can European states protect Christianity in the Middle East?  Worse, the French Foreign Minister, Laurent Fabius, said of the Al-Nosra terrorist organisation, “Ils font du bon boulot,” (“They are doing a good job”) on 12 December 2012 at a meeting of the Friends of Syria in Marrakesh.

Similarly, lots of conferences have been held on protecting women’s rights in Syria.  Such conferences claimed that they wanted to involve women more in the political process but in fact only women from the opposition were invited.  On 13 January 2014, the UN organised a meeting here in Geneva to appoint women to represent Syrian women in the Geneva 2 talks.  However, they neglected to chose any woman from inside Syria who had suffered from the war, who had resisted or worked hard inside the country for their rights and indeed their very existence.  As a parliamentarian who is a woman, I wrote a letter to Mr Ibrahimi together with other prominent women from Syrian public life asking him to change this policy and to stop reducing Syrian women to a selected part of the opposition only.

In the name of protecting civil society, state and society have been ripped apart.  But civil society means the partnership and collaboration between the state and society.  The day after my conference on economic sanctions here last year, in which we spoke about the suffering of the Syrian people, but which was poorly attended, there was another conference full of funding organisations addressed by two Syrian women speakers who had spent the whole of the war in Europe.  They had the gall to say that the Syrian state made it impossible to work with civil society so they decided instead to work with civil society in areas controlled by Daesh !  And they were asking for money to help transform these areas into civil and secular societies.

By contrast, I have been working for four years focussing on the active civil society that was born as a result of the war.  I started with the concept of “the sustainable peace” and then created the project called “Houna Souria”.  This is a new national project based on a new mechanism through which all Syrians can meet, as active members of civil society but independently of our political or religious affiliations, to discuss, propose and develop national projects with the aim of finding solutions and helping the Syrian state face the war, resist, recover and rebuild the future.

With this goal in mind, we organised a workshop entitled “Our Word”.  One hundred personalities were invited, representing all sections of Syrian society.  Our message was twofold: first for the state, asking for partnership; second to the outside world to take up its responsibility for stopping the war.  We will continue our work based on an active civil society directed towards rebuilding the future.