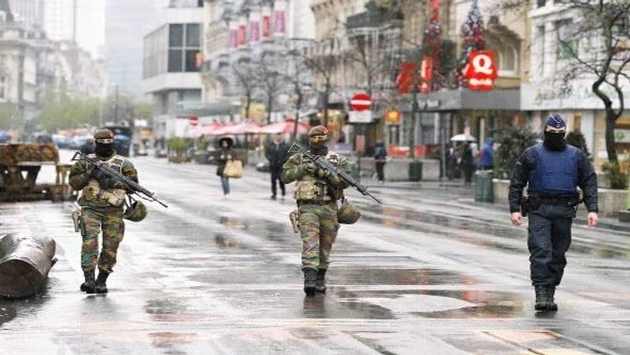 Dozens are once murdered in the tragic attack in Brussels by Saudi/GCC sponsored Wahhabi terrorists.

The following chalking points are hurriedly drawn up and awaiting approval from Saudi princes who are still busily attending to their cocaine, face farting and “whipping the help” daily routines. Here they are:

15. Saudi-paid lobbyist Hillary Clinton on Brussels attack: “We came, we saw, they Died!”

14. Syrian Human Rights Observatory from his London office, on the Brussels attack: “Belgium regime fighters sprayed the peaceful Wahhabi protestors in Antwerp – with Haram Beef Fat. Peaceful Protestors used slingshots to fight back. 50 Belgian regime fighters were killed – for which Assad is responsible!

13. Saudi Crown Prince on those protesting the Brussels attack: “This aggression will not stand Man! New s–t has come to light”

12. Ken Roth of HRW and whichever doctor was on Saudi call at MSF, on the Brussels attack “The terrorists were just peaceful protestors in 760 BC but we did not support them – poor terrorists had no choice after being offered only 3 sauces to go with their french fries”

11. The attack in Brussels was in a “Hizbullah/Assad regime stronghold” – so innocent people being killed here is not so bad.

10. The attack in Brussels was because of the Flemish Feudal lords in that painting by Rubens. Don’t blame the Wahhabi perpetrators – blame Reubens from 400 years ago

9. Brussels is part of the Christian-Shia-Jewish-Yezidi axis of evil

7. Rembrandt and Vermeer paintings were disrespectful of Sahabas like Yazeed and Muawiya.

6. The terrorist attack in Brussels is part of a Saudi-Nicaraguan proxy war.

5. Brussels and Riyadh both have questionable human rights practices. Its all there in the latest Amnesty International report where Belgian numbers are spiked by hearsay. Belgians dry age their steak for 45 days! Thats act is morally equivalent to Saudis sponsoring Wahhabi and Deobandi terrorism worldwide. Belgium = Saudi

4. Don’t blame the terrorists – blame the victims. It has often worked in Pakistan especially when blaming those attending those pesky Ashura and Maulood julooses.

3. (Wahhabi) Islam is a religion of peace – its those Belgian chocolates that are the real problem.

2. Belgium has Shia Muslims – and we all know that ‪#‎ShiaGenocide‬ is one of the favourite past times of the Ummah