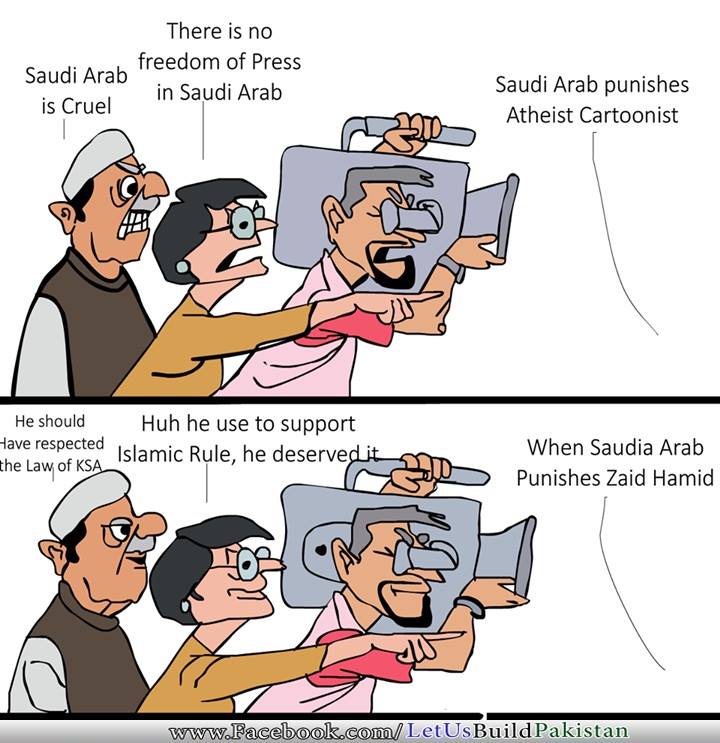 Reports that Zaid Hamid was sentenced by the Saudi authorities  for being critical of their regime should have been met with loud protests in Pakistan – especially by the liberal champions.  After all, Saudi Arabia is probably the most totalitarian society on this planet and responsible for nearly all of the terrorism that is taking place in Pakistan.

Saudi Arabia is the most significant donor to Deobandi madrases: the breeding grounds for ISIS-affiliated, interconnected terrorist groups like ASWJ-LeJ, Taliban, Jundullah, Jamaat ul Ahrar, Jaish e Mohammad etc.  Since quite some time, Zaid Hamid has been one of the most vocal opponents of this Takfiri Deobandi lobby responsible for over 90% of the terrorism in Pakistan.

which is a collection of 2 prominent videos where Zaid Hamid has come out openly against the Taliban – which is more than can be said for the Pakistan’s current prime minister, the Saudi stooge Nawaz Sharif or Imran Khan. 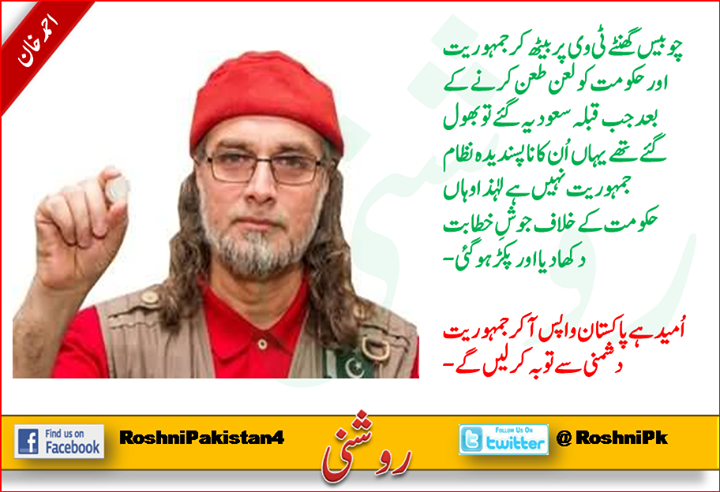 One can disagree with the other positions and opinions of Zaid Hamid but on the issue of Deobandi Terrorism, he is clearly more articulate and clear than many of Pakistan’s elitist (fake) liberal mafia.  Zaid Hamid is clear in his stance against takfirism which has its roots in the Khariji and Deobandi movements.  On the other hand, this fake or commercial liberal mafia continues to play a leading role in obfuscating and hiding the central role of Takfiri Deobandi organisations in terrorism. 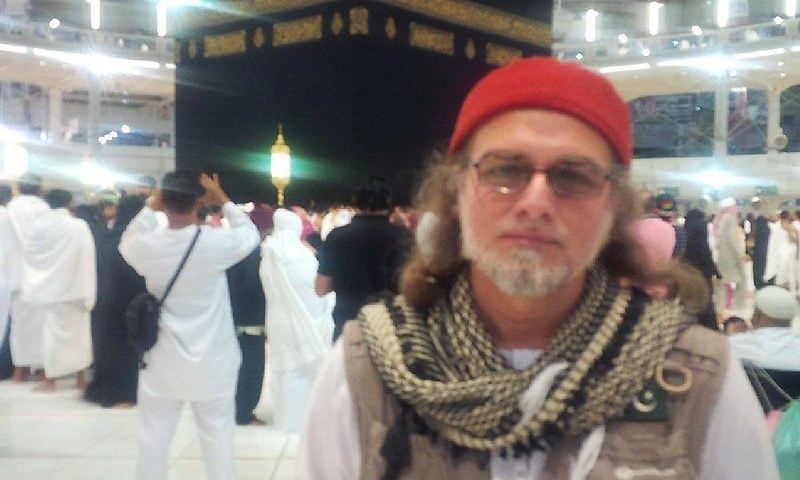 The same fake liberal mafia’s gloating and cheering on this news report is quite disturbing. This is the same fake liberal groups where once respected human rights activist like Asma Jahangir campaigns against the death penalty for ASWJ-LeJ mass murderers and is supported by this mafia!

In this instance, a Pakistani national is once again being stripped of his basic right to dissent against a most repressive regime. Some Fake liberals who claim to be the torch bearers of rights are actually celebrating this human rights violations committed against a Pakistani by Saudi Arabia. Hypocrisy has no bounds.  Not surprisingly, these are the same fake liberal mafia who strive to portray Saudi stooge Nawaz Sharif as “anti establishment”

“Pakistani analyst and commentator Zaid Hamid has been sentenced for eight years in jail and 1,000 lashes by a Saudi court for criticising the Saudi government, according to local media reports. However, the news has not been corroborated by the Pakistani Embassy in Riyadh or the Foreign Office.

Earlier, Hamid was arrested during a private visit to the Kingdom with his wife. He was apparently taken into custody after making statements against the Saudi government.”

Lubp supporter and seasoned commercial liberal critic has summed it up very nicely in these tweets: 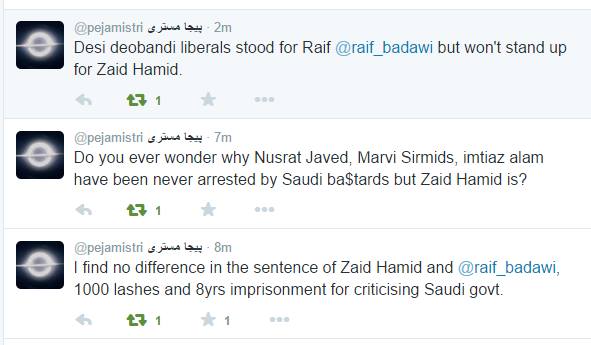