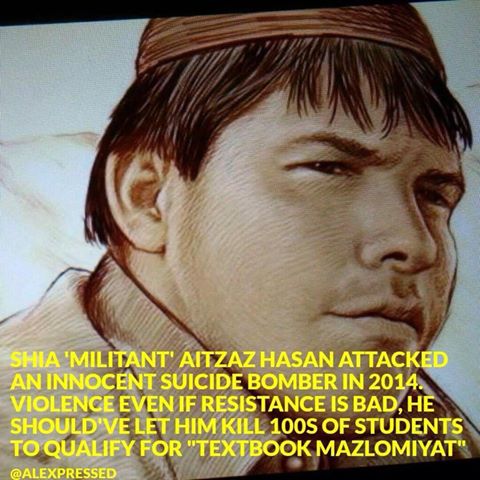 This is a “sectarian” Shia terrorist. A Shia Pashtun school boy who prevented a Deobandi sucide bomber from “making another century of Shia children kills” as ASWJ likes to describe their genocidal campaign. It is Shia terrorists like this Aitzaz Hasan who prove to Pakistan’s liberal intelligensia that what is happening in Pakistan is not a ‪#‎ShiaGenocide‬ but actually a “sectarian conflict” where Aitzaz and the Deobandi suicide bomber present a Moral Equivalence.

Pakistan’s famed “European Liberal” Ejaz Haider wrote an obituary on this “sectarian” Shia boy. In this obituary, Ejaz Haider focussed almost completely on this boy’s weight and relative illiteracy – of course compared to the great “European Liberal” (which is presumptive title used by Ejaz haider himself), we are all illiterates.

In talking about the #ShiaGenocide in Quetta in an earlier column in 2011, Ejaz Haider indirectly blamed the Shia Hazara victims for their own massacre – you see, once or twice in the last decade, these “perfidious” Shias actually ate cake – Iranian cake. Not the processed Uranium. I am talking about the far more dangerous processed Flour cake! Shias ate Iranian Cake and therefore 500 deserved to die. They should have eaten bread.

The Shia love for Iranian Cake and their distrust of sucide bombers makes them an Equal party to this conflict. That is why, every Pakistani Liberal from Professor Hoodbhoy to lawyer Fahad Chaudhary to rights activist Jibran – all have often (not always) described the situation in Pakistan as a “sectarian conflict”

Apparently, the One-sided massacres of Sunnis (Barelvis and Sufis), Shias (12ers, Bohras and Ismailis), Christians and Ahmadis – ALL by Deobandi groups like ASWJ/LeJ, TTP, Jundullah is always described as a “sectarian conflict” proving once again that too Sects makes one Blind.

In the case of Pakistan’s “liberal” intelligensia, it is just not cool to talk about Deo-Nazism.