Home  »  Original Articles   »   As the music burns, along with Jordanian pilots, the U.S. President denies the destruction has roots in Deobandi and Salafi Islam – by Rusty Walker 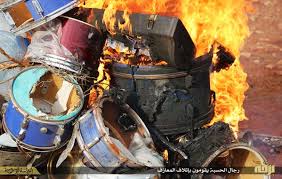 The Islamic State’s Islamic roots, within the Wahhabi Salafi and Deobandi hate cults, are being denied by U.S. President Obama. As the music burns, along with Jordanian pilots, and beheaded Coptic Christians, the term Islamic is absent in Obama discourse.

Music is merely one incendiary target by order of ISIS – who proclaims fellow Muslims, Shias, moderate Sunnis, Sufis, Ahmadis, and Hindus, Christians alike, to all be Kafirs. The U.S. President denies the destruction has its roots in Islam.

ISIS incinerate musical instruments in Libya just as they would burn alive Jordanian pilots. Draconian edicts from ISIS include hatred of music by these Takfiri Salafists – the Gatekeepers of Islam and their claim to identification of real Muslims – terrorists, from ISIS to Taliban. Only one in the long list of destruction, the very existence of Shia, moderate Sunnis, Sufis, Christians, in fact, all non-Salafists should be beheaded, destroyed, or burned as are these musical instruments, see here:

To these Wahhabi clerics, Allah (SWT) must abhor music so much that they are compelled to destroy these precious instruments, as ISIS destroys their self-proclaimed Kafirs. In many areas of KSA, UAE, but also Pakistan- women should not sing, music should not be played, and, of course, kites are also evil. Shias and Ahmadis should not exist, and women can be dismissed to non-existence by the Burqa. And yet, In traditional Islam, Ijtihad or, “independent reasoning” is allowed, that is, interpretation of the Quran, and in doing so more often found the Burqa to be a tribal custom, not a necessary practice.

Sunni Arab Wahhabi/ Salafists and Deobandis do not proscribe to this; therefore they disallow music, insist on the Burqa and wage war on moderate Islam. In this way they are reminiscent of the Taliban who prior to 9/11 high-jacked Afghanistan, and with breathtaking audacity blew up 2000 years of irreplaceable history, by destroying the Buddhas of Baniyan; shot Malala for daring to go to school, and held public stoning in banned soccer stadiums for women who walked the street without a male to accompany her, and more than I care to go on about. ISIS, Taliban, and the network of affiliates are misogynist in their oppression of women and they are inclined to Jihad. They also, masquerade as our allies, in the Middle East: Saudi Arabia, UAE and Yemen. There are religious police in Saudi Arabia that wander through apartments listening for who is playing music. In the morning they are either attacked or worse.

Agendas of ISIS, Deobandis and Salafists are accurately depicted by my friend, and LUBP editor, Ali Abbas Taj, who stated that these terrorists are: “rooted with influence from Saudi religious movement of Muhamamd ibn Abdul Wahab (Wahabi/ AKA Salafi) adherent to Hanbali school of Jurisprudence, which was (and is) the most purist and fundamental school of Islamic Jurisprudence. But the common agenda of Anti-Shia (thus Anti-Iran) was enough for Saudis to support the DII ideology…. It is the Saudis vanguard and influence that brought an ideological change (and non-judicial, uncensored and extremely violent) and created a “Hybrid form of Deobandiism” in Pakistan.”

Ali Taj continues: “Kharijism is a well-documented chastised extra Islamic ultraviolent movements seen periodically in the history of Islam, endorsed by all school of Islamic jurisprudence….Identification that Deobandism is not a faith or jurisprudence but rather a political movement and the followers to identify themselves Hanfi only or Hanfi Sufi.Ne.”

Nevertheless, this is part of the Islamic problem, not condemnation of Islam, but one that needs to be first identified. This is no slight on Islam, anymore than an abortion clinic bombing by a radical far-Right Christian slights Christianity. However, the numbers of Islamist terrorists is exponentially and disproportionately in the millions with regards to radical Islamic extremism and destruction.

President Obama would do better to heed the preferred and accepted distinction in the mainstream press: “Islamic” is a term used to identify orthodox Islam. “Islamist” is a new term used to identify the radical terrorists. To refrain from using the word “Islam,” out of fear that it may be misconstrued, is to patronize the audience, miss an opportunity for clarity, and obfuscate truth – It is Islamist terrorism that is the common global enemy at the present, ISIS currently at the forefront, and Boko Haram, Taliban and al Qaeda no less. The enemy is not a generic term: “Religious Extremists,” which pretends to include all religions, and in doing so, diminishes the real threat.

These Islamic fundamentalists claim to be a school of Islam, but, even if “political Islam,” they are associated with the Islamic problem. Instead egregious acts are mistakenly and intentionally misconstrued by Obama as coming from “zealots” and he receives applause when he authoritatively states, “this is not Islam.” This is a factual error. It is Islam.

It is radical Islam, no different in the horrors perpetrated in Paris or Libya, or Syria or Iraq, or FATA in Pakistan, Boko Haram in African countries, these Salafist Jihadists are all related: Deobandi terrorists organizations, the Sipah Sahabah Pakistan/SSP/ASWJ, Ahle Sunnat Waljamat, and Haqqani Network involved in genocidal assassinations of Shia, supported by ruthless Taliban sympathizers who are elements within the ISI the security agency. The elements within Frontier Corps (and Frontier Constabulary) in the Tribal Areas, FATA, KP, Waziristan and Peshawar, who turned their backs on Shias pulled out of busses and beheaded alive. All made possible by negligence of the Pakistani government from negligence of PPP to Imran Khan’s PTI sympathies with Taliban, and PML-N Taliban-deals, and political absenteeism, and the past General Kayani’s Pakistani Army. All of whom have blood on their hands for ignoring the genocidal intent that goes on today, of Shia in Pakistan and historically for decades. The lack of a strategy in eradicating ISIS is a mirror of past Islamist terrorism left unchecked. This is Islam. It is not orthodox Islam, it is not Sunni Islam, but it is the bloodletting face of radical Islam happening from Pakistan to Africa from Syria to Iraq, to Bali and India; certainly not confined to these regions.

ISIS is Islam, as is al Qaeda, and Boko Haram (“Western education is forbidden”), (Jama’atu Ahlis Sunna Lidda’Awati Wal-Jihad (“Group of the People of Sunnah for Preaching and Jihad”); as is Taliban. All these terrorist groups are “Islamist terrorist movements” whether based in the Middle East, South Asia, Africa, or inspired Jihadists in the U.S.

Obama does a disservice to Islam by not articulating those specifics, and the differences in Islamic schools of thought so that clarity of purpose and solidarity against a single enemy may be identified, for the benefit of Muslims and non-Muslims alike.

For example, there are 4 million Saudi Salafis, who follow the Muhammad ibn Abd-al-Wahhab. While the claim is that this is less than 0.5 percent of the world’s 1.9 billion Muslims, it nevertheless approaches 10 million. And, this number does not reflect those millions under the radar, that sympathize with ISIS goal of a Caliphate and the Sharia Law of Wahhabis, such as Boko Harum and Taliban, and radical Sunnis in the Iraq, Syria, Yemen, the Stans, parts of China, Malaysia, Indonesia, Pakistan and Turkey.

Obama’s reluctance to admit Islamic terrorism, could be taken as attempted appeasement to terrorists. Terrorists are emboldened. Obama is dishonest in not identifying the recent ISIS victims as Christians, but rather as “Egyptian citizens,” instead of the intentional targeting and beheading of 21 Egyptian Coptic Christians specifically for propaganda and ISIS increasing recruitment. Meanwhile the Wall Street Journal cover the reality of the threat using proper terminology.

To his credit, Egyptian President Abdel Fattah Al Sisi called for UN-Backed International Coalition to Intervene in Libya and urged the UN support to confront “Islamic State” in Libya against “radical’ Islamist groups.” This is dealing with real names of our common enemies.

“Egyptian Foreign Ministry’s chief spokesman said Egypt was seeking support for the view that ‘less radical and more radical’ Islamist groups can’t be differentiated. “They are all the same. They are coordinating on the ground between them. They share the same ideology that was crystallized by the creation of the terrorist group in 1928,” he added, referring to the year the Muslim Brotherhood was created.”

President Obama by contrast, insists on leaving out the name “Islam,” and yet when criticizing Christianity, he makes it clear “Christians need to get off their high-horse.” This is a Strawman argument that in fact does not exist. There is no concerted Christian effort in the U.S. to blame Islam for terrorism. All American newspapers, namely the Washington Post, New York Times, and national TV broadcasts unanimously blame radical Islamists- not Islam.

Yet Obama avoids the term. Not articulating the differences in Islamic jurisprudence, and/or “schools of thought” is intellectual dishonesty. The brutal tactics in Iraq and Syria are by Islamist Jihadists. The Saudi Arabian draconian laws are perpetrated by “Islamic” religious police – the Mutaween– who are responsible for the enforcement of Sharia in many Muslim-majority countries.

For Obama to drag out the Christian crusades of centuries ago, to scold American Christians is not only a sophomoric distraction, most historians have lodged complaints of inaccuracies. And yet, he refrains from mentioning anything Islamic. This should be insulting to the intelligence of the enlightened global public and the Islamic Ummah. He referred to the Paris Islamist targeted killings of Jews in a Kosher café and attacking journalists for publicizing cartoons of Mohammed (PBUH) as “zealots who randomly shoot a bunch of folks at a deli in Paris.” Really!!?

The random murders by a bunch of “zealots.” Really? U.S. Democrat, and pro-Obama idealists, do they really believe that? If so, they are caught up in the culture of personality, no different than totalitarian nations who govern thought-processes by telling a lie or conspiracy theory often enough that the public believes it. The same conspiracy enthusiasts that insist that the CIA and Israel are behind every evil mishap in the world. In this folly, we allow ourselves to be sufficiently deceived to encourage ISIS to grow and enlist new recruits that would kill me, as an American, no more swiftly than you, as a Muslim, were you not the “pure” Wahhabi/Salafist Muslim. It is Salafist/Wahhabism that has high-jacked the Islamic religion and defines Kafirs, not you and me. Remain ignorant to these truths to your peril.