Home  »  Featured • Original Articles   »   Is there a moderate Deobandi? A comment on “Deobandi coalition in the making by Aoun Sahi” – by Abdul Nishapuri 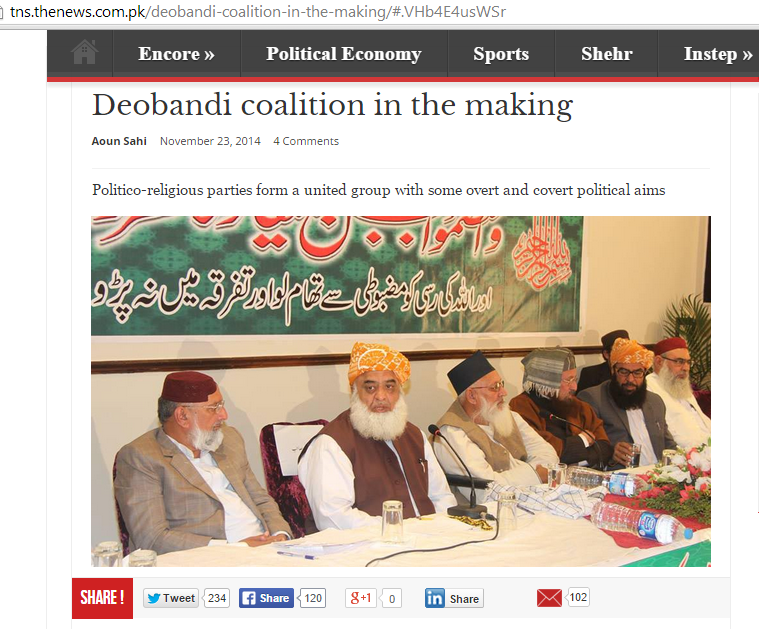 LUBP Note: This article by Aoun Sahi published in The News on Sunday (23 Nov 2014, copy-pasted below) is a clear evidence of the impact made by LUBP and other Sunni and Shia volunteers in highlighting the almost exclusive dimension of Deobandi takfiri terrorism against Sunni, Sufi, Shia, Christian and other communities of Pakistan. From ASWJ-SSP to LeJ, TTP to Jaish-e-Muhammad, Jundallah to Jaish-ul-Adl, Ahrar to Talibn, Deobandi terrorist groups continue to massacre innocent Pakistani civilians and security personnel.

The TNS article, despite its merits, has a few problems particularly when it recylces Amir Rana’s problematic discourse which fails to explain why mainstream Deobandi groups such as JUI-F and Wafaq ul Madaris have decided to publicly ally with ASWJ (read LeJ) terrorists. The very suggestion that ASWJ and LeJ are two separate entities is problematic when Malik Ishaq, the founder head of LeJ, also happens to be the Vice President of ASWJ and the Shia Kafir slogans are regularly chanted in ASWJ’s public rallies.

This new union of Deobandi clerics and outfits has clearly demonstrated that there are no moderate Deobandi clerics and groups, and that all Deobandi leaders and clerics are now openly aligned with the takfiri Deobandi terroirsts of ASWJ-LeJ. In fact a few Deobandi clerics killed or attacked by Deobandi militants too are far from being described as a moderate. For example, there is not one, REPEAT one, Deobandi cleric who has issued a fatwa that Shias and Sunni Barelvis/Sufis are as good and legitimate Muslims as are Deobandis and Wahhabis.

In other words, the notion of moderate Deobandi is no more than a myth. For example, refer to Maulana Tariq Jamil’s video in which he says that after being educated by ASWJ’s Ali Sher Haideri, he is now of the opinion that anyone who insults any Sahabi is a Kafir and that modern day rawafiz (a derogatory term for Shias) are kafir (infidels).

Realistically speaking, a moderate Deobandi is one who has not yet killed a Sunni, Sufi or Shia but may do so in the future. This definition also includes those moderate Deobandis who continue to act as silent bystanders or activley deny, justify or obfuscate Deobandi terrorism against Sunni, Shia and other groups.

Now, there is only one option left for moderate Deobandis. They must openly renounce Deobandism and revert to original peaceful Sunni Islam of Imam Abu Hanifa. Instead of Deobandi, they should call themselves Sunni or Hanafi and must not at all identify with, promote or defend Deobandism. Deobandism as an identity has as bleak a future as Wahhabism or Nazism.

Here’s a copy-paste of the TNS article:

The meeting was convened by Ataul Momin Bukhari son of Attaullah Shah Bukhari, who heads Majlis-i-Ahrar-i-Islam. The meeting formed a supreme council headed by Maulana Dr Abdul Razzaq Iskander, head of Jamia Uloom-i-Islamia, Binori Town, Karachi with heads of all 21 organisations as members.

The supreme council is the most powerful body of the new umbrella group and will formulate policies for a collective struggle of Deobandi organisations. A coordination committee with a mandate for implementing the policies formulated by the supreme council, has also been set up.
The conference has come up with a seven point agenda ranging from keeping intact the Islamic identity of Pakistan to getting rid of political and economic influence of the US and other imperial powers to purifying syllabus and stopping sectarian difference from turning into clashes, and coordination among leadership of different sects to achieve these goals.
According to insiders, the main agenda of the conference was to strengthen unity among different Deobandi groups. Militancy, its association with Deobandism and how to get out of the situation were discussed at length at the conference. The meeting also discussed the political future of Deobandi organisations.

This is not the first effort to bring Deobandi organisations on a single platform. In the past several efforts have been made, especially after the US attack on Afghanistan after 9/11 but all failed to achieve the target of uniting different organisations.

The most significant part of this group is bringing Maulana Fazlur Rehman and Maulana Ludhianvi on one platform. Maulana Fazlur Rehman sat with the leadership of ASWJ (SSP) after over a decade. Both organisations were at odds since the days of former chief of SSP Maulana Azam Tariq and even contested elections against each other. ASWJ blames JUI-F for the defeat of Aurangzeb Farooqi in Karachi on a provincial assembly seat in 2013 elections. Farooqi was defeated with a thin margin of 250 votes by the MQM candidate while the JUI-F candidate in the constituency got 950 votes.

The most significant part of this group is bringing Maulana Fazlur Rehman and Maulana Ludhianvi on one platform.

Amir Rana, head of Islamabad-based Pak Institute of Peace Studies and security analyst, says the Deobandi establishment, whether political or madrassa-based, has been feeling threatened by the militant organisations belonging to the same school of thought. “Even sectarian organisations have been challenging their parent organisations,” he says, adding that militancy and survival are the two basic challenges being faced by traditional Deobandi power structure in Pakistan.

“Deobandism has seen large scale expansion during the last few decades. Thousands of new madaris have been set up. New people have joined,” says Rana. He thinks that since the initiative has not come from the larger organisations like JUI-F, there are less chances of its success.
His view is that a majority of Deobandi organisations are pro-establishment and “we need to see how they engage with the establishment after this coalition.”

He says the largest challenge to Deobandi school of thought in Pakistan is from within. “At present, no Barelvi or Shia organisation is in position to challenge them. They have threats from the militant mindset within the Deobandi organisations and youth, and that was the main reason they had gathered.”

Tahirul Qadri and the emergence of his party as the most organised Barelvi entity have also been seen as a reason for this Deobandi get together.
Sources in different Deobandi organisations say the core agenda of the conference was to stop the split of Deobandi vote in the next elections. Whether it ends up as an electoral alliance or not, the candidates of Deobandi organisations would not contest elections against each other, sources say.

The move to establish such a coalition is said to have started right after the 2013 general elections. “For a change, it was Maulana Ludhianvi who got in touch with different organisations with a proposal to form such a coalition,” an insider tells TNS, adding that the leadership of major Deobandi organisations met in Saudi Arabia after Hajj this year where they took this decision.

“In the 2013 elections, ASWJ failed to get a single seat in parliament but then it got over 3,70,000 votes and became the second largest Deobandi political party after JUI-F which got around 1.5 million votes,” he says, adding that it was not possible for JUI-F to neglect ASWJ after 2013 elections.

Tagging of militancy with Deobandis is one of the major issues.

JUI-F has always been seen as the political face of Deobandi movement in Pakistan while ASWJ (read SSP) is its sectarian face with a strong anti-Shia agenda. It was the former head of SSP, Maulana Azam Tariq, who challenged JUI-F politically and denied accepting its political role.

Maulana Yunus Qasmi, senior leader of ASWJ and political secretary of Maulana Ludhianvi, says that JUI-F in the past used to make political coalitions with Shia political parties which was a huge blow to their cause. “Both parties used to create problems for each other but now there is a strong realisation that it needs to end,” he says.

The ASWJ has suggested in the conference that they have no problem in accepting JUI-F as the political face of Deoband in Pakistan but they “should also be allowed to work on Namoos-e-Sihaba and Ahle Bait”.
Deobandism has been tagged with terrorism in Pakistan. All jihadi organisations except Jamaat ud Dawa have emerged from the Deobandi school of thought in Pakistan. An overwhelming majority of leadership and foot soldiers of Pakistani Taliban including the Punjabi Taliban belong to this school of thought. The suicide attacks on Maulana Fazlur Rehman and some other prominent Deobandi leaders including Maulana Shaerani have forced them to sit on one platform and try to mainstream the sectarian and militant elements.

Hafiz Hussain Ahmed, secretary information JUI-F who played a very active role in making the meeting a success, says the coalition is still in its early stages and things would become clear in the next few weeks. “Tagging of militancy with Deobandis is one of the major issues. We do not separate our religion from politics. We have not discussed making it a political coalition but it can end up as political one.”

Ahmed says JUI-F would try to connect the coalition with politico-religious parties of different sects including Shias. When asked that ASWJ issued a decree two years back that any political or social coalition with Shia organisations is against the philosophy of Islam, he just laughs it off.
“Their elders were all part of IJI on a platform of which 78 Shia candidates were given tickets. We will not take the lead from them on political matters,” he says, adding the coalition is against sectarianism in the country. “It would not mainstream ASWJ agenda but instead bring them to mainstream politics,” he concludes. 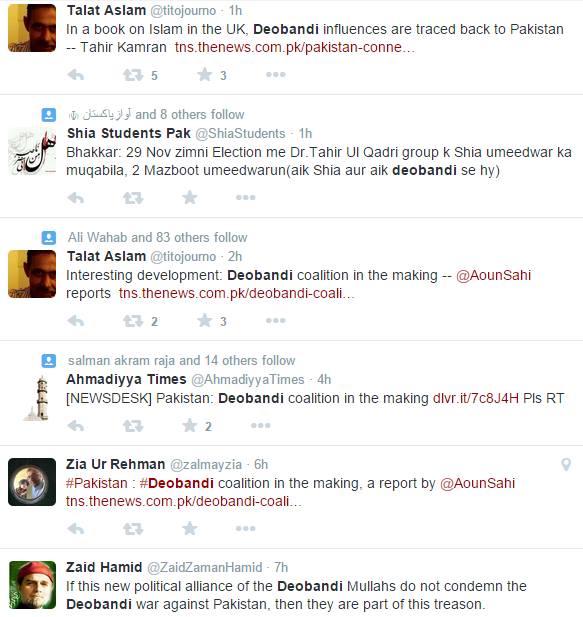 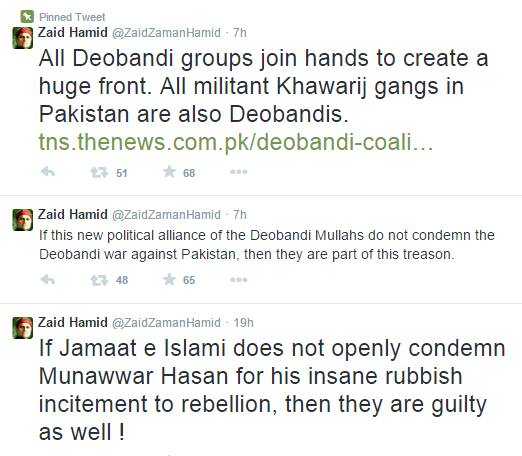