Sartaj Aziz is not an ordinary politician. He has the official title of “Advisor to Prime Minister on National Security and Foreign Affairs”. He is Pakistan’s de facto foreign minister. He has a close relationship with Prime Minister Nawaz Sharif and is known to be his closest confidante after Shahbaz Sharif. Thus, when in an interview with the BBC he says that his government will not take action against the militants who do not pose threat to Pakistan, he maps the policy of the current government. Aziz also favorably spoke about the Haqqani Taliban, which is known to be pro-Pakistan and anti-Afghanistan Taliban network

The Aziz statement has been so surprising, even outrageous, that even an ever-docile Senate of Pakistan has condemned it (Read: http://www.dawn.com/news/1145540/sartaj-censured-in-senate-over-controversial-interview).

The Aziz policy statement has gone largely unnoticed in the Pakistan media, which has been pro-Taliban. The statement should have provided the media to hold a healthy debate on Pakistan’s stance vis-à-vis Daish. But it seems that everyone knows what is going to happen in Pakistan I the coming months. Watching the Aziz interview with the BBC (below) makes it clear that “We” not only trained and armed the Takfiri-Deobandi terrorists, “We” will continue to support them. At the very least, this is a confession of crime on the part of Aziz. After this, there is no room for doubt about the criminality of the Sharif government and its intention regarding the 95 percent of Pakistanis who do not subscribe to the Takfiri-Deobandi ideology of 5 percent Pakistanis. Following are my views on Sartaj Aziz’s statement:

The Aziz statement in my opinion lays foundations for bringing the Takfiri-Deobandis like the banned Ahle Sunnat Jamat/Sipah-e-Sahaba Pakistan (ASWJ/SSP) into the mainstream of Pakistan’s politics. It is important to note that despite being banned officially, the ASWJ/SSP was allowed to contest elections and make alliances with no other than Nawaz Sharif’s Pakistan Muslim League (PML-N). The media and the Election Commission of Pakistan (ECP) with a wink from pro-Deobandi rogue elements in Pakistan Army and the Supreme Court, the two most powerful institutions, kept quiet about the unlawful participation of the ASWJ/SSP in the elections. No one found fault with the PML-N for making alliance with the Takfiri-Deobandi ASWJ/SSP.

However, the likes of LUBP and Roshni.com have always been critical of the ASWJ/SSP-PML-N alliance. Whatever the facts on the ground, the ASWL/SSP have never been able to claim legitimacy. Thus, in order to counter all the allegations of illegitimacy, the Nawaz Sharif government has decided to withdraw the ban from the ASWJ/SSP Th PML-N. This is how things are unfolding now: First, the government released Allama Naqvi of the so-called Shia Sipa-e-Muhammad. Naqvi was in detention for 18 long years without a single charge being brought against him. Despite all its efforts, the government could not prove the existence of Sipa-e-Muhammad.

The next step is to lift the ban on the Shia Tehrik-e-Jafria Pakistan (TJP). The government has actually lifted the banned, which has only symbolic value because the TJP does ot exist anymore outside the person of Allama Sajid Naqvi. However, unbanning of TJP was actually a precursor for something more sinister. Since the TJP and the ASWJ/SSP were banned at th same time (by General Musharraf), the next ‘natural’ step is to lift the ban on th ASWJ/SSP, the Deobandi terrorist outfit that continues to massacre Sunni Sufis, Shias and Christians on a regular basis. 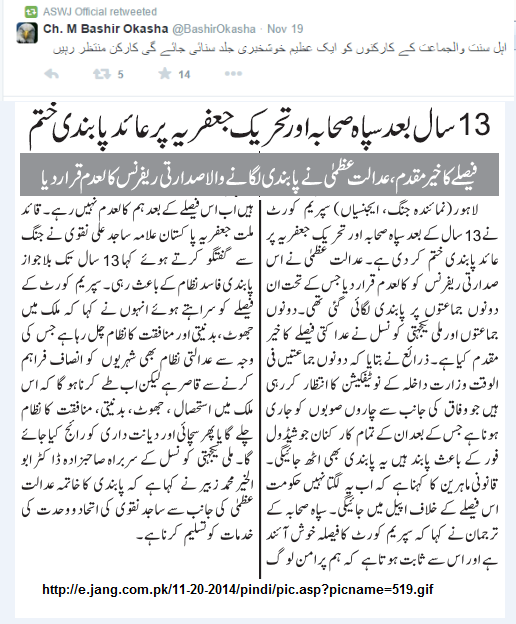 Now the question is: Why will the government lift the ban on the ASWJ/SSP at this moment?

The answer probably is that Imran Khan has offered a viable opposition to the PML-N. In response to the Imran-Qadri dharnas in Islamabad, it was only the ASWJ/SSP, which took out processions in favor of Nawaz Sharif and his government. As detailed by Dr Sarif Mazari in her press conference (see the video above), Nawaz Sharif bribed Osama bin Laden to remove Benazir from her position as Pakistan’s prime minister. It can safely be said that Sharif wanted Osama bin Laden to kill her because that was all he was capable of. Dr Mazari also gives evidence of Sharif’s alliances with various Takfiri-Deobandi outfits. Now that the Sharif government is making formal and legalized alliance with the Takfiri-Deobandi ASWJ/SSP, it must not be forgotten that this outfit has enormous supply of suicide bombers and assassins. It has immense street power too thanks to its backers like Saudi Arabia, the Supreme Court (himself a Deobandi, Justice Iftikhar Chaudhry has family terms with Takfiri-Deobandis), and the pro-Deobandi rogue section of Pakistan Army/ISI. It may be relevant to remember here that in the previous elections, the PPP and the ANP did not hold a single political rally because the Takfiri-Deobandi Taliban threatened to send suicide bombers. On the contrary, the PML-N was given a free hand to hold public rallies in which the Takfiri-Deobandi presence was very visible. In te coming elections, the Takfiri-Deobandi outfits will be an asset to the PML-N. 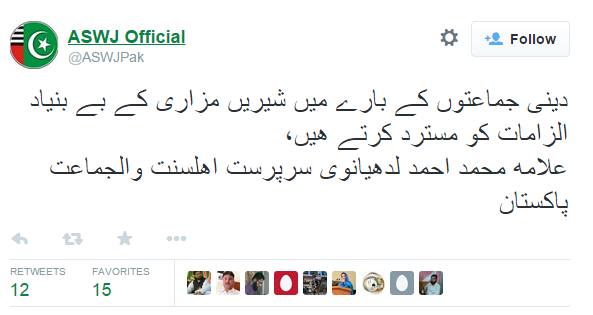 The Aziz statement should also be seen in the context of the spread of Daish in Pakistan. Recently, members of the ASWJ/SSP were arrested writing pro-Daish graffiti in Multan. The Daish flag has been hosted in different parts of Pakistan including Lahore which is the power base of the Sharif brothers. Various Takfiri-Deobandi groups have pledged their allegiance to Daish. If the Takfiri-Deobandis and the Daish militants are with you, you have already won every battle including elections.

Thus, in my opinion, the PML-N is making preparations or the coming elections, which in Pakistan’s context can be called anytime—in six months’ time to four years. Those who say that Nawaz Sharif cannot make alliance with Daish because the House of Saud, the benefactor of the Sharif brothers, will be angry have no knowledge of how politics works in the Takfiri context of Pakistan and the Middle East. Daish is as much a Saudi idea as was the Mujahideen who fought the anti-Soviet war. I hope that time will tell how Daish was funded by the Saudis. However, at this point I can say with confidence that given the financial and moral hold of Saudi Arabia on Pakistan’s Takfiri-Deobandi groups, it is not possible for them to vow allegiance to Daish without Saudi blessing. Thus, ISIS-Saudi-PML alliance is going to have more Shias, Sunni Sufis, Ahmadis, Christians and Hindus killed in Pakistan.

The following will help the reader understand the Saudi alliance with the Takfiri-Deobandis and how the latter are serving the former’s cause, which is what Daish is doing too: 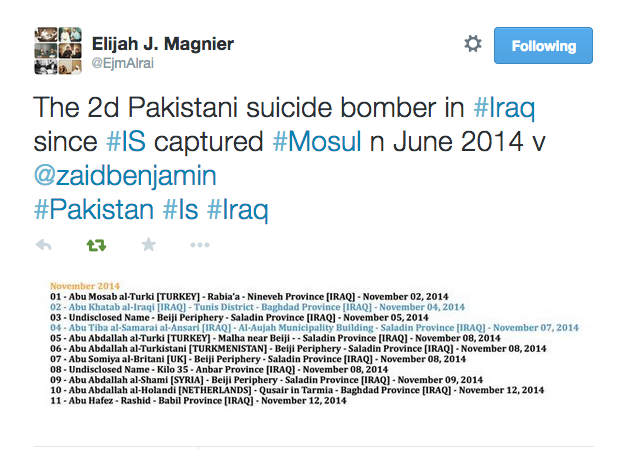 One response to “Sartaj Aziz’s statement on ‘Pakistan-friendly’ militants, not-hidden ISIS factor, and the coming election – by Laleen Ahmad”