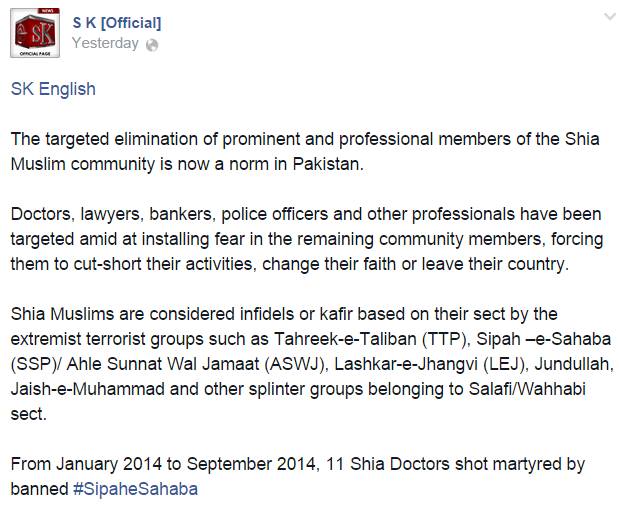 The above status update by the Shia Killing (SK) facebook page is yet another example of deliberate obfuscation and dishonesty by a facebook page which was initially set up to spread awareness about Shia genocide in Pakistan. Even a blind person knows that SSP, LeJ, ASWJ, TTP, Jundullah are Deobandi outfits – in fact different aliases of the same Deobandi takfiri militants with shared membership and blurry boundaries. Shia Killing or SK claims that these are Salafis, i.e., Ahle Hadith or Wahhabis. This is clearly a case of how a Shia rights site is misleading the Shia community and human rights organizations.

1. The Salafi or Wahabi (Ahl-e-Hadith) jihadis of Lashker-e-Taiba (new name Jamaat-ud-Dawa) are completely under the ISI’s control. In the current jihadi landscape, they are not involved in any act of terror against Pakistan Army or within the state of Pakistan. There is no known incident of attacks on Pakistani Shias by the LeT-JuD or other Ahle Hadith/Salafis.

2.  The Deobandi jihadis of Taliban (most if not all of them) are no longer controlled by the ISI. Because of their ideological affiliation with the Afghan Taliban (of Mullah Omar), they have taken a much tougher and violent stance against the state of Pakistan and its armed forces, and are involved in most acts of terror within the country.

3.  The Punjabi Taliban (dominated by terrorists of Sipah-e-Sahaba aka Lashkar-e-Jhangavi – a sectarian Deobandi organisation) are now ideological leaders and mentors of the Taliban militants in Pakistan (known as Tehreek-e-Taliban Pakistan (TTP).

4. Taliban in general and the Punjabi Taliban (Sipah-e-Sahaba) in particular are currently very much annoyed with Hafiz Muhammad Saeed and his Lashkar-e-Taiba because of the latter’s persistence in tightly following the ISI’s commandments. Therefore, Hafiz Saeed’s life is currently under threat from the Deobandi terrorists of Punjabi Taliban / Sipah-e-Sahaba. Here the ideological differences between Deobandis and Salafis seem to further compound their political differences in the current jihadi landscape in Pakistan.

5. Takfiri Deobandis (TTP, Sipah-e-Sahab) consider it legitimate to attack all those Deobandis who are opposed to the TTP’s violent anti-military establishment agenda and tactics. Attacks on Maulana Hassan Jan  (a Deobandi scholar from Peshawar) and Maulana Fazlur Rehman (a pro-establishment religio-political leader) are an example of this phenomenon.

At the same time, SK Facebook page is shamelessly publishing and promoting pictures of PPP leaders Bilawal Zardari, Asfi Zardari, Shehla Raza, presenting them as heroes of human rights, with their shallow condemnation of Shia genocide. SK is shamelessly hiding the fact that none else than the PPP government of Sindh is currently presiding over the largest numbers of Shia killings in Karachi without any action at all against the Auragnzeb Farooqi Deobandi ASWJ Gang responsible for attacks on Shias and Sunni Sufis/Barelvis.

It seeems that more than Shias of Imam Hussain (a.s.), SK is acting as apoloigsts and toadies of PPP and MQM in Karachi. These toadies are selling the blood of Shias, obfuscating the real identity of killers (Deobandi terrorists) and the government responsinble (PPP govt in Sindh).

In any case, it is now evidence that SK is either compromised or incompetent. It has no right to sell Shia blood and obfuscate their genocide by Deobandi terrorists.

SK must clarify who is backing them and what is their agenda. Are they PPP apologists, MQM toadies, or is there a Deobandi group pressurizing them to refrain from identifying the Shia killers. In either case, the discourse of SK is clearly compromised and untrustworthy. 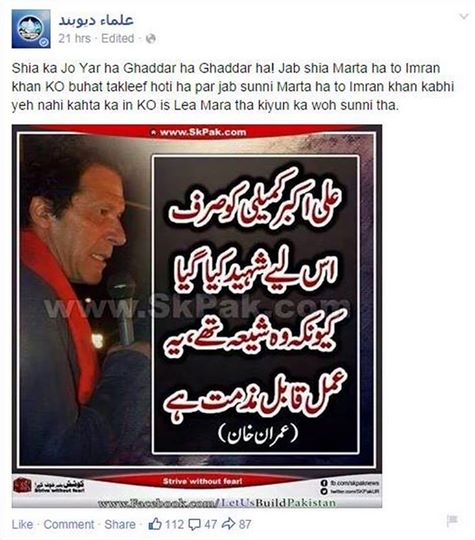