On June 17, 2014, the Punjab police under CM Shahbaz Sharif and Rana Sanaullah carried out a brutal crackdown of PAT activists resulting in over 100 men and women being killed and critically injured. In response to this brutal act, the response of Pakistan’s “tinsel liberati” and selective human rights activists has been abysmal.

Here are some samplesSectarian: Dr. Tahir ul Qadri’s PAT movement has crystallized some important facts. By highlighting that Pakistan’s Sunnis (Barelvis/Sufis), Shias & Christians exist in harmony and share common ideals, Tahir ul Qadri has dealt a major blow to the false Shia-Sunni/Iran-Saudi sectarian/proxy war lies that has been propagated by Pakistan’s “Tinsel Liberati”. By evoking the low for the Holy Prophet and his family, Tahir ul Qadri has also exposed the sectarian bigotry of Pakistan’s so-called “liberal/secular” champions where Murtaza Solangi and hardline Deobandi Taliban leader, Fazlu Rehman use exactly the same sectarian digs “Sham-e-Ghariban” to mock the PAT protestors. 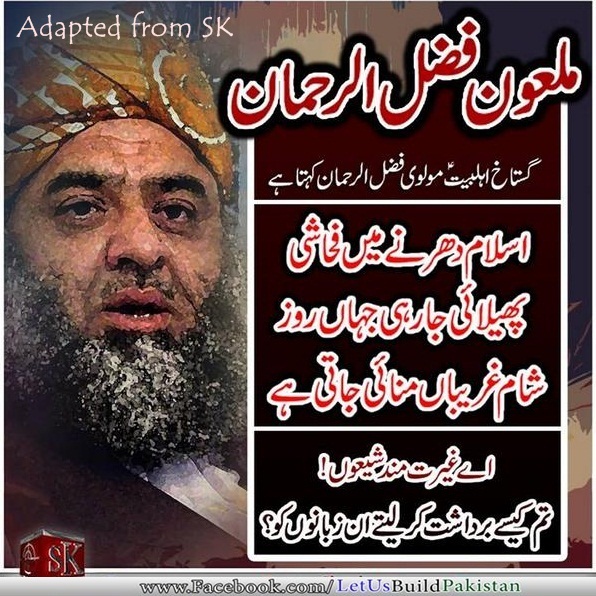 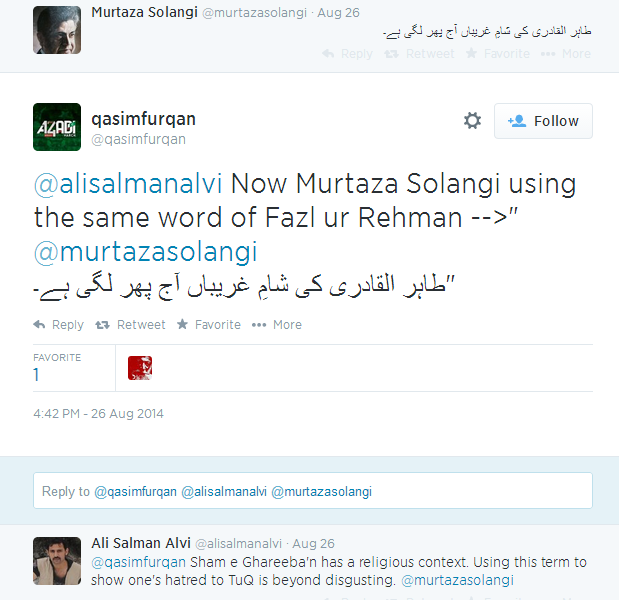 Sham-e-Ghariban is part of the solemn Ashura commemorations that are widely observed and shared by Pakistan’s Sunni Barelvi, Sufi, Shia, Hindu and Transgender communities. Takfiri Deobandis and Salafis who venerate mass murdering tyrants like Yazeed hate and abhor the cultural commemoration of Sham-e-Ghariban, This is the event when the Holy Prophet’s family women and children were attacked and enslaved by the Ommayad army. Using Sham-e-Ghariban as a term of mockery and abuse shows the heartlessness and insensitivity of those using it as well as the common alliance between Takfiri Deobandi elements and pseudo liberals/seculars.Some of these elitest and selective human rights activists of Pakistan have shown a soft corner to Deobandi extremism and often adopt false neutral positions where victims and perpetrators are lumped in same category. 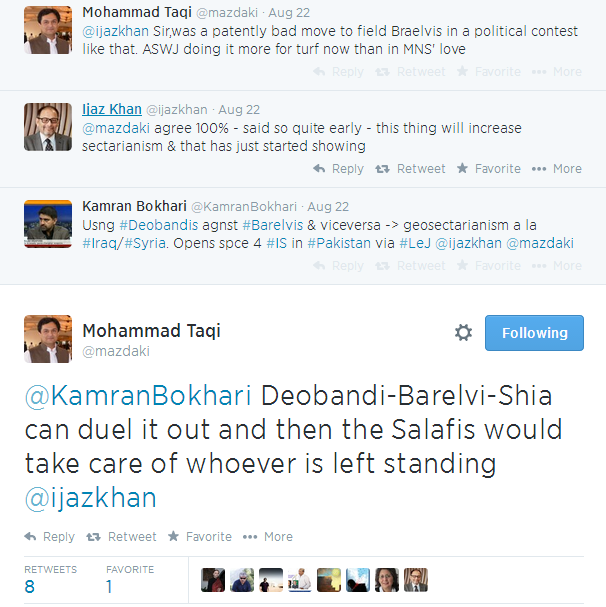 As per the logic of this twitter conversation, the Pakistan Awami Tehreek under Dr. Tahir ul Qadri must not protest the brutal massacre of their workers because it puts them on an equal footing as those Deobandi terrorist organizations that have claimed 70,000 Pakistani lives! And further, as per the logic of this thread, ISIS/ASWJ were inactive before the PAT protests started two weeks ago and the 70,000 victims of Deobandi terrorism are therefore just a figment of our imagination! Or that the number will go up even more if the victims protest.

If this is the state of Pakistan’s “tinsel liberati” , God help us all.

It is deeply disappointing to see the False Neutral positions adopted by Dr. Taqi and Arif Jamal on social media. To lump the victims of State terrorism (Sunni Barelvis, Shias) with their perpetrators or to misrepresent State/PML N backed Deobandi & Salafi terrorist groups at par with their victims is sheer dishonesty and indicative of bias and prejudice. All religious groups and sects have extremists. However to make a false equivalence between the Deobandi perpetrators (ASWJ-LeJ, JeM, Jundullah, Taliban) & Salafi (LeT/JuD) and their Sunni Barelvi, Sufi, Shia, Hindu, Christian, Ahmadi, Sikh victims is sheer dishonesty.

It is disappointing  to see individuals like Dr. Taqi and Arif Jamal reduced to such prejudice in their blind allegiance to the murderous and rigged regime of PML N.  Both individuals should take note that in their current visceral response to the PTI and PAT protests, they are close to the sentiments of ASWJ-LeJ and LeT.

Finally, there are those like Nusrat Javeed who presents himself as a liberal journalist.  To see his shocking homophobic attacks against an Election Commission whistle blower shows the lows to which pro PML N journalists have sunk to.  In this collection of tweets, Nusrat Javeed comes across as not just homophobic but dangerous.  Bully tactics and wishing assaults on others are common tactics of PML N thugs like Gullu Butt and Pomi Butt and Billu Butt. Now we have “anti-establishment” “liberal” journalist whose public pronouncements expose him as nothing more than a PML N paid thug. 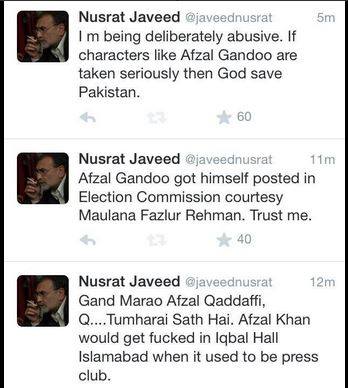