Due to their sectarian blinders and Pro Deobandi bias, Pakistan’s elite have grossly underestimated the genuine grievances and the underlying public support for the marches of Pakistan Awami Tehreek and Pakistan Tehreek Insaf.  The last week has seen an alliance between the hardline Far Right Deobandi-Wahabi Islamofascists and between Pakistan’s elitest leftists and civil society against the moderate-centrists represented by PAT and PTI. 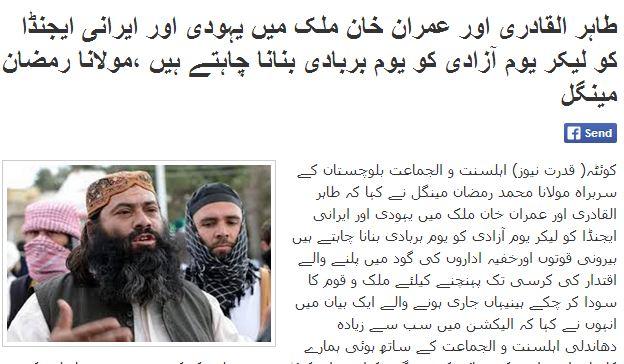 Ramzan Mengal, Balochistan Leader of Banned terrorist outfit, ASWJ-LeJ maligning the PAT-PTI rally as a “Persian and Jewish Conspiracy”. And this same Ramzan Mengal was fervently defended by Pakistan’s Elitest Liberals when he lead the funeral prayers of Khair Bux Marri 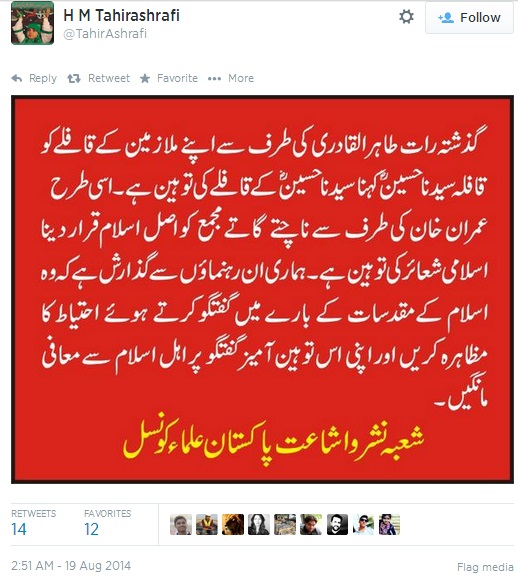 Deobandi Supremacist Tahir Ashrafi of the Pakistan Ulema Council aka Deobandi Ulema Council providing his sectarian bias against the PAT-PTI march. When PAT-PTI highlighted the tyrannical role of Yazid Bin Muawiya, the murderer of the Holy Prophet’s family, they cleared touched a cord amongst those who venerate Yazid.

The PAT-PTI alliance represents the moderate center of Pakistan. It represent the rural classes that have been abandoned by PPP as well as the urban middle class that is being crushed by the economic mismanaged and crony capitalism of PML N. The PAT-PTI alliance also represents the longstanding alliance between the country’s mainstream and Sufi-inclined Sunni Barelvis and the Shias as well as the Christains. All three faith communities have been suffering a near genocide situation in Pakistan by the PML N backed Deobandi terrorists groups like ASWJ-LeJ and TTP. 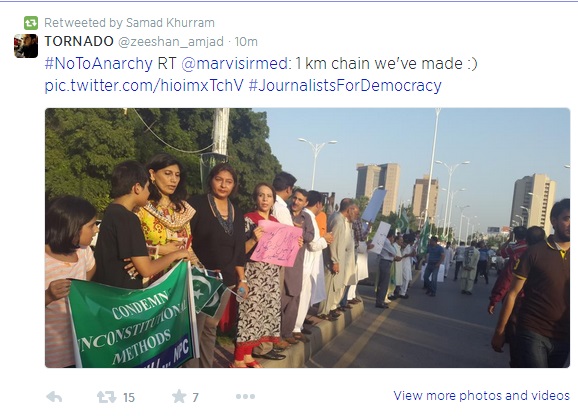 Where were these rights activists when the unarmed women of Pakistan Awami Tehreek were being shot dead in their face by the Gullu Butt thugs of PML N? Did they protest against the Model Town Massacre or is their agenda of human rights subservient to PML N patronage

The PML N leadership murdered PAT activists because Dr. Tahir ul Qadri had taken the lead in supporting the military operation against the Taliban – the same operation that was opposed and blocked for months by the Pro Taliban PML N government.

Subsequent PAT protests were brutally suppressed and blockaded by the PML N government in Lahore. Once again, Pakistan’s famed human rights activists who were condemning Israel’s blockade of Gaza maintained a criminal silence on the blockade of PAT workers and leaders in their own backyard in Lahore.

While all the political parties, including PPP complained of systematic rigging in the last elections, only PTI took up the cudgels to do something to rectify this crime against democracy. The reactionary lawyers movement had already subverted Pakistan’s Judiciary making it into the legal protectors for the corrupt PML N and their extremist Deobandi allies LeJ.

The PPP is on the verge of being irrelevant to Pakistan’s future politics and the response of its leadership has been to become the B-team of the PML N.

That is why today, PTI is the only true political opposition to the PML N.  ANP under the part-time leadership of Asfandiyar Wali is on the same path of irrelevancy as the PPP.  The MQM cannot get over the electoral dent that PTI gave it in the last election. PTI has taken the biggest risk in the recent anti-government protests and now is likely to reap the highest awards in terms of increasingly its electoral clout in a future election.

In the last three years, PTI has gone from a marginal Taliban apologist party to a mass populist party with roots all over Pakistan. It has been at the forefront in condemning Shia Genocide and unlike even Bilawal, has spoken out against the Deobandi terrorist organization, the LeJ.

Unlike the Taliban facilitating PML N, PTI has somewhat distanced itself from its former problematic stance vis a vis the Taliban and today, it stands united with the Sunni-Shia-Christain alliance lead by the anti-Taliban Tahir ul Qadri.

Pakistan’s liberal and leftists elites are too compromised both due to the patronage of PML N and due to the dominance of the Takfiri mindset within urban Pakistan. To see their blind support for a Saudi protégé who has matured under the patronage of Pakistan’s worst military dictator, General Zia ul Haq is a sad sight. The PML N assaulted the Supreme Court in the 1990s and subverted the Judiciary with their corrupt patronage of the lawyers movement.

Some of these PML N sponsored liberals, aka Nawaz-iafta liberals,  have made some pathetic attempts to paint the Saudi protege and Taliban facilitator, PM Nawaz Sharif, as “anti-establishment“.  The truth is that due to his obsession with power, his support for the Taliban and the delay he caused to the army operation against his beloved Taliban, Nawaz Sharif has actually ceeded civilian space to the army. Those deluded enough to think that Nawaz Sharif wants peace with India as opposed to the narrow interests of his corrupt international business empire, need to see the fervent support of LeT aka JuD leader for the PML N government. 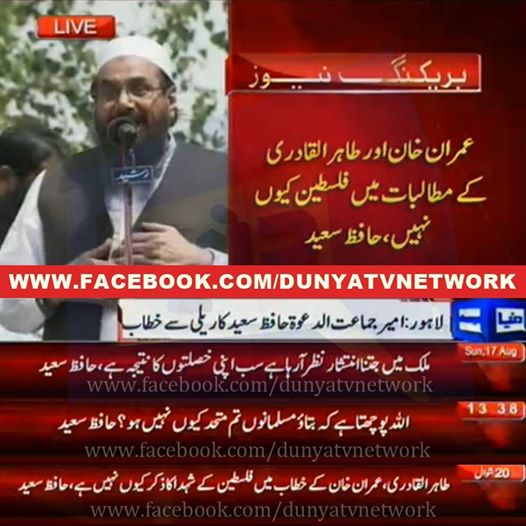 The “anti-establishment” Nawaz getting support from LeT/JuD

Today, it is no surprise to see the beneficiaries of the Noora league blindly defending their paymasters while the country wakes up to the Model Town massacres