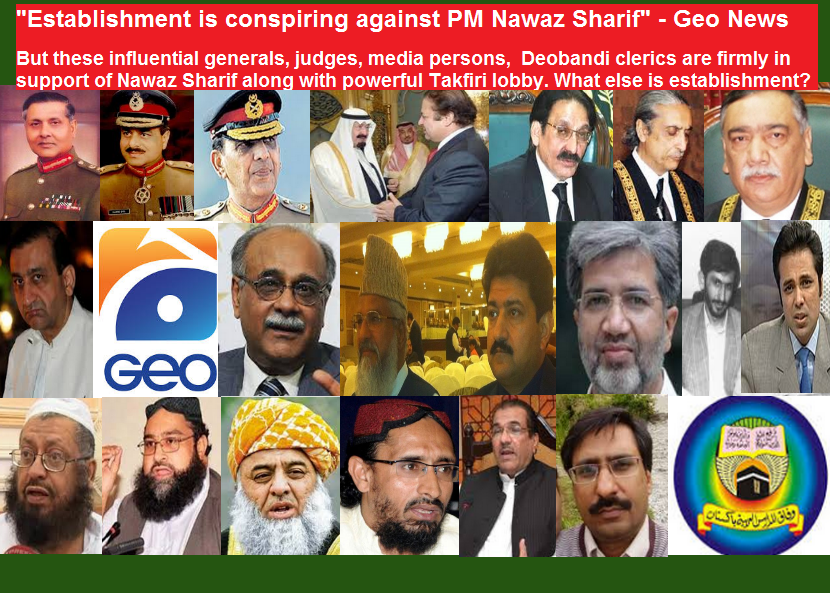 Recently there has been a lot of talk of Nawaz Sharif being a lone ranger fighting against the mighty GHQ aka the military establishment. Certain paid analysts and media pundits are constantly hammering this perception in electronic media and other news outlets. But let’s analyze this perception and see if Nawaz sincerely stood up against the establishment ever in his political career.

Nawaz Sharif has an interesting political history, he has been very controversial since he stepped in to politics back in mid seventies. He started his political career in Tehreek e Istaqlal of Air Marshal Asghar Khan when Bhutto was the Prime Minister of Pakistan. When Bhutto’s government was ousted by a military dictator Zia ul Haq in a coup, Nawaz Sharif not only fully supported this unconstitutional move of Zia but went on to join the dictator in what was one of the most brutal military dictatorship in Pakistan.

During the dictatorship of Zia, Nawaz was made the Chief Minister of Punjab, the biggest province of Pakistan. Nawaz made full use of this opportunity to not only further his previously dismal political career but his personal wealth also increased manifolds. During his tenure as the Chief Minister, Nawaz Sharif also managed to grow close relations with Saudi Sheikhs who are staunch American supporters, in fact they are American puppets.

Zia imposed strict Islamic laws in Pakistan under the pretext of shunning all opposition to his military regime as anti-Islam. This strategy proved very successful as previously unpopular religious parties especially Jamat e Islami fully supported Zia. Religious Parties also helped legitimize Zia’s alliance with USA in Afghan war which was labeled as Afghan Jihad by successful marketing campaign of JI and Muslim League. Interesting to note here is that Nawaz did not oppose any brutal tactics used by Zia on ordinary citizens of Pakistan. Nawaz seemed to be content with Zia’s mission of turning Pakistan in to a theocratic state ruled by a brutal military dictator and helped by religious parties whose foot soldiers terrorized people on the streets during the 80′s. Until Nawaz’s ouster from government in 1998, Nawaz’s main campaign slogan was to complete what Zia had started.

Fortunately for Pakistan and unfortunately for Nawaz, Zia died in a horrendous plane crash triggered by a bomb that exploded in mid air. By this time Benazir Bhutto, daughter of Zulfiqar Ali Bhutto had returned to Pakistan and she was elected as the Prime minister in the next elections. Nawaz Sharif and his friends in the military establishment did not like Benazir one bit, they considered her a threat. So Nawaz conspired to over throw her by fabricating many scandals against her government with the help of the establishment. Point to be noted is that Nawaz could have denied to be a part of these conspiracies by the military establishment but he never did as it helped him gain power and fulfill his godfather Zia’s rather convoluted mission.

In the decade of nineties, Nawaz Sharif and Benazir constantly engaged in tussles and mudslinging against each other. Both came in power many times but never completed their respective tenures as their governments fell victim to conspiracies and counter conspiracies. Finally in the late 90′s Nawaz gathered enough material to oust Benazir from power and successfully ran an election campaign revolving around Zia’s mission. When elected Nawaz’s first order of business was to quash any opposition to his government by either hook or crook, his goons attacked the supreme court, he made completely undemocratic amendments into the constitution giving full power to the prime minister without any checks and balances. His ultimate goal was to declare himself the Amir ul Momineen. Everything was going great for Nawaz until he stepped on GHQ’s tail by shifting the blame of Kargil war on the army. Nawaz as always has presented himself has an infallible politician who never commits any mistakes. In October 1998, Nawaz was ousted from his government through a coup by another military dictator Pervaiz Musharraf who was promoted to Chief of the Army Staff by Nawaz himself ahead of Ali Quli Khan while completely ignoring the merit.

During his incarceration after the coup against his government in October 1998, when it was most needed that he stands up against the dictator and a clear choice between fight or flight was at stake, Nawaz opted for flight rather than fight. He calmly filled 40 suit cases with his belongings and left Pakistan for a luxurious palace in Saudi Arabia along with all his close relatives. He also signed a deal once again with the military dictator hence giving him (Musharraf) more legitimacy.

Now fast forward to the current political situation in Pakistan, Nawaz is back in Pakistan and a dictator has been removed successfully by the people of Pakistan under the restoration of judiciary and lawyers movement. Today’s Nawaz seems to be very different from what it was when he was exiled, today’s Nawaz talks about democracy and strong institutions, he seems to have forgotten all his past mistakes of turning democracy in to fascism, his attack on the supreme court, his complete disregard for merit, amending the constitution to gain absolute power and most of all his unequivocal support of Zia’s brutal regime.

Nowadays Nawaz is talking about government free of any influence from GHQ, but all this seems like empty rhetoric as proven by the recent event in Pakistan. First there were those dreaded “wikileaks” that took the world governments by surprise, spilled many beans and ruined a lot of political careers. Wikileaks proved that Nawaz’s goal is to take over the position of number one stooge of USA in Pakistan from GHQ and PPP.

“The people involved were from this country — I am convinced,” Mr. Sharif is quoted as saying. “We must take strictest action against those elements.” Once India produced concrete evidence, “we should proceed whole hog,” he declared.
Nawaz Sharif was perhaps trying to stay in the good books of US and in doing so securing his prospects as a future leader of the country.”

Nawaz wants to prove to Americans that he is a trust worthy leader of Pakistan for USA. He wants to run Pakistan just like the Saudi Kingdom because in Saudi Arabia everyone is under Shah’s control but Shah himself is under complete American control. This notion is further strengthened by the recent Raymond Davis affair, Nawaz and his party currently ruling in Punjab, helped GHQ release Raymond Davis after a phony trial during which he was released after paying the blood money to the relatives of the deceased. This deal was brokered by Pakistan’s intelligence agencies and Shahbaz Sharif with the help of Saudi Arabia. It seems like if anything PMLN and GHQ are competing to prove their loyalty to USA.

The question that people of Pakistan must ask why should they trust Nawaz Sharif this time?

Nawaz Sharif was given numerous chances of standing up to the GHQ but every single time he rather strengthened the military establishment instead of standing up to them and he continues to do so, in fact he wants to prove to US that he is worthy ally just like the Saudi King. His myopic vision and ridiculous strategy of dealing with GHQ by being an American lapdog is laughable at best. His paid analysts and pundits do not present any strategy to deal with GHQ instead they are busy hiding Nawaz’s role in the shameful act of Raymond’s release by playing blame game in the media.