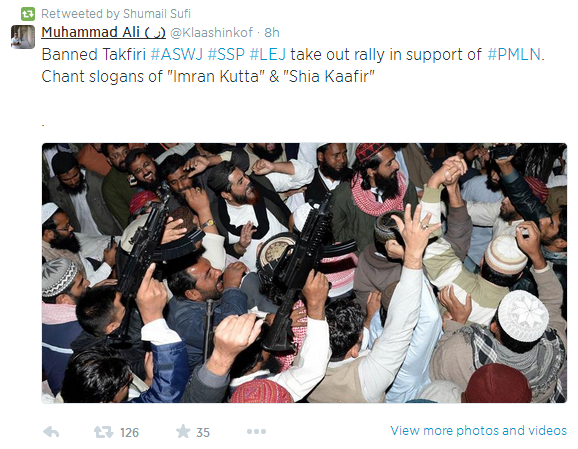 At the point of writing this article at 12:00 p.m (22 August 2014), there is still time for the Friday prayers at Islamabad’s Lal Masjid. Friday as a day is sacred in Islam where Muslims leave their work to pray in a congregation, bowing in front of their Lord as a symbol of unity.

Unfortunately for Pakistan, the mullagards have made Friday a day of terror and fear where gathering for congregation is just a prelude to gather a bunch of street thugs and create panic and anarchy among the nation. And if in the process, if buildings are burnt and people killed, it is a bonus. And banned Deobandi terror outfit Anjuman Sipah e Sahaba (ASS aka Ahle Sunnat Wal Jaamaat ASWJ or LeJ) is trying to bank on the political turmoil that exists in the capital to yet again create havoc.

While ASS turns up the sectarian heat to scare away a purely political crowd of PAT and PTI in support of government, some of the ‘concerned’ journalists are paving its way to generate violence with excuses which can only be described as disgusting sectarian hatred. 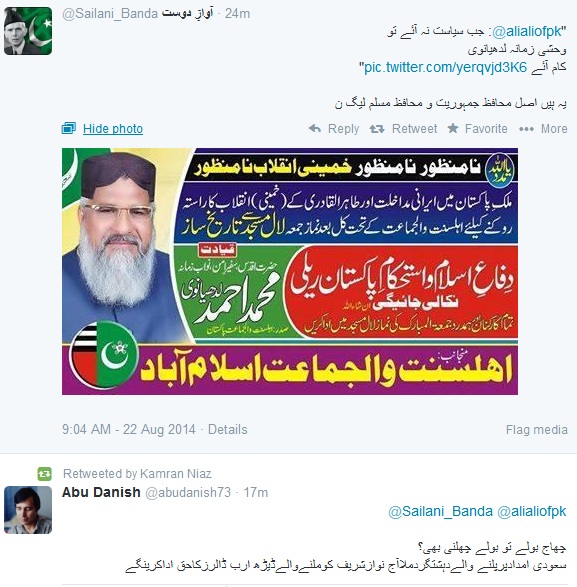 Renowned journalist, self righteous Talat Hussain who used to accuse PPP’s CM Raisani’s drinking problem for the Hazara Shia massacares in Baluchistan, instead of actually doing his journalistic duty to expose the hidden links of the ASWJ-TTP- LeJ with local deobandi takfirialliances, has now come out to lay the ground work for ASS in Islamabad.

This is not a joke. These divisions are serious. These are open invitations to a suicide hit.

So as per Talat, the qawalis and what he refers to as ‘pseudo-sufism’ are the direct invitation for suicide attack. Not only that, he goes one step further to lay the blame directly on Qadri:

People here are in serious jeopardy. And Qadri is only aggravating it by such projections. 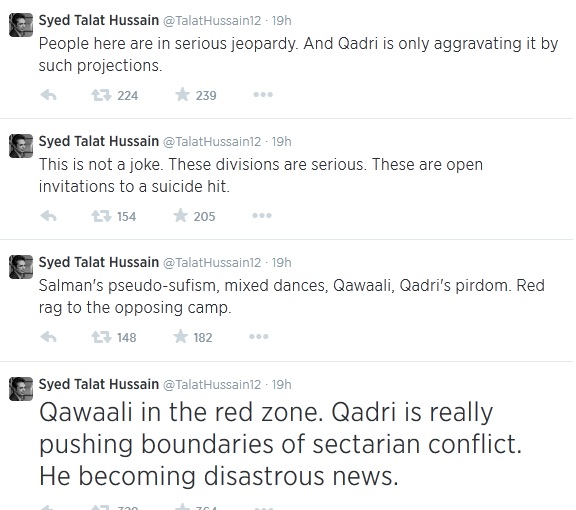 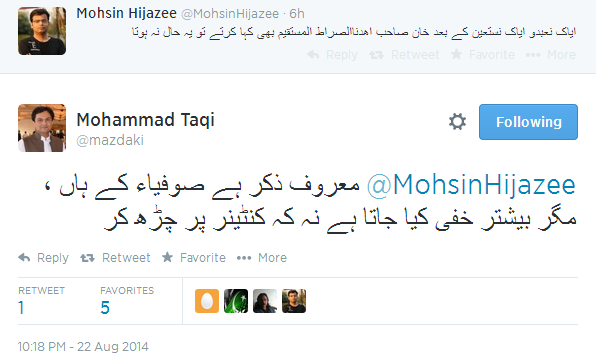 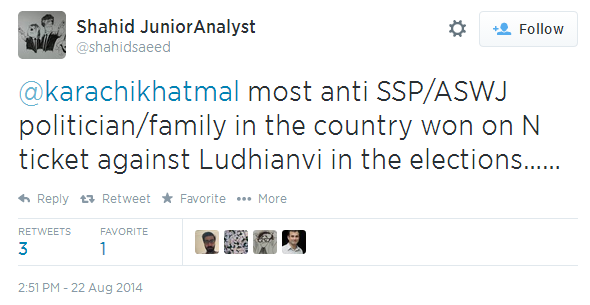 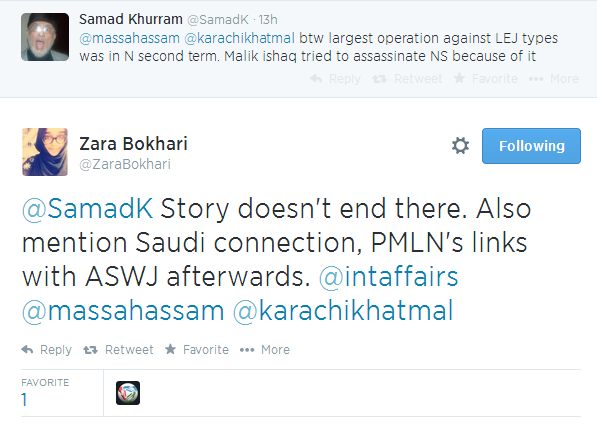 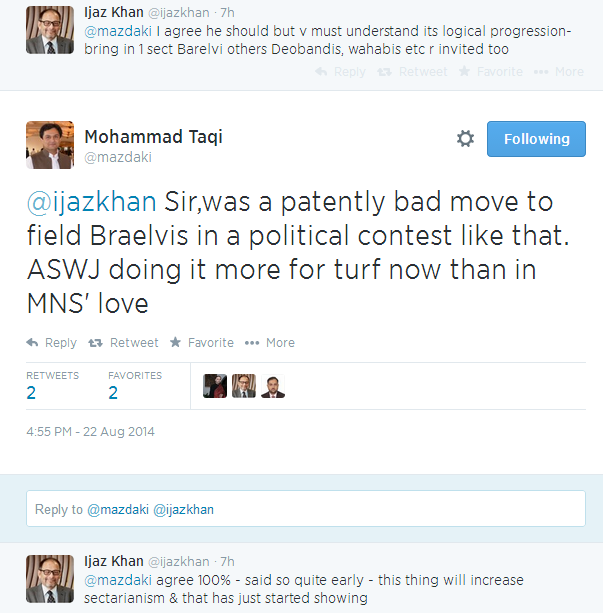 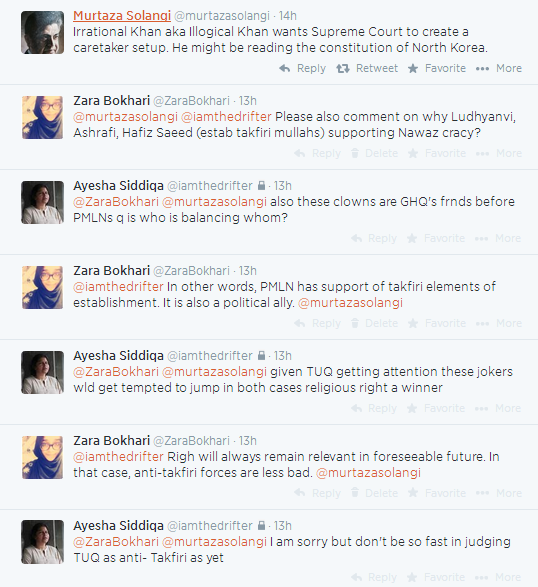 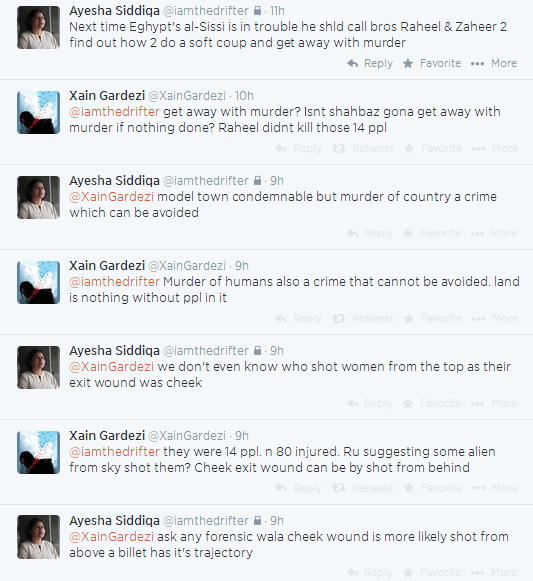 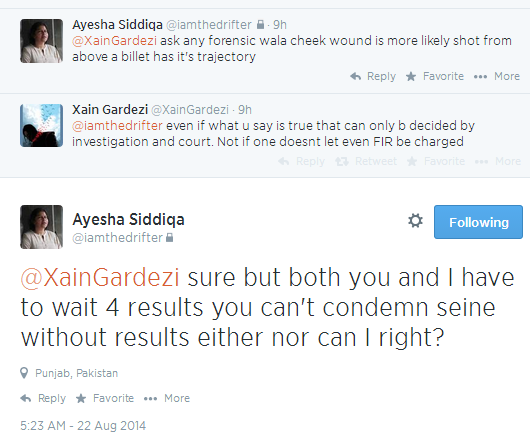 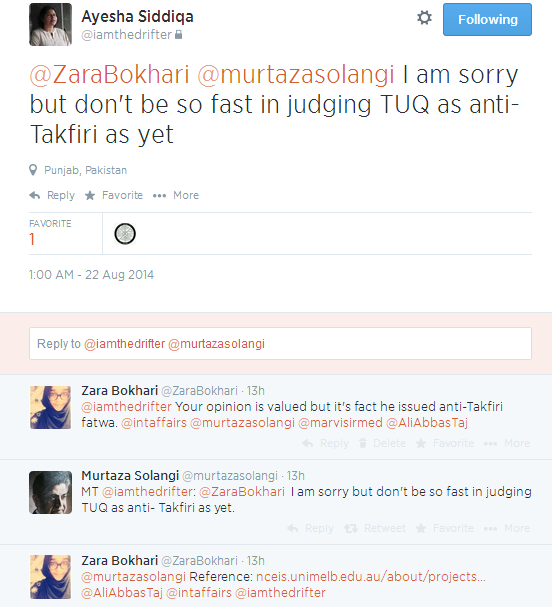 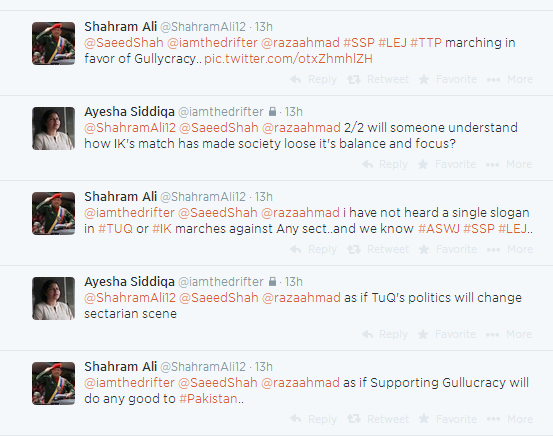 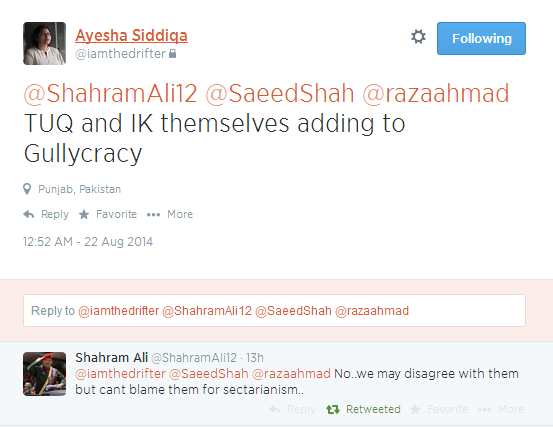 I would like to remind Talat Hussain that the Qawali and Sufism is part of the subcontinent culture and representation of the majority of Pakistanis. This malicious attack on Qawwali and Sufism is yet another attempt by the same circles which constantly try to project a certain kind of mindset among Pakistanis and try to abandone or alienate our own heritage.

I would like to remind Talat Hussain that the Qawali and Sufism is part of the subcontinent culture and representation of the majority of Pakistanis. This malicious attack on Qawwali and Sufism is yet another attempt by the same circles which constantly try to project a certain kind of mindset among Pakistanis and try to abandone or alienate our own heritage.

This is again the same thought process which accuses the victims instead of killers. The same mindset which blames Muharram processions for bomb blasts, which blamed Shaheed Muhtarma Benazir Bhutto for the ‘Kaarsaaz’ bombing in Karachi and her own death in Rawalpindi. If takfiris have problem with qawali why should we be changing our way of life to suite what they like? Does Talat suggest that PTV may also be attacked for showing qawalis throughout all these years and in that case, will he be blaming TV for it? What was the crime of the people who were killed in Qissa Khwani Bazaar while they were just shopping? Does Talat think in order to appease TTP, women should stop going out for shopping as well?

And all this is being done on the day where ASS (ASWJ-LeJ) plan to come out in numbers to attack PAT-PTI political rallies. People like Talat and junior operatives such as Mohsin Hijazee who are busy retweeting his opinion and only making justification groundwork for violence and turning what is purely a political agitation into a sectarian color. Perhaps for ASS and the likes of Talats and Hijazees, it is alien to see shias and sunnis sitting together in PAT rally? Is that the reason they are desperate to give sectarian color to this political movement? From the start of these rallies they have tried to float the idea that somehow this will end up in violence. When they have seen that participants have not even broken a single glass, is qawali the only excuse left to justify future violence (which again is not being planned by the participants)? 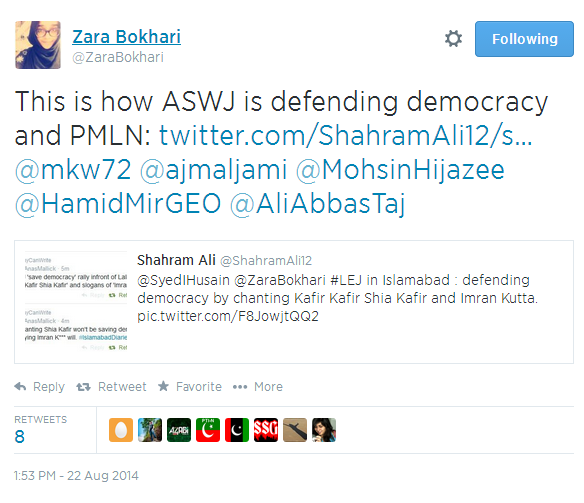 Tahir ul Qadri’s Minhajul quran is mainly a Sunni organizations rooted in Sunni Hanafi and Sufi culture and literat
ure. In fact three years back, Qadri delivered a few lectures expressing his disagreements with Shia Muslims and many Shia scholars gave their rebuttals. Many of his videos of those lectures are still uploaded on Youtube even by ASWJ accounts. Despite theological disputes, Shia political party MWM is still sitting with him. Sunni Ittehad Council is again a Sunni organization. So two out of three participants of the PAT rally with bigger majority are Sunni. Yet, ASS (ASWJ) finds the need to label it ‘Khomeni or Iranian revolution’.

For ASS, it is understandable that they find hard to chew the fact that their mission of alienating shias has not materialized thanks to sunnis which are being termed by Talat as ‘pseudo-sufis’. This pseudo salafi should realize that so far PAT rally despite whatever political faults they may have, have not yet talked anything sectarian. Instead on of its demands are that no sect be allowed to do takfir of other sect. Is that a problem? They have only talked against khawarij who are even condemned from the likes of Ibn Tamiyyah to Bin Baaz. Yet this pseudo Salafi inspired from takfiri branch of Deobandis is trying to manipulate a non sectarian political rally into sectarian and the likes of Talat Hussain and Mohsin Hijazis are cheer leading. 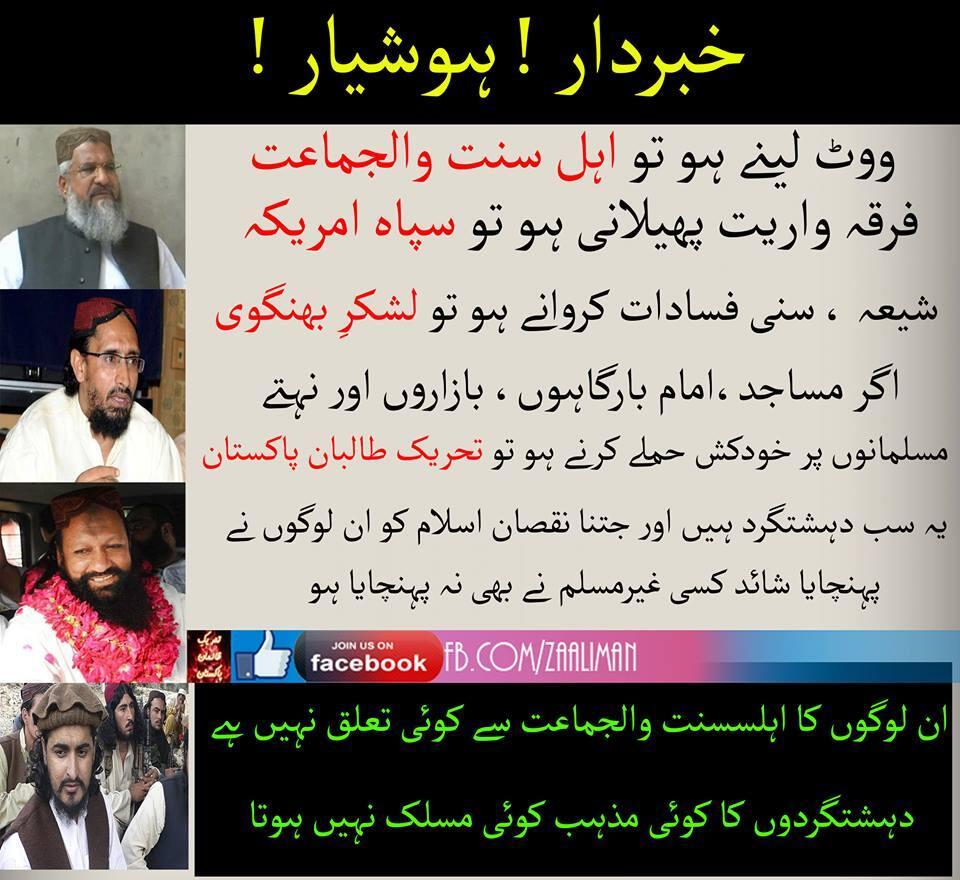 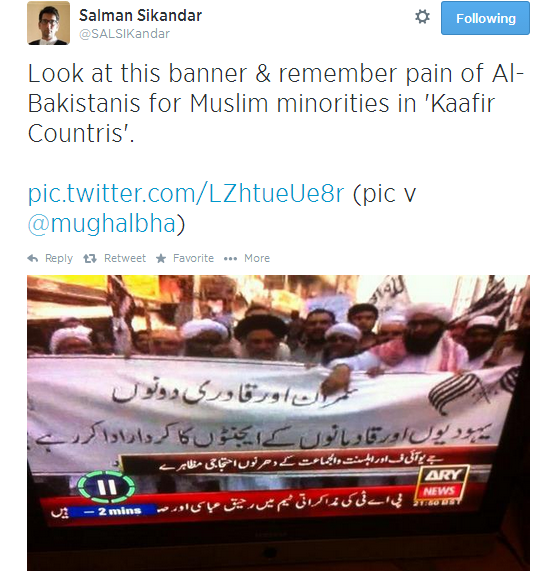 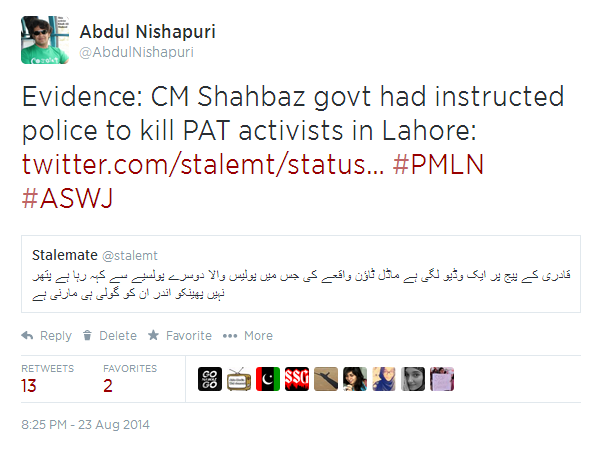 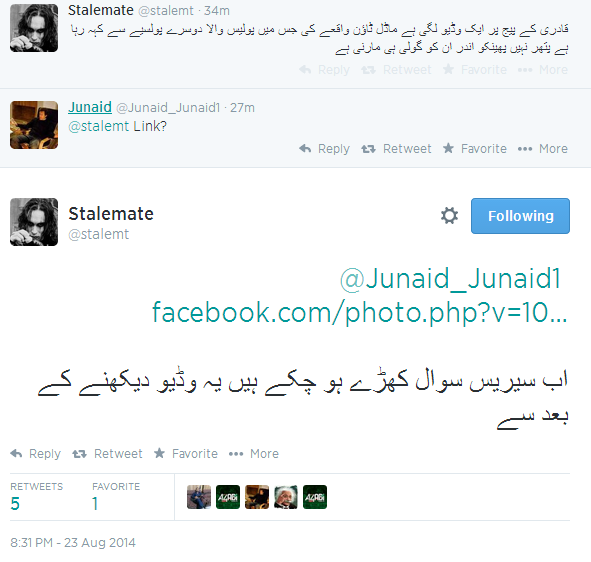 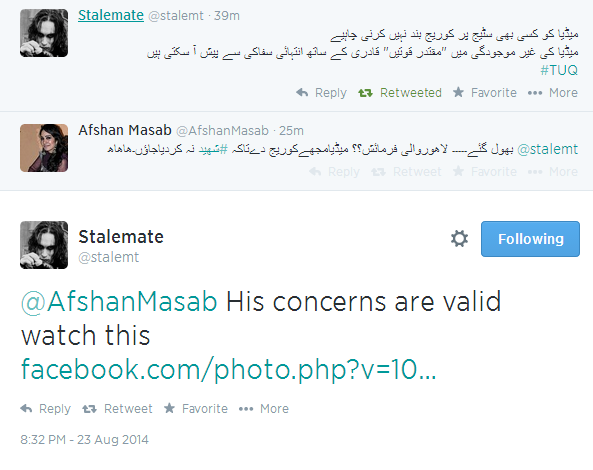 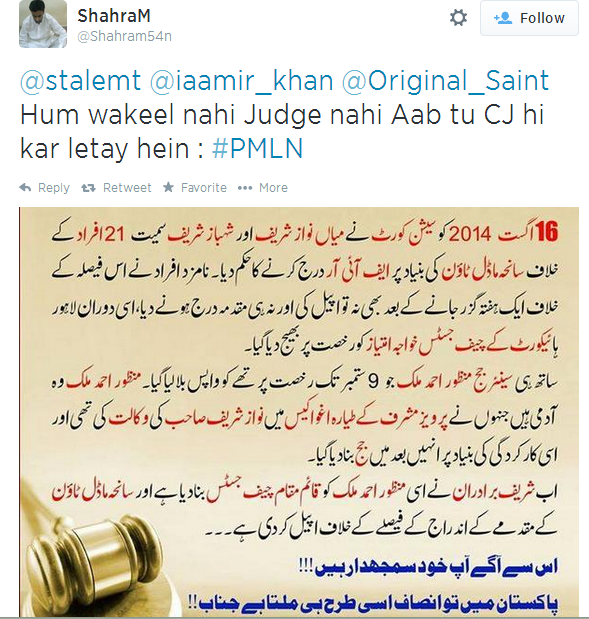 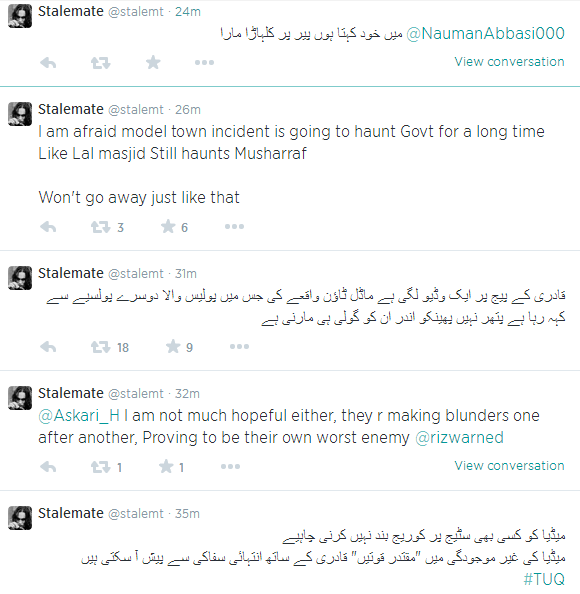