Home  »  Newspaper Articles   »   Karachi airport attack: The world is not safe until Pakistan cleans up its mess – by Rob Crilly 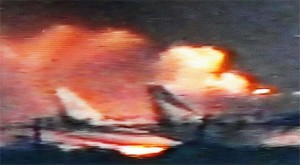 Security at Karachi’s airport was never foolproof. Driving up to its departure terminal cars are stopped by armed guards, allowing an officer to walk alongside with something similar to one of those novelty golf ball detectors, the ones marketed as “bomb detectors” by a British fraudster now serving jail time.

But that’s not the issue. There is not much any security can do in the face of a gang of men who have strapped on suicide vests, said their final prayers and have their minds on the 72 virgins that await. No target can be secure enough.

The question now is what last night’s attack on the airport says about Pakistan, the Taliban and the continuing drawdown in neighbouring Afghanistan.

The Pakistan Taliban – an umbrella group of thugs, gangster and sectarian terror outfits related to, but distinct from the Mullah Omar’s Taliban in Afghanistan – has had a quiet year. It announced a ceasefire and opened talks with the government while the threat of a massive military operation against its bases loomed.

Talks predictably went nowhere. Yet last month it seemed the Taliban was suddenly on the back foot. A key part of the powerful Mehsud clan broke away, accusing their comrades of un-Islamic practices and saying it wanted to pursue peace negotiations.

At the same time, the military stepped up bombing runs and targeted operations against havens. Could its policy of divide and rule be bearing fruit, splitting the militants before wiping them out?

The bloody assault on Karachi airport last night shows the flip side. Once proxies have been armed and let loose – in Pakistan’s case to act as an informal arm of foreign policy in Kashmir and in Afghanistan – they are impossible to put back in their box.

As savvy analysts told me at the time, the split likely marks a return to Pakistan’s discredited policy of Good Taliban; Bad Taliban. While American troops head home from Afghanistan, while an election is under way, it would be silly of Islamabad to give up its proxies, runs the reasoning. Who knows what might happen across the border? Who knows what allies Pakistan might need? So long as the Good Taliban steer clear of Pakistani targets then all is well.

Rather than clear the militants, the havens can be left for now.

But while those refuges remain, the Bad Taliban will remain too. Security officials might already have started announcing that Chechen and Uzbek nationals were behind Sunday night’s attack, and that they were using Indian-made weapons, but do not be fooled. This is Pakistan’s problem.

Until these havens are cleared, until Pakistan turns its back on the proxies, these attacks will continue.