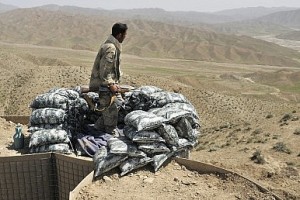 On the evening of March 20, two teenagers entered the buffet area of the luxurious Serena Hotel in Kabul. The well-guarded establishment was a popular meeting place for politicians, diplomats, and journalists; a kind of refuge away from the danger constantly present in Kabul. Like the many guests assembled at the Serena this night, the two young men told security officials that they were visiting the hotel for dinner to celebrate the Afghan New Year. As guests filled their plates and live music echoed throughout the hall, the men entered the dining area and began wildly shooting, killing nine people before being killed by security. Among the dead were the noted Afghan journalist Sardar Ahmad, who was killed with this wife and two daughters, and Luis Maria Darte, a longtime Paraguyan diplomat and election observer.

Two days later, Afghan President Hamid Karzai released a statement saying the terrorist attack had been conducted “by an intelligence service outside this country.” Which entity did he have in mind? If there was any doubt, Karzai quickly put it to rest the following week in an interview he gave with an Indian television channel, when he said that terrorism was “nurtured” and “supported” in Pakistan, where the militants had their “ideological roots.”

For four decades, Pakistan’s spy-generals have played Afghanistan like a powerful chip in a consequential game of poker. They know the important local militants, have open channels to their favorite groups, and regularly play various groups against the Western coalition. The twin justifications for the aggressive intervention in Afghan affairs are India and American withdrawal. Since Pakistan’s humiliating dissection at Indian and nascent Bangladeshi hands in 1971, Islamabad’s doctrine vis-à-vis Afghanistan has been known as strategic depth. For the ISI, Afghanistan is to be a safety net should the delusional prediction that India will invade a weaker Pakistan actually come true.

A widespread view in Pakistan’s elite circles is that the U.S. will soon withdraw and leave the Afghan problem at Pakistan’s doorstep. I have been hearing a variant of this view for five years now. With U.S. President Barack Obama’s decision to leave 9,800 troops in Afghanistan through the end of 2014 and potentially leave zero troops after two years, it is apparent now that this view has not been unfounded. But Pakistan has wanted a vacuum in Afghanistan all along. A despoiled, anarchic vestige of a state to its east means that Pakistan can virtually control the territory, as it did through its various puppets in the 1980s and 1990s.

During the Soviet-Afghan War – during which American arms were shipped into Afghanistan through the ISI – Pakistani spymasters channeled funds and arms into the hands of their favorite militant groups, often the most retrogressive and extremist of the Mujahedeen. Leaders of some of these groups studied in Pakistani madrassas, a wellspring of indoctrination and militant thinking. By one estimate, the number of madrassas in Pakistan feeding the jihadists surged from 900 in 1971 to 32,000 in 1988. The ISI’s strategy at the time – and which remains its strategy today – can be summed up by what Pakistani dictator Zia ul-Haq told one of his generals: “Afghanistan must be made to boil at the right temperature.”

In the intervening period, Afghanistan has done more than boil. It has been flayed and seared by selfish American short-termism and poisonous, neocolonial Pakistani long-termism. As is well known, the Afghan Taliban were themselves a creation of the ISI, and a de facto proxy by the time they took over Kabul in 1996. In 1999, Benazir Bhutto’s minister of interior, Nasrullah Babar admitted it quite explicitly, pronouncing, “We created the Taliban.”

Today, the “Talban” are a hodgepodge of militant outfits, though the central leadership of the Afghan Taliban is thought to be in Quetta, Pakistan. For the ISI, there may be a chickens coming home to roost moment, as Pakistan faces a brutal insurgency within its own borders that has adopted the Taliban name but is in many ways far more rejectionist and hostile to the governing authorities. To give just one example, the Afghan Taliban support polio vaccination while the Pakistani Taliban vow to kill anyone offering such treatments. The ISI’s game of prolonging the post-9/11 insurgency in Afghanistan long enough for the tired American leviathan to pack up and go home – and for Pakistan to move in more forcefully – is the direct cause of this terrorist surge, which has taken over 50,000 lives. There are now three separate but interrelated insurgencies eating at the Pakistani state like overfed parasites: the sectarian Sunni jihad against Pakistan’s Shia population, the Balochi insurgency, and the gangsterism and religious extremism destroying Karachi. When exporting militancy is a state’s central foreign policy tool, it does not take long for the pawns to turn their guns on their masters.

According to a number of reports, the ISI – sometimes called a state within a state – operates a highly secretive, off-the-record “S Wing” that is used to support the various militant groups that have been central to Pakistani foreign policy. A report leaked in 2006 by the British Defense Ministry stated, “Indirectly Pakistan (through the ISI) has been supporting terrorism and extremism.” The report went so far as to link the ISI to the 2005 London bombings, in addition to the various insurgencies in Iraq and Afghanistan. A 2012 NATO study based on 27,000 interrogations of 4,000 captured Taliban and al-Qaeda fighters concluded that the ISI provided safe havens to the Taliban, monitored their movements, manipulated their fighters, and arrested those thought uncooperative.

Behind all this lies India, which had been an ardent supporter of the Northern Alliance and today has an active presence in Afghanistan. The threat of Indian encirclement of Pakistan via Afghanistan seems widely overblown. There are fewer than 3,600 Indians in Afghanistan – most of them businessmen – and just 10 Indian diplomatic officers. While there is considerable evidence of Indian support of Balochi separatists, the paranoid ISI view of India in Afghanistan ignores New Delhi’s vested interest in a stable and prosperous Afghanistan. It also ignores the centuries-old history between India and Afghanistan, and the erstwhile Indo-Afghan frontier. Afghanistan has received more than a billion dollars of Indian aid and, in 2009, celebrated the completion of the Zaranj-Delaram road, giving it better access to Iran. There is also the much-discussed animosity towards Pakistan by Karzai and by Pashtuns in general, who consider Islamabad an aggressive, prevaricating, double-dealing regime.

The unfortunate but crystalline reality of Afghanistan’s future is that it hinges on the decisions made by Pakistani generals and whether their actions will be checked by a Coalition response. This is not to suggest that Afghanistan’s future is lost. To recapitulate some recent victories: 7 million Afghans turned out to vote on April 5, thirty-five percent of them women. The Afghan election went forward despite threats from the Taliban and accusations of fraud. Voters jubilantly participated in the electoral process, thwarting attempts by militant groups who have violently opposed elections.

Regardless of who wins, however, Pakistan will be deeply involved in the internal workings of Afghanistan. It will be up to neighboring states and whatever remnant of the international community that is still engaged to ensure that over a decade of conflict and reconstruction does not conclude with a de facto takeover of Afghanistan by its neighbor across the Durand Line.

Omer Aziz is a writer and journalist from Toronto. In 2012-2013, he was a Commonwealth and Pitt Scholar of International Relations at Cambridge University. He has written for The New York Times, The Globe and Mail, Salon, the Woodrow Wilson Center, and other outlets. He tweets @omeraziz12.