Pakistan in a Modi Abdullah Abdullah sandwich – by A Z 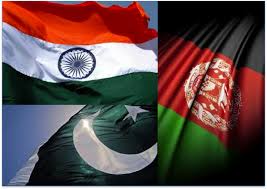 Modi’s election is good because, in India and Pakistan it is only hardliners, who are not mistrusted by the armed or communal vigilantes and therfore can sue for peace in conflicts. The last BJP government almost did it, till the mad Musharaf blew it up with his Kargil adventure. Modi (like Obama) is way too canny to fall for double games. Either you support Jihadis and terrorism or you don’t. Time to pick and choose is gone.

Modi is the first strong leader to take the reins of power in India since Indra. I hope he is not found out of his depth in the new role. Otherwise, he is decisive, clear-headed, and pragmatic.

I am not so apprehensive about the minorities, unless they behave foolishly. These are important times for the Muslims of India. Intelligent minorities round the world know to manage or at least cope with the changes whose course they cannot influence.

Does Modi have an axe to grind against the Muslims, going forward?

No, I don’t think so. Modi is not an ideologue, he is a pragmatist. Rising from where he comes to where he is reeks of a ruthlessly ambitious and practical man. He has exhausted communal narrative to reach where he is. Now being a smart man, I would bet, he will know he needs a new narrative to go forward and achieve what he dreams of.

To me, Modi resembles Erdogan: a hi-tech populist holding together a fragile coalition of big business, impatient urban youth and religious fundamentalists. Those incongruent groups can be kept together as long as growth comes. So his first priority will be economic growth and international political clout. If that does not happen then Modi and his cohorts can always go hunting for an enemy: Pakistan, India’s own minorities, and the pseudo-seculars. However, for now, there is no imperative to do so.

Modi is a man who is in it for a place in the history and he knows the fate has handed him a great chance. He is ascetic and financially honest. He has had no powerful relatives looking out for him. He has not been to the best Indian schools and is not interested in big cars or showy status symbols. He lives a very simple life and has no cultural capital of the old guard within his own party, let alone the grandees of the Congress party. He is not comfortable speaking in English, communicating with his close associates in Gujarati and addressing crowds across the country, very effectively, in Hindi. He comes from the low caste.

The advantage is that Modi follows in the footsteps of the most ineffectual Indian PM in my experience. The negative is that the expectations from him, fuelled by the world’s biggest ever youth bulge, are already touching stratospheric altitude, which is often a burden in the subcontinent to make the best and the brightest falter. I am excited at the prospects of watching how Modi does.

Abdullah Abdullah’s election is good for Afghanistan as it heralds an era of diversity and ethnic tolerance. It is good for Pakistan, because we need a government in Afghanistan that can stand up to Pakistan’s interference in that hapless country. While India and Pakistan can share the blame for their follies, it is about time Pakistan stops screwing up the poor Afghanistan under the notions of Strategic Depth of whatsoever. A dose of reality will be good for Pakistan. My head hangs in shame when I see what Pakistan has done to Afghanistan in the past 35 years. Not that Pakistan is the only one to blame but Pakistan’s belief that it is entitled to decide who rules Afghanistan is reprehensible.

Pakistan’s good lies in sprucing up its own act rather than running Afghanistan.