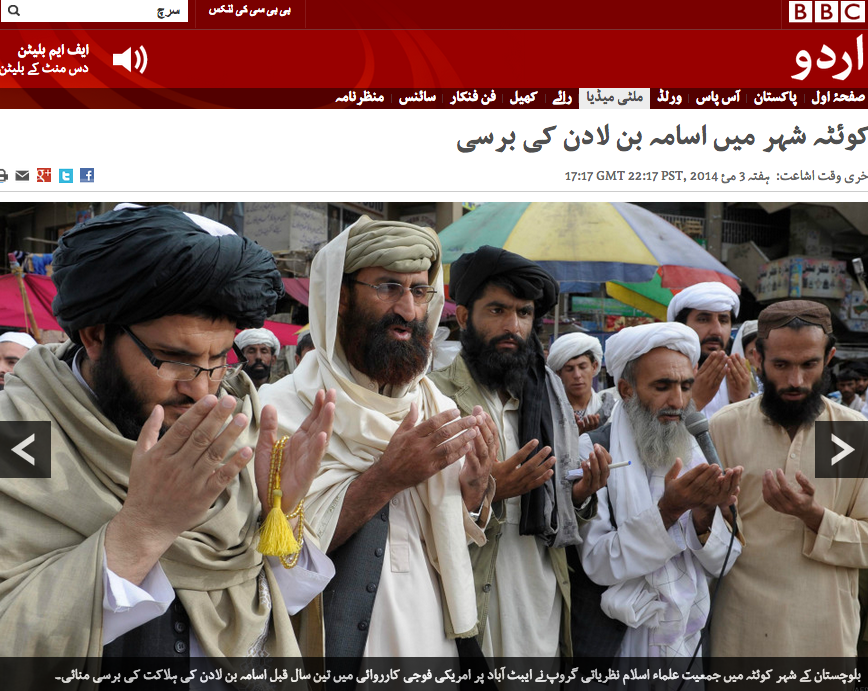 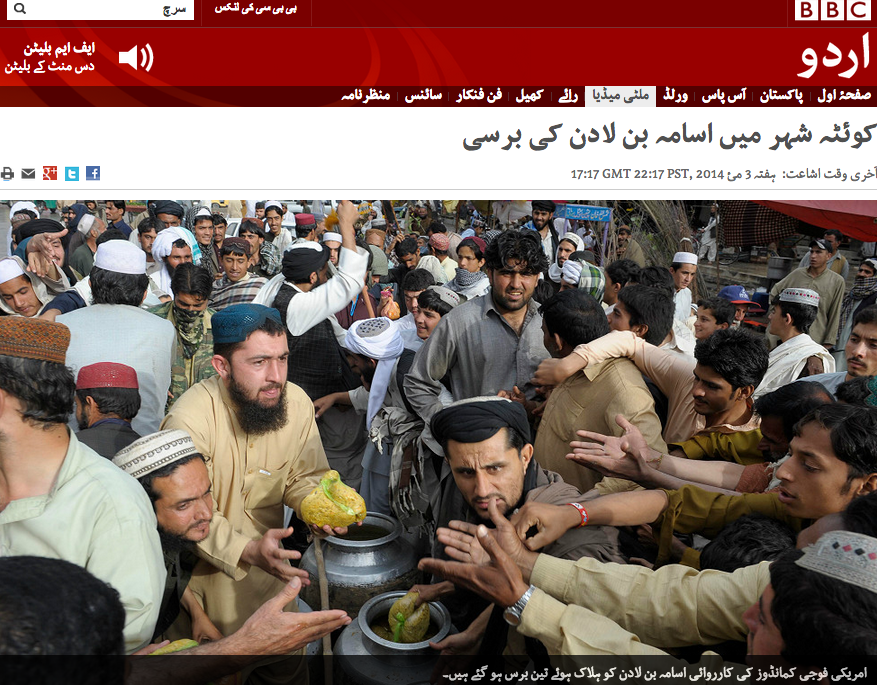 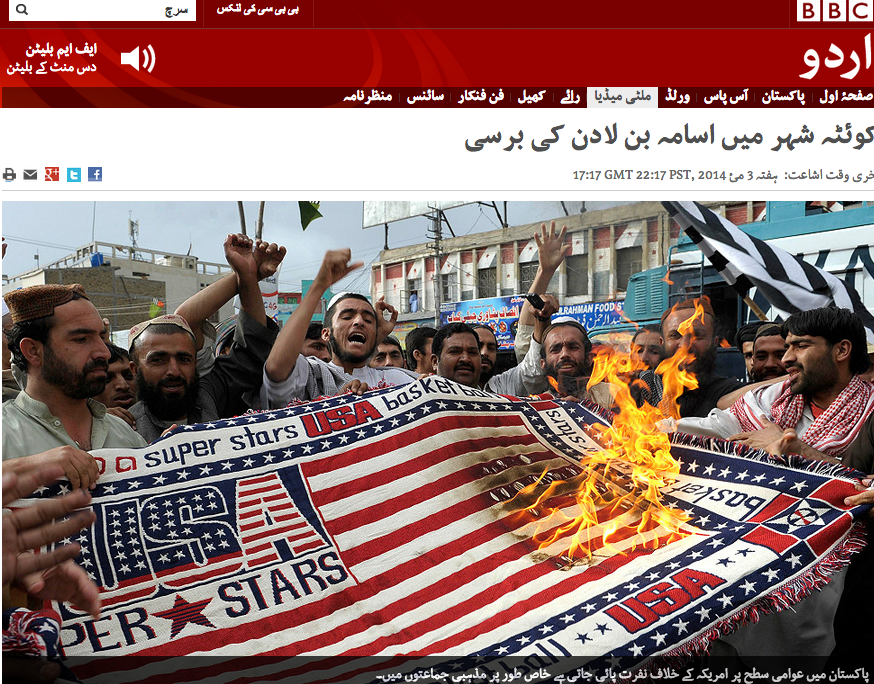 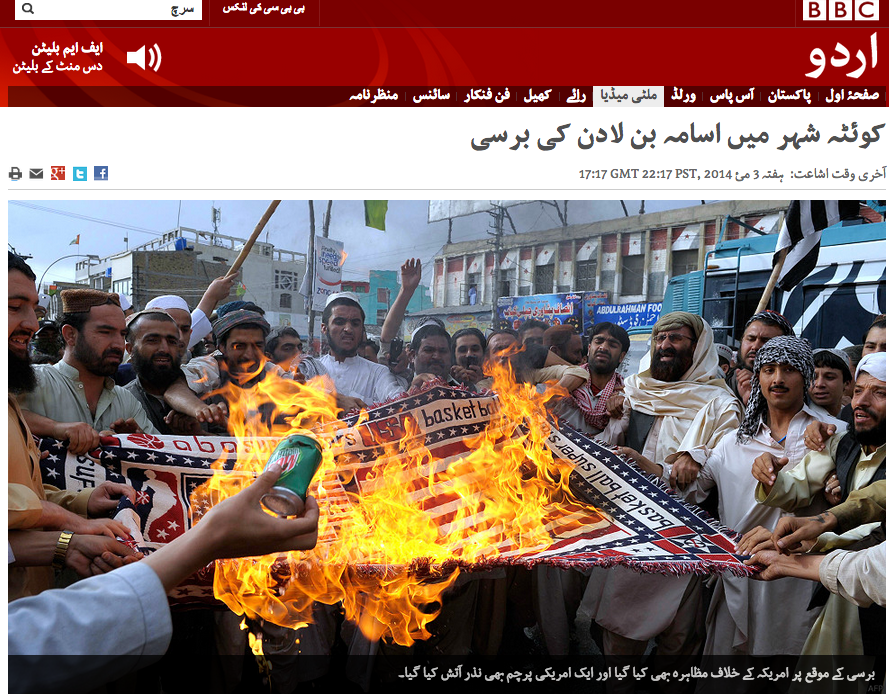 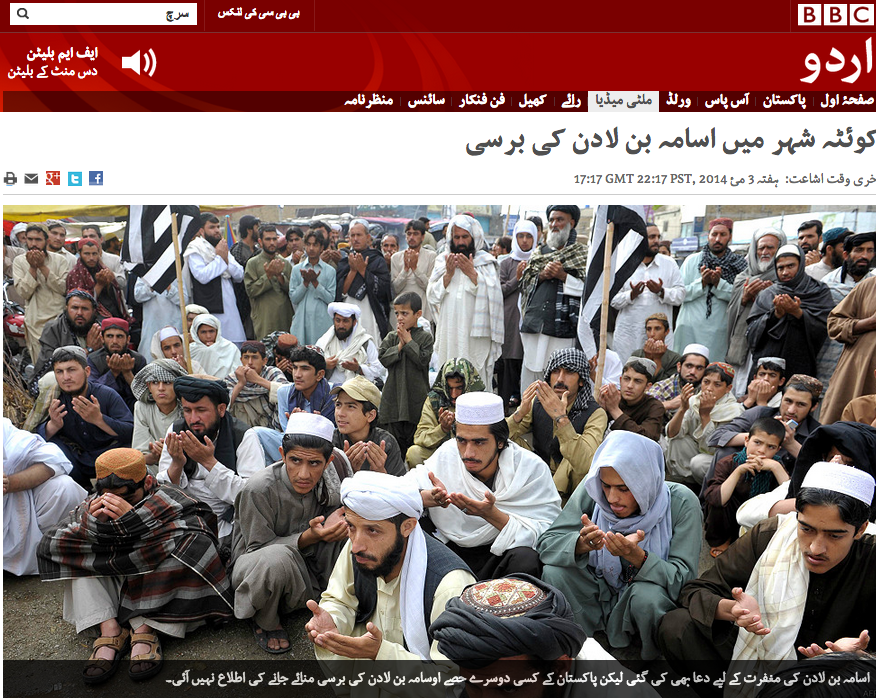 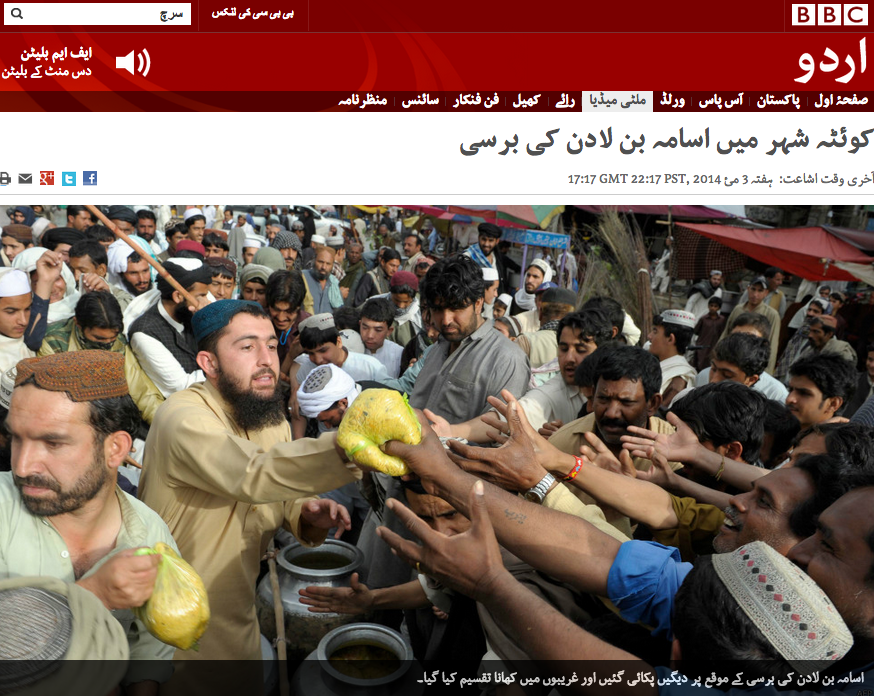 According to reports published in Pakistani and international media, thousands of Deobandi Muslims (a semi-Wahabi sect known for violent ideology, mainly adhered by Taliban TTP and Lashkar-e-Jhangvi LeJ) in Pakistan paid tribute to Osama bin Ladin on his death anniversary in May 2014.

According to an AFP report published in Al Ahram newspaper (also reported by BBC Urdu):

Hundreds of Islamists rallied in Pakistan’s southwestern city of Quetta Thursday to pay tribute to al-Qaeda chief Osama bin Laden on the second anniversary of his death.

Organised by a pro-Taliban faction of Jamiat Ulema-e-Islam (JUI), headed by Maulvi Ismatullah, some 450 participants at the rally chanted: “Long live Islamic jehad and long live Mulla Omar!” an AFP reporter at the scene said.

Many of them were also carrying portraits of bin Laden. The JUI’s central secretary for information, Maulana Abdul Sattar Chisti, paid tributes to bin Laden. “We are observing death anniversary of an Islamic hero, who was killed by American and Pakistani agents,” he said. “Bin Laden’s martyrdom gave a new impetus to jehad against forces inimical to Islam,” he added. Bin Laden, the founder of al-Qaeda and mastermind of the 9/11 attacks on the United States, was killed on 2 May, 2011 in a secret US Navy SEAL operation in a walled-off compound in the Pakistani garrison town of Abbottabad.
http://english.ahram.org.eg/NewsContent/2/9/70596/World/International/Hundreds-in-Pakistan-pay-tribute-to-Osama-bin-Lade.aspx 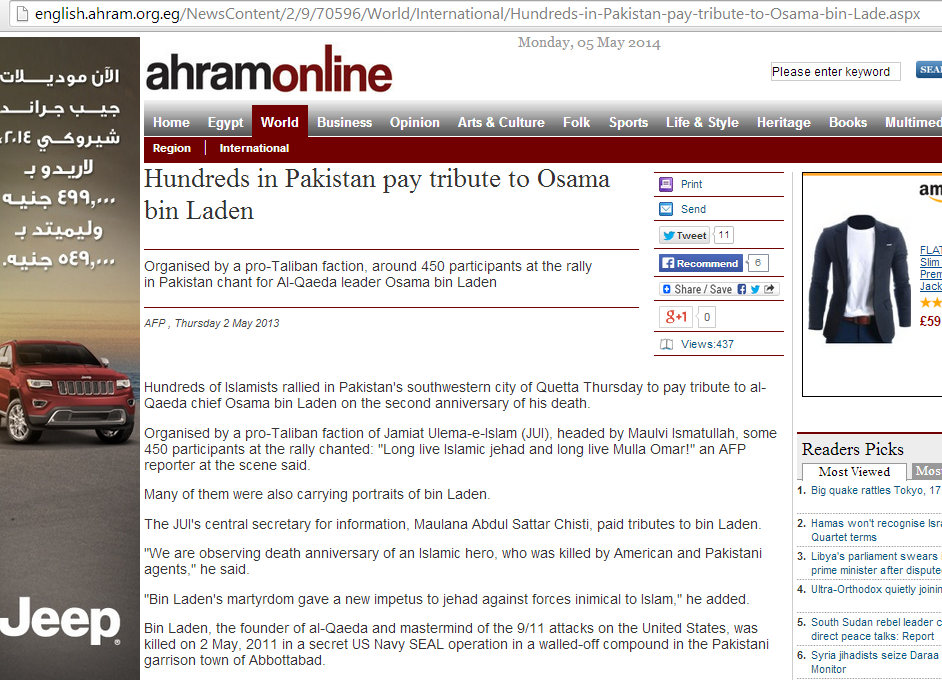 Not unlike Wahhabism of Saudi Arabia, the Deobandi sub-sect of Sunni Islam (Wahhabi suurogate in India and Pakistan) is the main carrier of the terror virus. The Deobandis at all levels have shown they eulogize and admire the the world’s most brutal terrorists. Their Madrassas are adorned with pictures and references to current and fallen terrorists like Osama Bin Laden, Haq Nawaz Jhangvi and Mullah Omar. They have been conditioned by their clergy to inflict the worst terror on humans that they see as different from them. This othering phenomenon is the injection of the Salafi thinking from Saudi Arabia.  For all practical purposes, Deobandis of today are identical to the thinking of their Saudi Salafi brethren even though the origins of Deobandis lie in the more moderate Hanafi school.

Media and research reports in the last few years have shown that Deobandi seminaries of Pakistan and Afghanistan are a key source for radical ideology as well as Jihadist recruits for the Taliban, Lashkar-e-Jhangvi (currently operating as ASWJ), and Al Qaeda. Recently, Pakistan’s Dwan newspaper published news reports in which Deobandi ASWJ leaders were protesting for free passage from Pakistan for foreign Al Qaeda militants. Dawn also published reports confirming that Saudi Arabia and other Arab countries are major financial sponsors of Deobandi madrassas in Pakistan. In recent pasts, two bombs have prematurely exploded in two Deobandi madrassas/mosques in Karachi and Peshawar respectively confirming that Deobandi seminaries/mosques are used for terrorist activities and Jihadist training.

The Saudis needed  to create a client group in the Indian subcontinent which could give legitimacy to their caliphate. Deobandis had a history of links between Abdul Wahhab and Shah Waliullah dating back two hundred years. This made them the perfect candidates to be the extended support group of the Saudi Caliphate. Deobandis, although a different sect from Salafis/Wahabis, are semi-Wahabi in their political and ideolgical orientation, thus supporting Osama bin Laden, who himself was a Salafi/Wahabi. In their violence and hatred of West and religious minorities (Christians, Jews, Shias, Sunni Barelvis/Sufis, Ahmadis etc), Deobandis are no less violent than Wahabis.

Deobandi groups promote Xenophobia in Pakistan, particularly in the shape of hatred against USA, UK etc, thus participating in or contributing to acts of violence against US, UK, other Western citizens. In the same manner that the Imam of Mecca advocates burning of churches and Shrines.

All top terror outfits in Pakistan are Deobandi, eg Taliban (TTP), Sipah-e-Sahaba Pakistan (SSP aka ASWJ), Lashkar-e-Jhangvi (an alias of SSP-ASWJ), Jaish-e-Muhammad (JeM) etc. Accordingly to a research by University of Pennsylvania, 9 out of 10 terrorists in Pakistan belong to Deobandi sect. 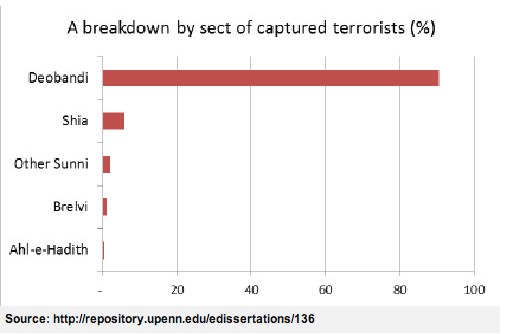 Deobandis are a dangerous group and extension of the evil that emanates from Mecca under hate spewing Islamofascist Salafists. Deobandis have killed thousands of Shia, Sunnim, Christian, Ahmadi and other minorities in Pakistan. Their objective is the othering of anyone different from them, the systematic killing or conversion of all deviants within Islam and ultimate killing and elimination of Christians and Jews.

Note: To understand the nexus and historical context between Deoabandis of South Asia and Wahhabis of Saudi Arabia, please read : https://lubpak.com/archives/313032