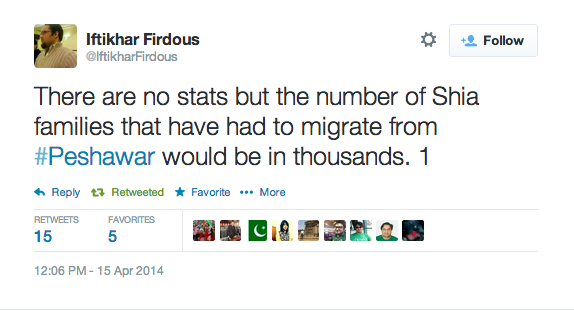 Editor’s note: Shia Genocide and ethnic cleansing in the provincial capital city of Peshawar has reached apocalyptic levels. Shias are being wiped out from Peshawar. The rich and diverse traditions of Peshawar are now dead. The various government agencies and the Pakistan Army are enabling the Genocide through their Kharji Deobandi Taliban proxies.

We say goodbye to Peshawar nights, intellect, debate, music and art. The dawn of a new Kharaji Deobandi stone age is upon us.

PESHAWAR: A pamphlet, attributed to the banned Lashkar-i-Islam (LI), was distributed in a neighbourhood of the Khyber Pakhtunhwa capital threatening residents, mostly Shia Muslims, to vacate the area in the next ten days, police said on Tuesday.

The threatening pamphlet, with letter head of LI chief Lutfullah, said that the militant outfit’s shura (council) has decided to act against the colony, without elaborating what caused to offend it.

Lashkar-i-Islam – a Bara-based militant organisation in Khyber tribal region led by Mangal Bagh – was banned in 2008.

Police said they have launched an investigation to ascertain the pamphlet’s authenticity. They said police contingent has been increased with more patrolling in the area.

A local cleric in Bara, Mufti Munir Shakir formed the Lashkar-i-Islam in December 2004 after Sipah and Malikdinkhel tribesmen announced their full allegiance to him. However, the cleric was expelled from Bar Qambarkhel area after only six months owing to his extremist views and differences with Haji Namdar, another militant commander of the area.

Both Mufti Munir Shakir and Pir Saifur Rehman were forced to leave Bara after a jirga of local elders gave a consensus verdict following bloody clashes between the supporters of the two in early 2005. Mangal Bagh, a bus driver-turned-militant was elevated to the position of amir (chief) of Lashkar-i-Islam in May 2005.

Pakistani security forces demolished the house of Haji Rabat and destroyed the FM radio station set up in a mosque after they started the first military operation against Lashkar-i-Islam in mid-2005.
Source: http://www.dawn.com/news/1100097