Editor’s note: The Aga Khan does not realize that it not only  Shia Muslims who are being killed in Pakistan, the Deobandi terrorists (operating as Taliban and Sipah-e-Sahaba) are killing Sunni Barelvis/Sufis, Christians, Ahmadis, and other communities. He does not understand what it means to come out for the sake of the Family of the Prophet and get killed most ruthlessly. Even a few of his own disciples, the Ismaeli Shiites, despite the fact that they hide in their Jamat Khanas during Muharram and the rest of the year, have not been spared by Deobandi terrorist. While the major brunt of the genocide is borne by the Isna-ashari (Twelver) Shias, the Ismaeli Shia communties in Giglit Batlistan and Chitral currently face a wholesale massacre at the hands of Deobandi, NOT Sunni, terrorists.

It is true that Aga Khan’s own family lives in the comfort and affluence of Western high society enclaves. If ever he visits Pakistan, he is well escorted and is entertained by generals and Pakistani high society. His only capital, apart from his billions of dollars, is his snob value. How can such a person know, let alone understand, that it is ONLY the Deobandis who have been killing the Shias, Sunni Barelvis, Chrristians, Ahmadis and other minorities with state patronage. As long as his own interests and most of his disciples remain unharmed, he will continue to dance on the stage of high moral ground throwing up one gem of Shia-Sunni binary after another.

In the context of Pakistan the the Saudi Salafists are funding the intolerance and puritanical madrassas or Takfiri terror factories that fuel the Taliban. In the the broader rest of the world the Deobandis and Salafis are partners in world wide terror against everyone that is different from their uncompromising and intolerant interpretation of Islam. In the case of Iraq or Syria Shias are killed but so are Christians and others, same is true all over the world. It is not surprising that wealthy aristocrats like Prince Aga Khan or Journalists paid for my Saudi owned newspapers shy away from pointing to the real culprits and distort the facts as a Shia Sunni binary. 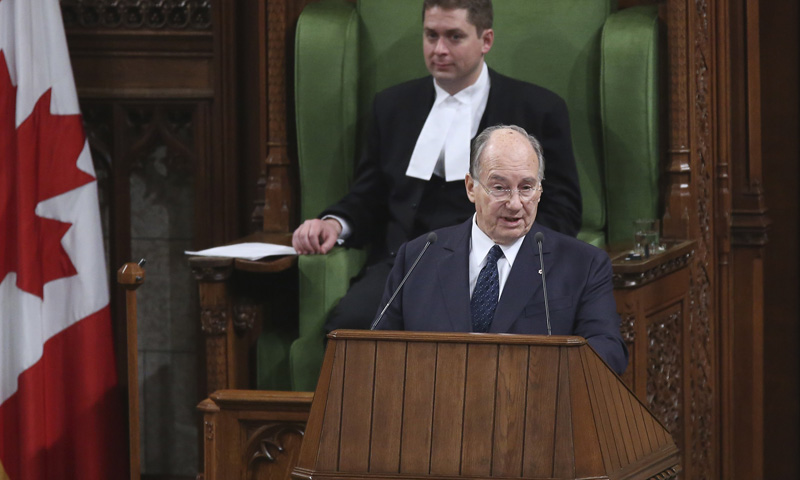 OTTAWA: The spiritual leader of the world’s 15 million Ismaili Muslims Thursday compared a conflict between Sunni and Shia Muslims to Ireland, urging the West to engage both branches of Islam.

Speaking to both houses of Canada’s parliament, the Aga Khan said tensions between the two denominations “have increased massively in scope and intensity recently and have been further exacerbated by external interventions.”

“In Pakistan, Malaysia, Iraq, Syria, Lebanon, Bahrain, Yemen, Somalia and Afghanistan it is becoming a disaster,” he warned.

To help bring an end to the strife in these countries, the Aga Khan said “it is important for (the West) to communicate with both Sunni and Shia voices.”

“To be oblivious to this reality would be like ignoring over many centuries that there were differences between Catholics and Protestants. Or trying to resolve the civil war in Ireland without engaging both Christian communities.”

Highlighting the span of the crisis, he said: “What would have been the consequences if the Protestant-Catholic struggling in Ireland had spread across the Christian world as is happening today between Shia and Sunni Muslims in more than nine countries.”

Canada is home to approximately 100,000 Ismaili Muslims, who found refuge in this country after being expelled by Ugandan President Idi Amin in 1972.

The Aga Khan himself was made an honorary Canadian citizen in 2010.