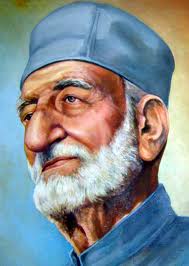 LUBP’s note: Pashtun scholar Farhat Taj has posted these public comments in response to LUBP’s post on the historical context and roots of Deobandi terrorism in Pakistan and India. https://lubpak.com/archives/306115 We invite our readers to review these comments and also the post in question. We fully trust our readers’ judgement on this matter.

Dear Pakhtano, this is a melicious and racist attempt to implicate Bacha Khan in Taliban terrorism. This is another angle of Pashtunizing terrorism and absolving Pakistan army and the Punjab for devastating the Pashtun on both sides of the Durand Line with terrorism. True, Shias are under attack and they deserve all our support. Bus no racist Pakistani non-Pashtun Shias must be allowed to intertwine Pashtun history, heroes and culture with terrorism. Dear Pashtun Shias and Pashtun Sunnis, please come forward and rebuff this racist author for distorting our history and meligning our hero.

And this racist author also has ‘profound understanding’ of Imran Khan’s politics and appreciate it. As far as the Pashtun Shias, they can go to hell along with Dewbandi and Barelvi Sunnis and non-MUslims of Pakhtunkhwa. 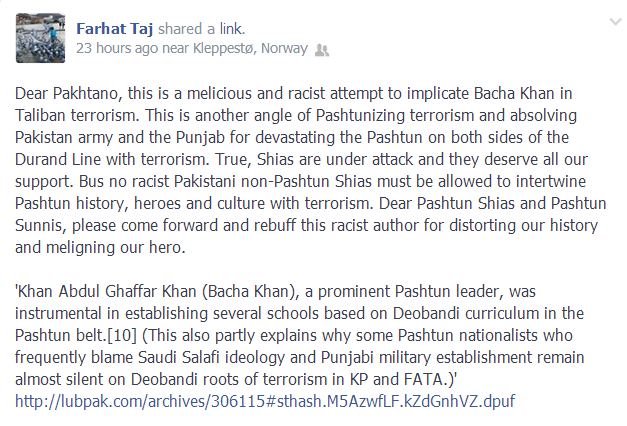 LUBP’s comment: We respect Farhat Taj sahiba and are, therefore, publishing and archiving her criticism on these pages. However, we have decided not to publish some abusive comments hurled at Shias or LUBP by some Pashtun nationalist friends in response to our post/s on Bacha Khan.

Readers are invited to read our full post on Bacha Khan which includes many references inclding from books/literature available on Bacha Khan Markaz and Darul Uloom Deoband: https://lubpak.com/archives/306211

We reiterate that from the Banu Umayya tribe of the Arabian peninsula to the Pashtun tribes of Pakistan and Afghanistan, it is not the Arab or Pashtun ethnicity which is to be blamed. It is the violent, intolerant ideology (Sufyanism of Umayyads, Takfirism of Khawarij, Salafism of Muhammad ibn Abd al-Wahhab and Deobandism of Pakistan/India and its takfiri mutation) that is responsible for brutal beheadings, organ-eatings and graphic inhumanities against non-Deobandi, non-Salafi Muslims and non-Muslims. Those who are ignoring the inherent violent nature of the Salafi and Deobandi ideologies are missing the whole point. Of course, the US, Saudi and Pakistani intelligence agencies played a key role in prostituting the Deobandi and Salafi ideologies and clerics for their strategic agendas but the very selection of these prostitutes was not a coincidence.

On LUBP web site, if we can criticize Jinnah, Bhutto, Khamenei, Zardari, Imran Khan, Munawar Hasan, Shaheedi etc (as we have in the past), why can’t we critically evaluate Bacha Khan, Ahmad Shah Durrani and Shah Waliullah?

In our view, history is more sacred than our personal political, ethnic and/or religious affiliations or heroes. Academic and historical inquiries and debates should not be discouraged or feared from.