Editors note: We have translated the the arguments proposed by the intellectually honest Deobandi Ulema and Jamat e Islami leaders like  Syed Maududi, Qazi Hussain Ahmed and Molana Tariq Jameel to name a few. The current leadership of Deoabandis has drifted towards extreme Salfism, naturally greased by the Saudi Riyal, attempting to take Deobandism to the borderline of Nasibism (enemies of the Prophet PUBHP). Jamat e Islami’s rank and file should take note of the Saudi Riyal speaking from the mouth of Munawar Hassan, where he recently equated the Grandson of the Prophet PUBHP with Yazid. Munawer Hassan’s leadership has taken  Jamat e Islami on a path to unification with Sipah Sahaba Taliban and Deobandi Terrorists.

Details of a reference given by Ibne Kaseer about a saying of Imam Ahmed bin Hambal, are here under: Once Abdullah, the son of Imam Ahmad bin Hambal, asked his father: ‘What do you think and say about cursing Yazeed’; he (Imam Ahmed) replied (to his son) why should not I condemn and curse a person on whom even Allah Himself has cursed, and then recited Surah Mohammad (Aya 22 & 23): “Would ye then, if ye were given the command, work corruption in the land and sever your ties of kinship? “Such are they whom Allah curseth so that he deafenth them and maketh blind their eyes:” Surah Muhammad (PBUH) Ayah 22 & 23 (The Glorious Quran; translation by Marmaduke Pickthall; published by Taj Company, Lahore.

After reading these Ayats then Imam Ahmed bin Hambal said…. “the group which forbids cursing Yazeed is the one who fears that by doing so it might open the gate for allowing curse and condemnation on his (Yazid’s) father (Hazrat Muawvia) or any of the companions of the holy prophet” 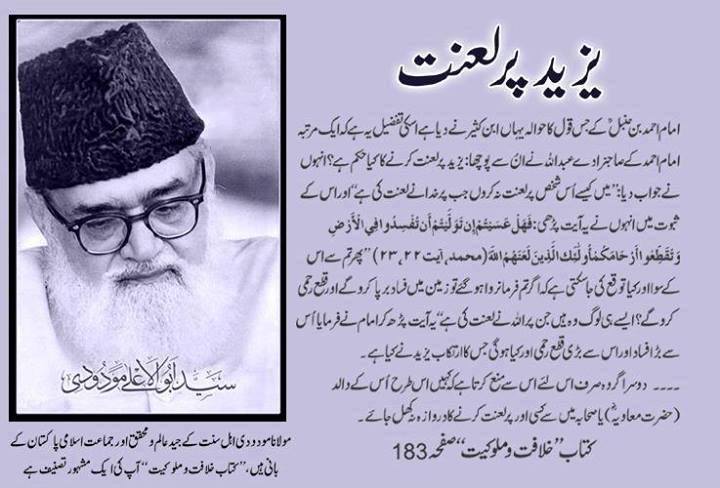