Home  »  Editorial • Featured • Original Articles   »   Editorial: Multi-pronged assault on the sources of terror is needed, not negotiations – by A Z 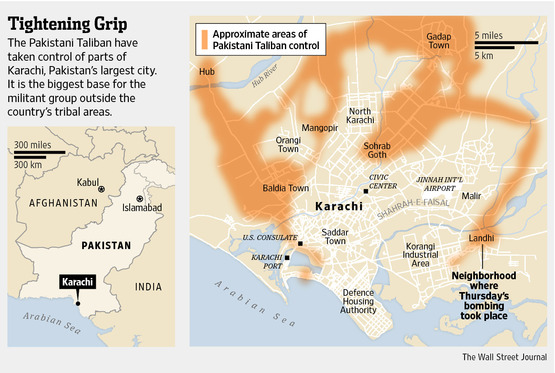 The theater of talks with the Taliban has already given them a vantage point, the government treating them as an equal partner, they have never had before. They are all over the media as an equal to the State of Pakistan. The recent air strike on North Waziristan by Pakistan’s armed forces is indeed a positive step. However, it does show Pakistan up as a free for all country. The Army has the might and the resolve to avenge itself when it is directly attacked. However, the civilian government is utterly toothless to protect its subjects, including its own policemen, let alone taking revenge when they are mercilessly slaughtered. Also sporadic attacks like this will not do the trick. Unfortunately, peace in Pakistan cannot be achieved without declaring a complete war on the terrorists. Attacks confined to FATA are like assailing the head office of a company while letting its branches and franchises operate totally unhindered.These franchises are mainly the banned organizations like the Lashkar-e-Jhangvi, Jaish-e-Mohammad and Sipah-e-Sahaba, long tolerated or even sponsored by Pakistan’s powerful military and intelligence establishment. But now they have joined the Taliban to turn on Pakistan. We know that many of these factions (like the SSP and the LeJ) have a sectarian bent that far outstrips ideological ambitions, if any. If these outfits are not being targeted then that simply means that the government does not care about the blood of Shias, Barelvis, Christians and Ahmedis that is being ruthlessly spilled across the national territory. That does not even seem to figure among the cards that the government has dealt itself to play poker with the Taliban. It also means that all the federal government cares about is to ensure peace in Punjab – especially its fiefdom in the centre and north of the province. Any operation against the Taliban cannot achieve peace, let alone a victory, unless it undertakes a fully-fledged and multipronged assault on the sources of terror in the country. The entire country needs to be roused and put on a war footing. The government is fully aware of the Taliban’s catchment area and operating bases in Southern Punjab and their fast growing influence in Karachi. So much so that the militants remain free to wipe out the entire families of those opposing them. Unless the civilian intelligence and law enforcement agencies and the Armed Forces wholeheartedly collaborate in a stretched wholesale attack against the militants of all ilks, we cannot have peace in this country. In the absence of a wholesale approach in attacking it, the TTP will step up its attacks in the urban centers, as we have witnessed in the recent weeks. They are well entrenched in all urban areas outside of Punjab, whereas the largely rural Southern Punjab provides the militant groups a haven to train and reconnoiter. The recent news-articles in WSJ and other international publications have amply described how the Taliban are tightening their noose around the country’s economic jugular – Karachi. The much-touted current operation –largely targeted at the anti-fundamentalism MQM- has made Taliban’s entrenchment in the city deeper and their advances easier. WSJ explains how the Taliban now control one-third of the Megapolis. It seems there was a secret agreement between the government and Taliban as both the MQM and the ANP stress that during the five-months of this operation the banned outfits have emerged as better organized, more entrenched, and stronger. This whole thing has turned into a mockery of Pakistan, with the Taliban running circles round the country’s government. The Taliban accept the responsibility of various terror attacks with a disdain that pours scorn on our government’s and politicians’ eagerness to placate the Taliban. The longer we shun this fight, the higher the cost for the country and its hapless people, especially those being targeted by the TTP and its cohorts. Sooner or later, this war will be upon or else the Taliban will control the country.